Following a series of experiments with iOS devices that included PLAY, a music app for iPhone, and Editions, a social reading app for iPad, earlier today AOL introduced a much larger project targeted towards the web, Mac, Windows and iOS: a completely redesigned AIM experience. Named AIM Preview and available at preview.aim.com, the new AIM service comes with new features like group and video chats, inline previews for videos and pictures and cloud sync for message history; AIM has also received new apps, especially a brand new web app, and updated Mac and iPhone clients.

I had time to test the new AIM, and my feelings are mixed. The website looks nice, and I was able to start chatting with my friends in seconds, share pictures and webcam shots, and even create group chats easily. You have access to regular AIM functionalities like “off the record” and “clear history”, and chats are organized in a left sidebar that lists Recent Chats, Favorites, and Contacts. Overall, I’d say the web app can be a nice alternative for when you can’t use your iPhone or Mac. Which brings me to the new Mac app: it looks good from the screenshots, but it’s far from perfect once you get to use it. The app supports Lion’s full-screen mode but scrolling (in the buddy list) isn’t native and it behaves like a bad copy of an iOS app. Icons are blurry, and several sections of the app take their time to load as I assume they’re web views embedded inside the app (not to mention the errors I got when first launching the app). And by sections I mean the additional stuff that AOL conveniently put into the app, such as headlines from its web properties (Engadget, Huffington Post, Joystiq) and “social” updates from Instagram, Twitter and Facebook. 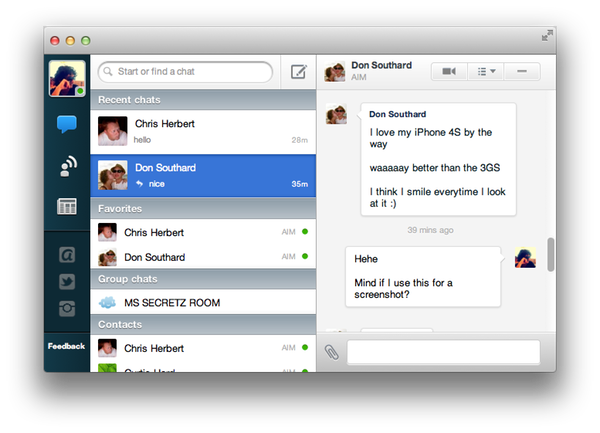 Headlines are displayed with a curious arrangement of fuzzy images and questionable typography choices. Clicking on them opens your default web browser, rather than an inline view in AIM. Social updates are equally perplexing, as you’d expect AIM to be about IM, yet AOL is trying to cram the app with additional content from other sources that live at a different rhythm than traditional instant messaging. I’m wondering why would anyone check Twitter replies and direct messages in AIM instead of a Twitter client, and I can only imagine AOL thinks some casual users will find this “cool”.

As far as actual chat goes, AIM is slower than Apple’s iChat at sending messages (I’ve seen a 1 second delay between hitting Send and the message being displayed on screen) and the Mac app shares the same functionality of preview.aim.com for inline media previews (pictures, videos, tweets) and cloud sync. I also noticed the app supports Growl notifications, but it couldn’t visualize friends’ profile pictures in desktop notifications. 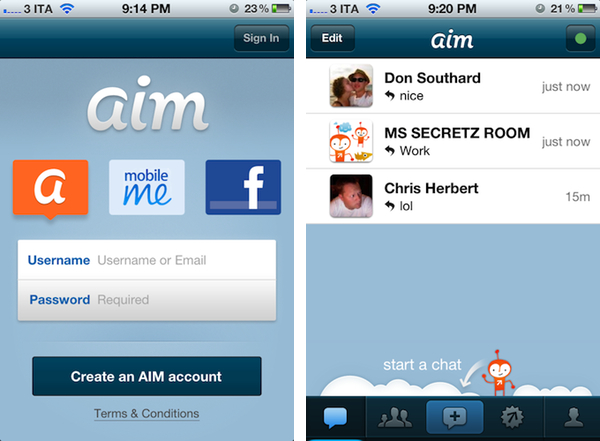 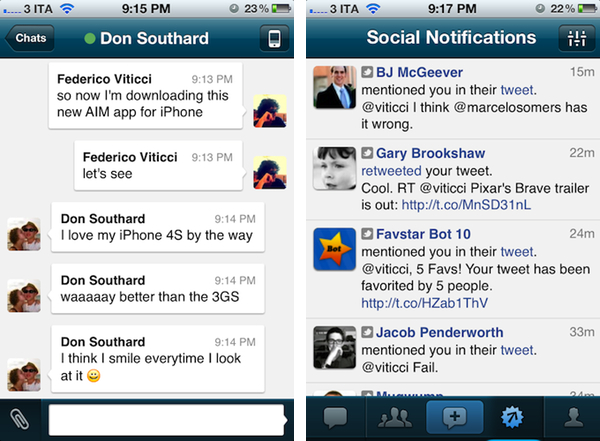 The new AIM for iPhone comes in two versions: free and $2.99 to remove ads and get additional sounds. The iPhone app left me with a more positive impression than its Mac counterpart: you can set quiet hours, tweak sound notifications, and start group chats directly from your phone. In spite of the iPhone’s cameras, I couldn’t find an option to start video chats from iOS. Social updates made their way to the mobile client too, but overall AIM for iPhone seemed more responsive and lightweight than the Mac app.

It’s easy to get excited about a massive redesign such as the one for AIM Preview. However, there are several aspects of the Mac app to fix and others to clarify about the entire service, such as headlines and social updates. You can find the new AIM at preview.aim.com, and a $2.99 iPhone app in the App Store.