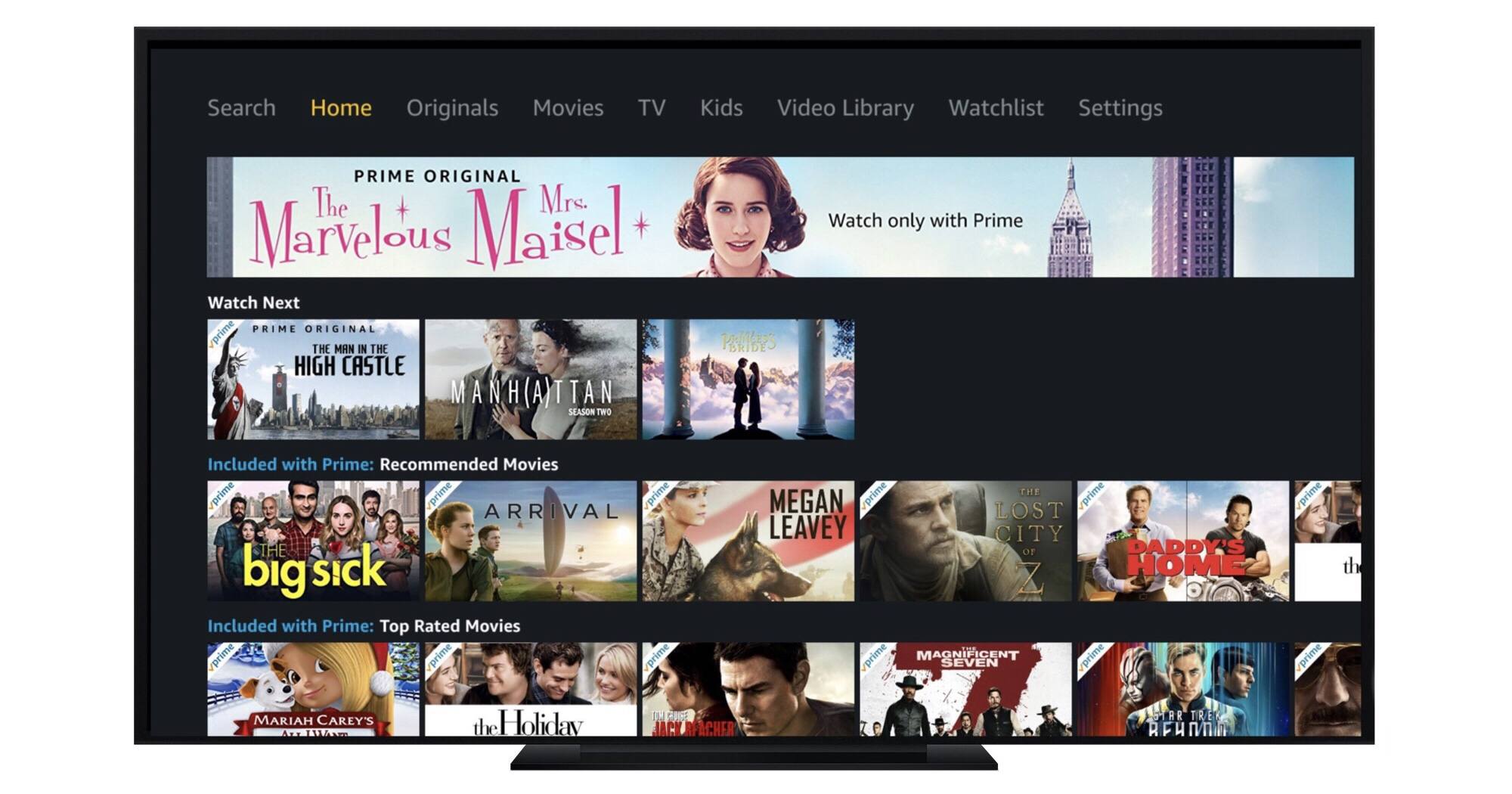 All the way back in June, at Apple’s WWDC keynote, the Apple TV-related news was limited to a single note: Tim Cook announced that Amazon Prime Video would arrive on Apple’s streaming box “later this year.” Ending a long six-month wait, that promise was finally fulfilled today: Amazon Prime Video is now available on the Apple TV.

You can press and hold Select to add content to your Watchlist.

The app’s interface will be completely familiar to anyone who’s used the Prime Video app for iOS. There’s lots of content on-screen at once, which isn’t the most elegant look, but it’s functional at least. A host of different tabs line the top of the screen, making it easy to find what you’re looking for. These include the standard curated collections of content in Home, Originals, Movies, TV, and Kids, which are joined by Video Library, where you can watch prior Amazon purchases or rentals, while Search, Watchlist, and Settings round out the selections.

The greatest benefit of Prime Video’s app isn’t any noteworthy, innovative feature it has to offer – because there isn’t one – but its integration with tvOS system features.1 Thanks to universal search, you can use Siri or a standard text search to locate content from Prime Video without needing to open the app first. Also, in line with Tim Cook’s promise at WWDC, Prime Video integrates directly with the system TV app for discovering and tracking content. 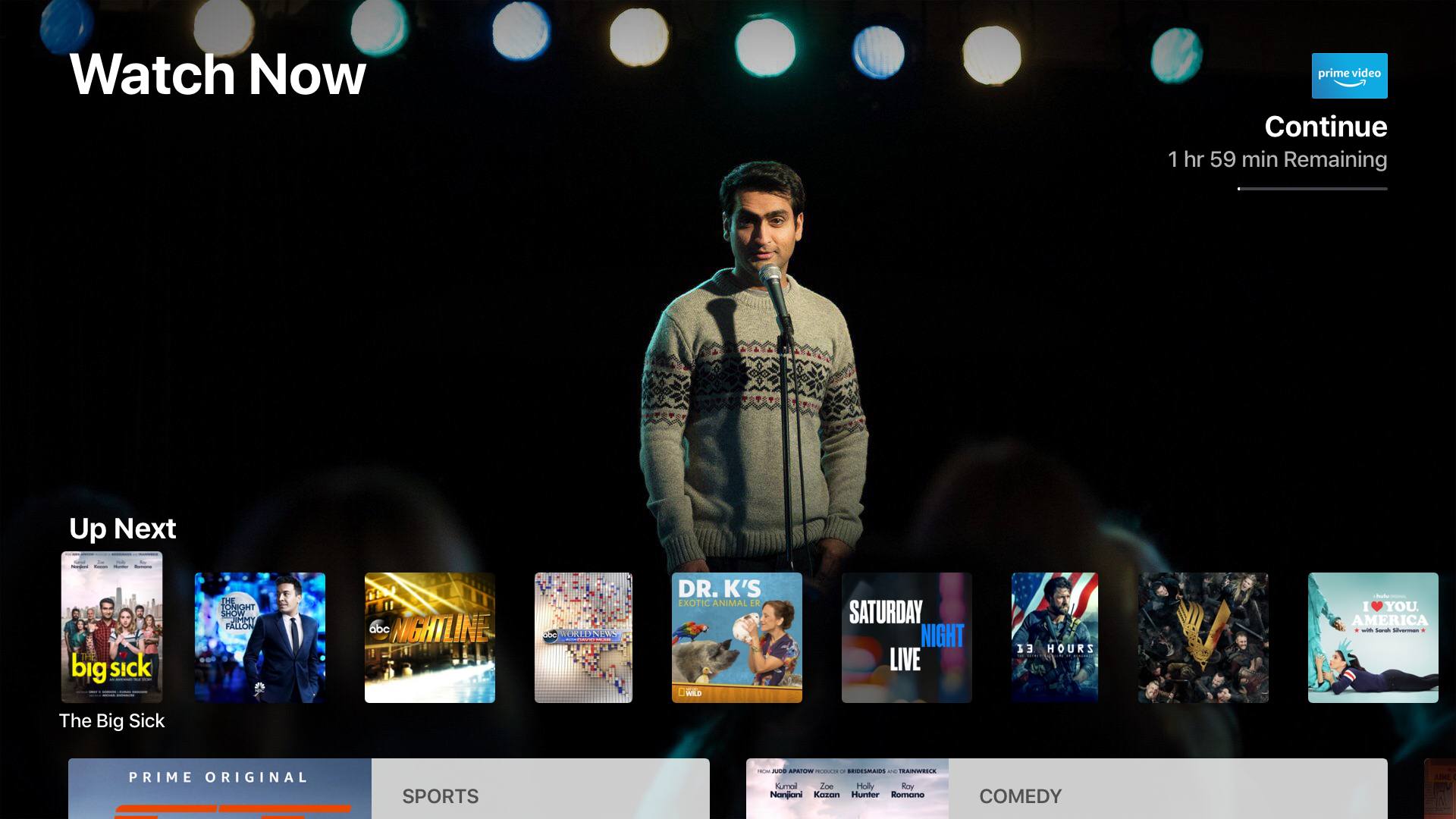 Prime Video’s integration with Apple’s TV app is my favorite detail of this release. It means content watched on the service will be tracked in the Up Next queue of TV across tvOS and iOS. I’ve been a fan of the TV app since it launched last December, and have used it as a unified hub for shows and movies watched on Hulu, iTunes, CBS All-Access, and more ever since. The inclusion of Prime Video in that roster means the only major holdout left is Netflix. While the dream would be having one unified queue for content from all services, including Netflix, we’re at least one step closer today with Prime Video’s launch.

The timing of Prime Video’s release coincides with Apple’s release of tvOS 11.2 earlier this week, which adds a new Sports tab to the TV app. This enables tracking and watching games from various sports, and is a perfect complement to Prime Video’s release due to Amazon being the rights holder for Thursday Night Football games. Starting tomorrow night, users will be able to watch NFL games using the TV app and Prime Video. 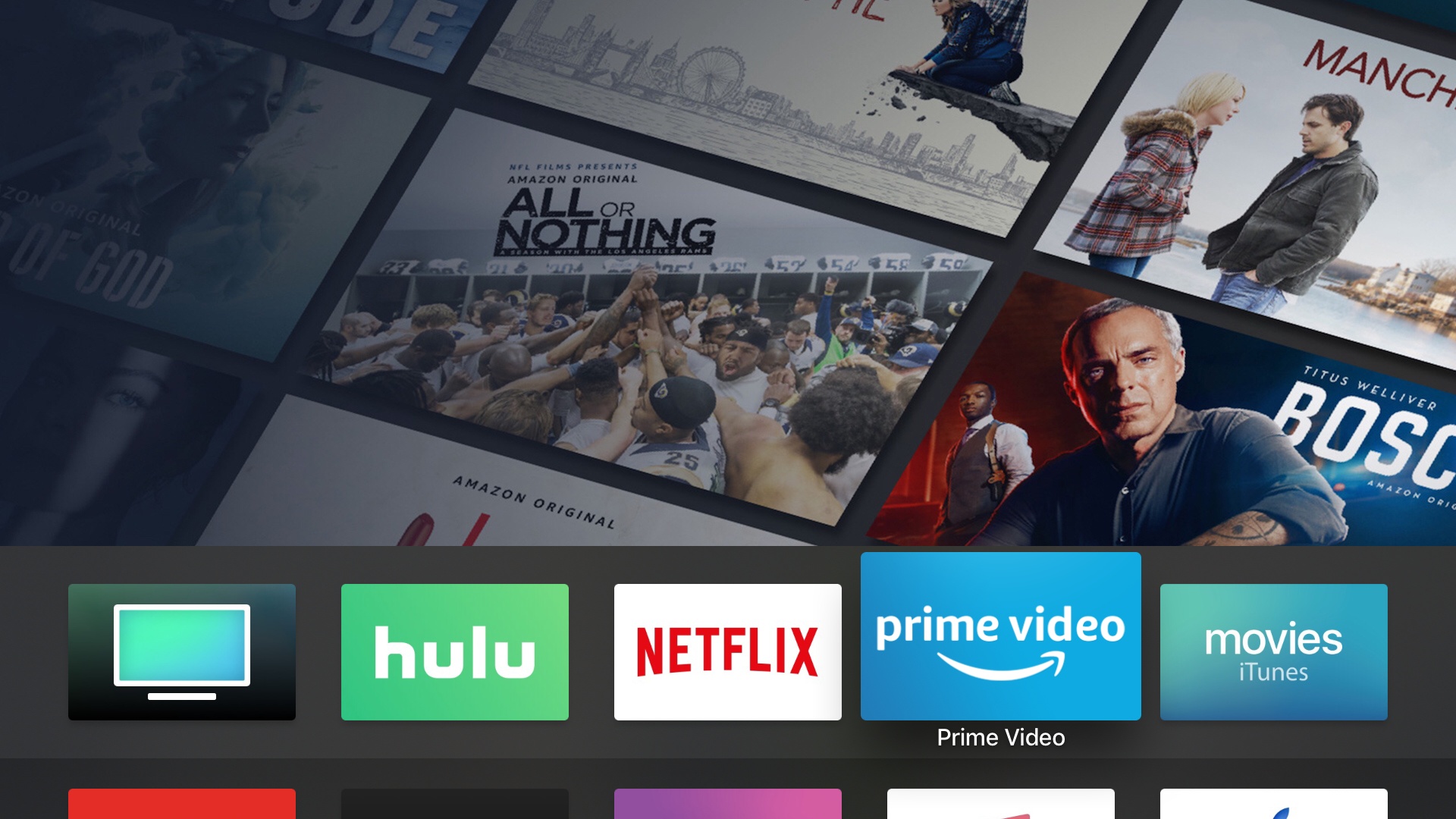 One tvOS feature the app unfortunately doesn’t take advantage of is the ability to display interactive content when positioned in the Top Shelf of your Home screen. Similar to apps like YouTube, Prime Video simply displays a static image rather than presenting anything useful, such as direct access to your Watchlist.

“Later this year” is finally here. While it almost didn’t ship in the promised time period, and the app itself doesn’t contain any innovations that would seem to justify the extended wait time, the ending of this story is a happy one. Apple TV users can now watch their Prime Video favorites right on the big screen – just in time for the holidays.

Prime Video is available on third-gen Apple TVs and later. If you’re running a fourth-gen model or an Apple TV 4K, the app requires tvOS 11.1 before it can be installed. Also of note, Prime Video’s iOS app was updated today with full support for the iPhone X and Spotlight search.