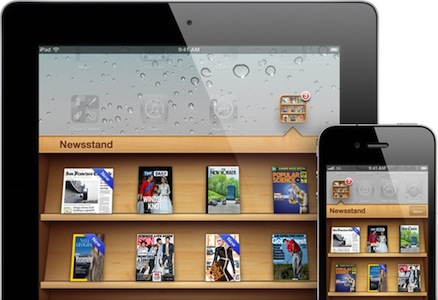 Adobe has today announced that publishers who use the Adobe Digital Publishing Suite will be able to create newspaper and magazine files that appear in Apple’s new Newsstand feature. Announced at WWDC and arriving in iOS 5 this Fall, Newsstand will allow new editions of Newspapers and Magazines to be automatically downloaded (in the background) as soon as they are made available - and storing them all in a pseudo-folder on a user’s home screen.

Today’s announcement by Adobe reveals that their Digital Publishing Suite will be able to create files that are compatible with Newsstand, allowing publishers to create and deliver new editions directly to users with little fuss. Todd Teresi, from Adobe’s Media Solutions department said the “support for Newsstand will provide Adobe’s publishing customers the ability to deliver engaging content directly to the digital doorstep of subscribers on their iPads”.

Applications built with Adobe Digital Publishing Suite and enabled for Newsstand will allow publishers to better merchandise their content with support for Newsstand push notifications and icon covers displayed on the Newsstand shelf, reflecting the latest issue of the magazine or newspaper.

This move by Adobe is quite a significant motion of support for Apple’s Newsstand feature because their Digital Publishing Suite is already used to create more than 600 titles, including high profile publishers such as Conde Naste and Reader’s Digest. With little effort, all these publishers can now add support for Newsstand.