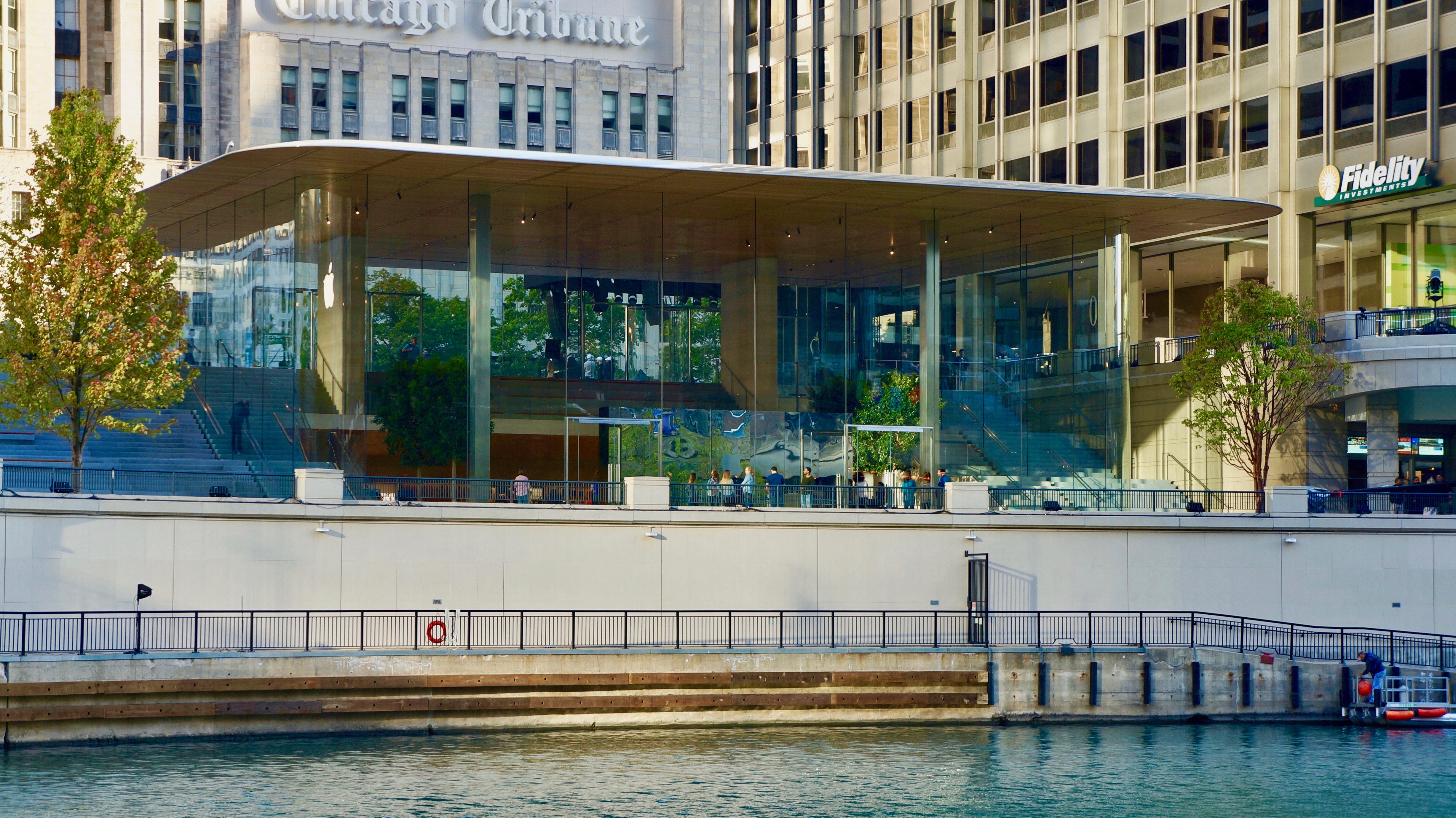 For 14 years, Apple’s flagship retail store was a fixture at the north end of Chicago’s Michigan Avenue, the shopping district known as the Magnificent Mile. Built in 2003, Apple’s Michigan Avenue location was the company’s first flagship store, featuring a glass staircase that seemed to float to the second floor just beyond the store’s entrance. Yesterday though, after many months of construction, Apple opened a new flagship store to the public along the Chicago River that reflects the new direction in which Apple began taking its retail locations last year.

The move is part of the ongoing evolution of Apple’s retail strategy:

“When Apple opened on North Michigan Avenue in 2003, it was our first flagship store, and now we are back in Chicago opening the first in a new generation of Apple’s most significant worldwide retail locations,” said Angela Ahrendts, Apple’s senior vice president of Retail. “Apple Michigan Avenue exemplifies our new vision where everyone is welcome to experience all of our incredible products, services and inspiring educational programs in the heart of their city.” 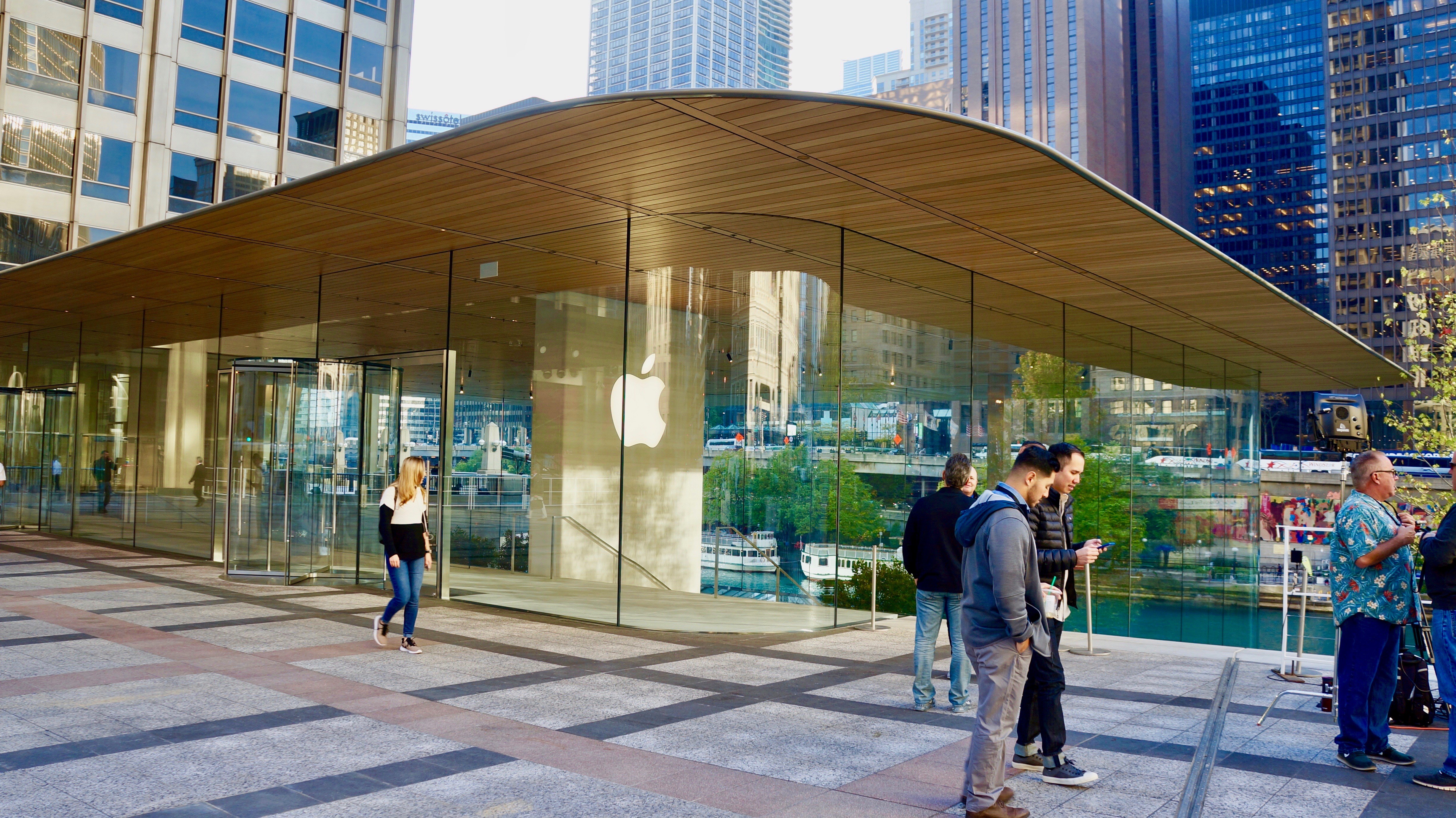 The store has moved south along Michigan Avenue to just north of the river at Pioneer Court, an open plaza between the historic Chicago Tribune Tower and the Chicago River. It’s a space where the city’s hustle and bustle comes alive with a mix of Chicagoans and tourists, and you can take in some of Chicago’s finest architectural treasures like the Wrigley Building, the Tribune Tower, the DuSable Bridge, the 333 North Michigan Avenue building, and the London House hotel. Nestled in the center of it all is Apple’s new location, which was designed by Foster + Partners, the architects that designed Apple Park. 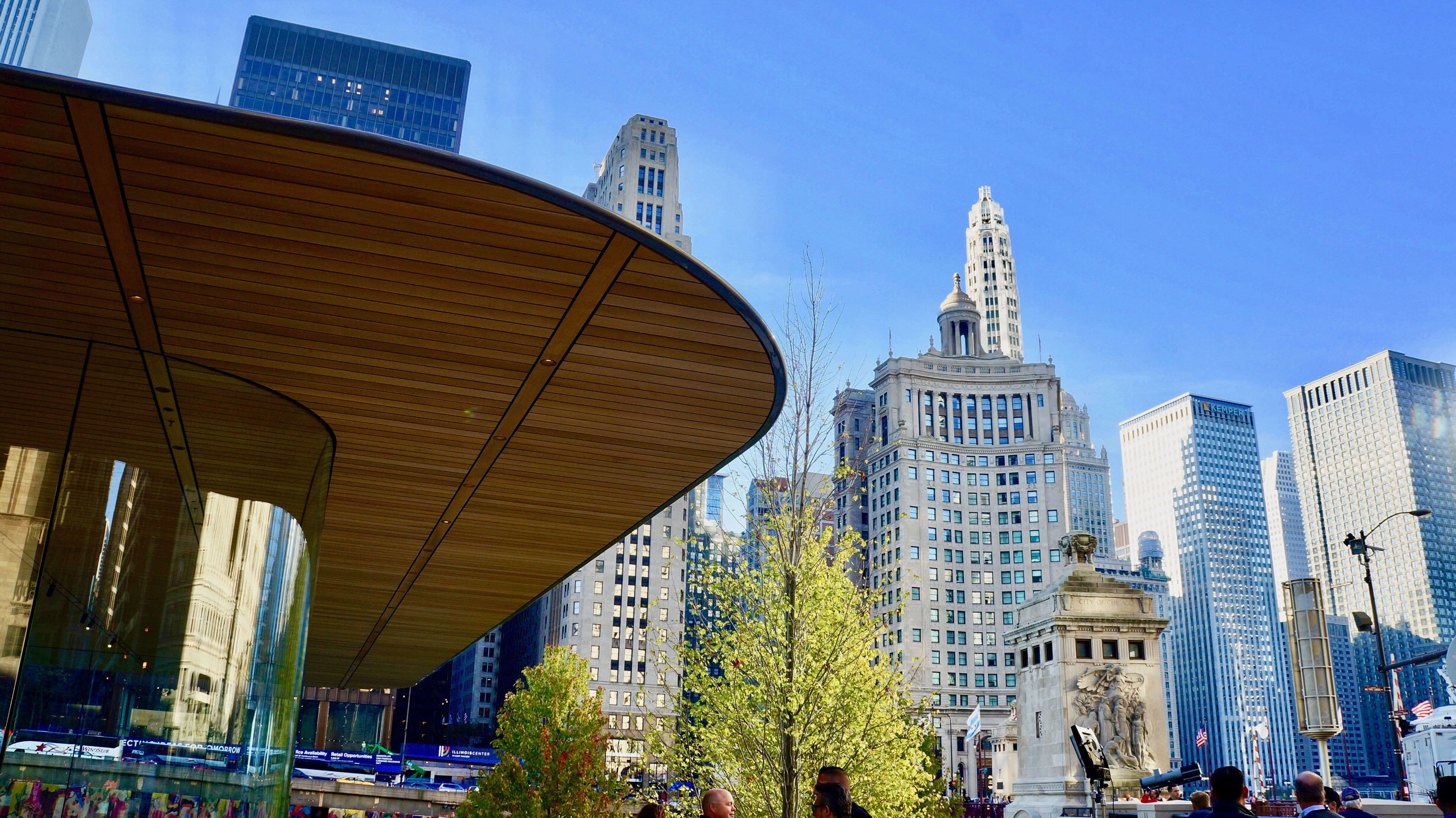 The structure, which reportedly cost $27 million to build, incorporates many of the design cues seen at Apple Park and recently constructed stores like the one in San Francisco’s Union Square. The walls are glass and curve at the corners in a way that reminds me of the entrance to the Steve Jobs Theater at Apple Park. The roof, which is constructed from carbon fiber to make it as thin as possible, resembles the top case of a MacBook. 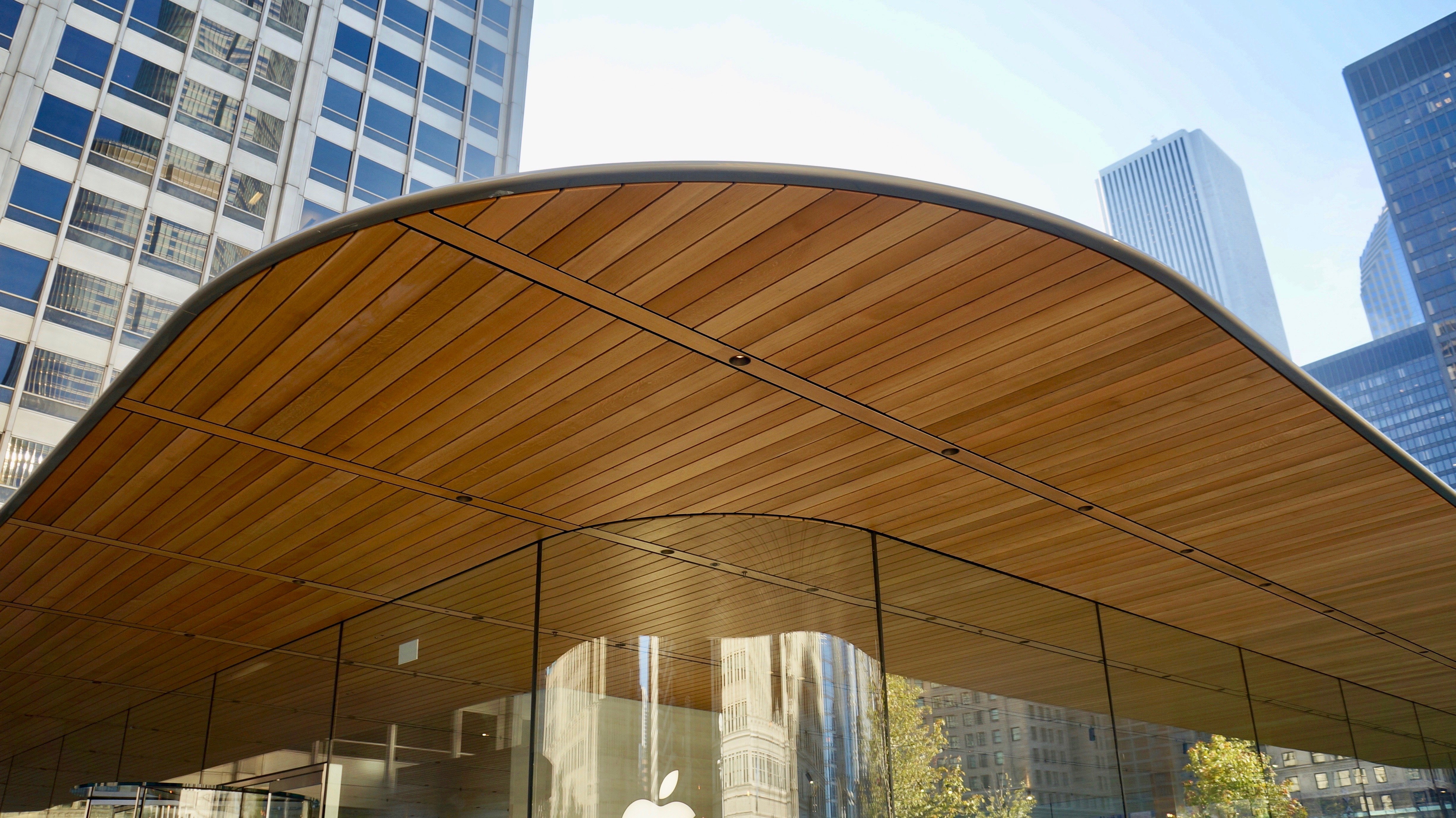 Outside, the store is flanked on both sides by granite staircases that are a continuation of the indoor stairways making the Chicago River more accessible from Pioneer Court than ever before:

“Apple Michigan Avenue is about removing boundaries between inside and outside, reviving important urban connections within the city,” said Jony Ive, Apple’s chief design officer. “It unites a historic city plaza that had been cut off from the water, giving Chicago a dynamic new arena that flows effortlessly down to the river.” 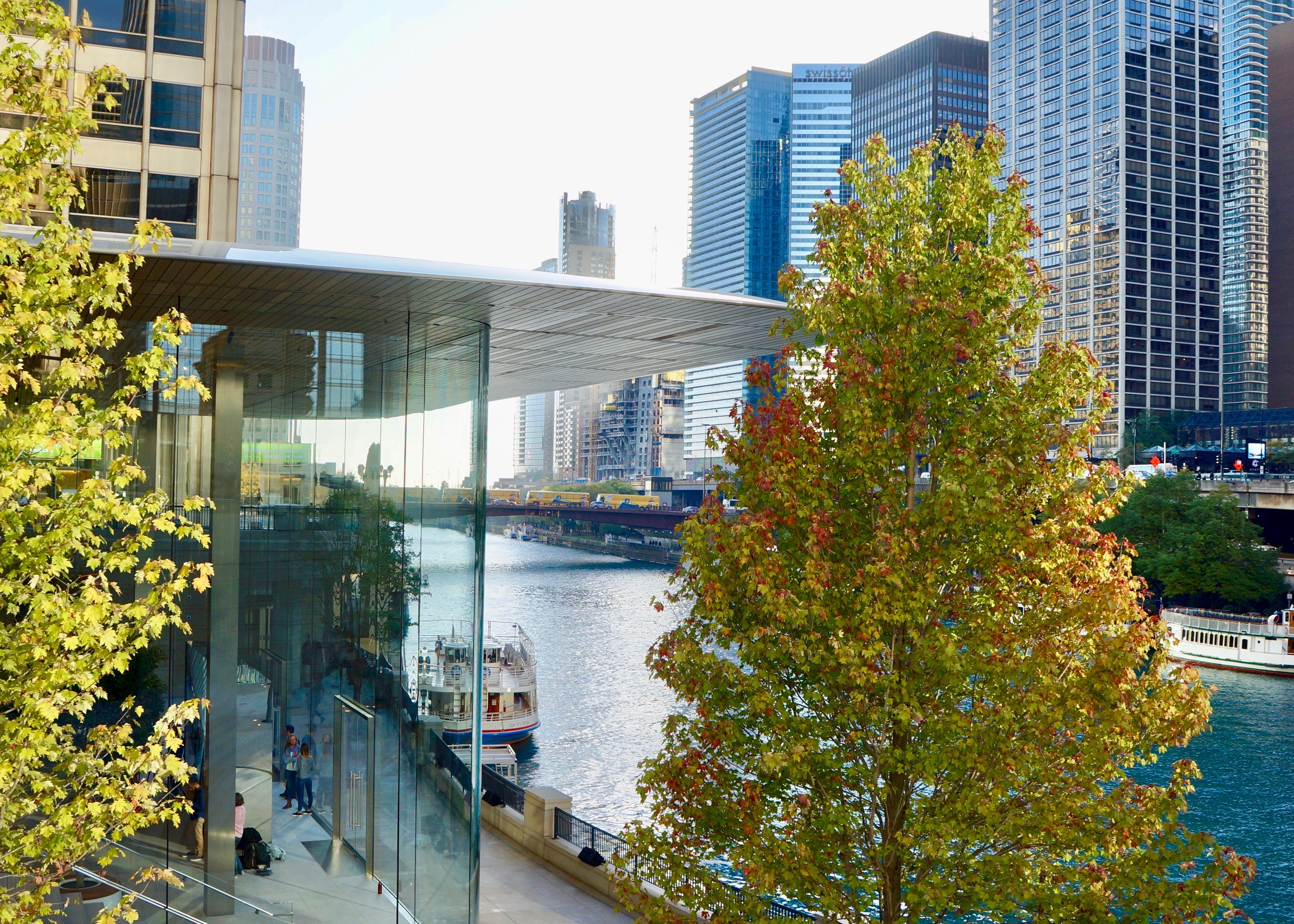 Glass walls provide an unobstructed view of boats moving down the Chicago River.

The overall effect is that the building nearly disappears into its environment, accentuating the river and its surroundings. Except for the roof overhead, Apple Michigan Avenue provides an almost entirely uninterrupted view of the city as you walk around it inside or out. 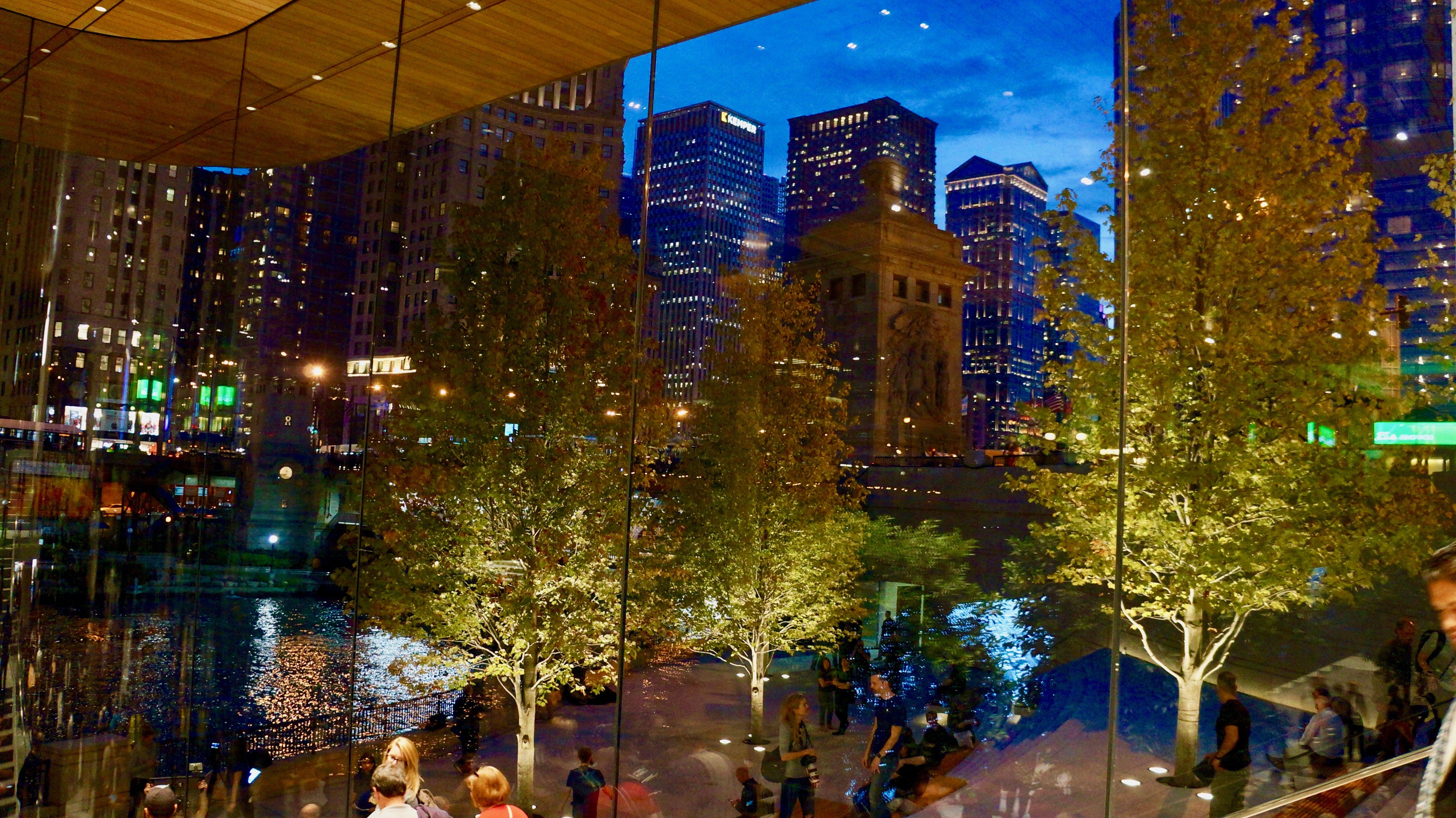 It’s not always easy to tell where the store ends and the city begins.

It’s hard to appreciate just how completely the store disappears into its surroundings unless you see it for yourself. The illusion is enhanced by even the smallest touches like the grooves in the staircases that continue from the interior of the store to its exterior. 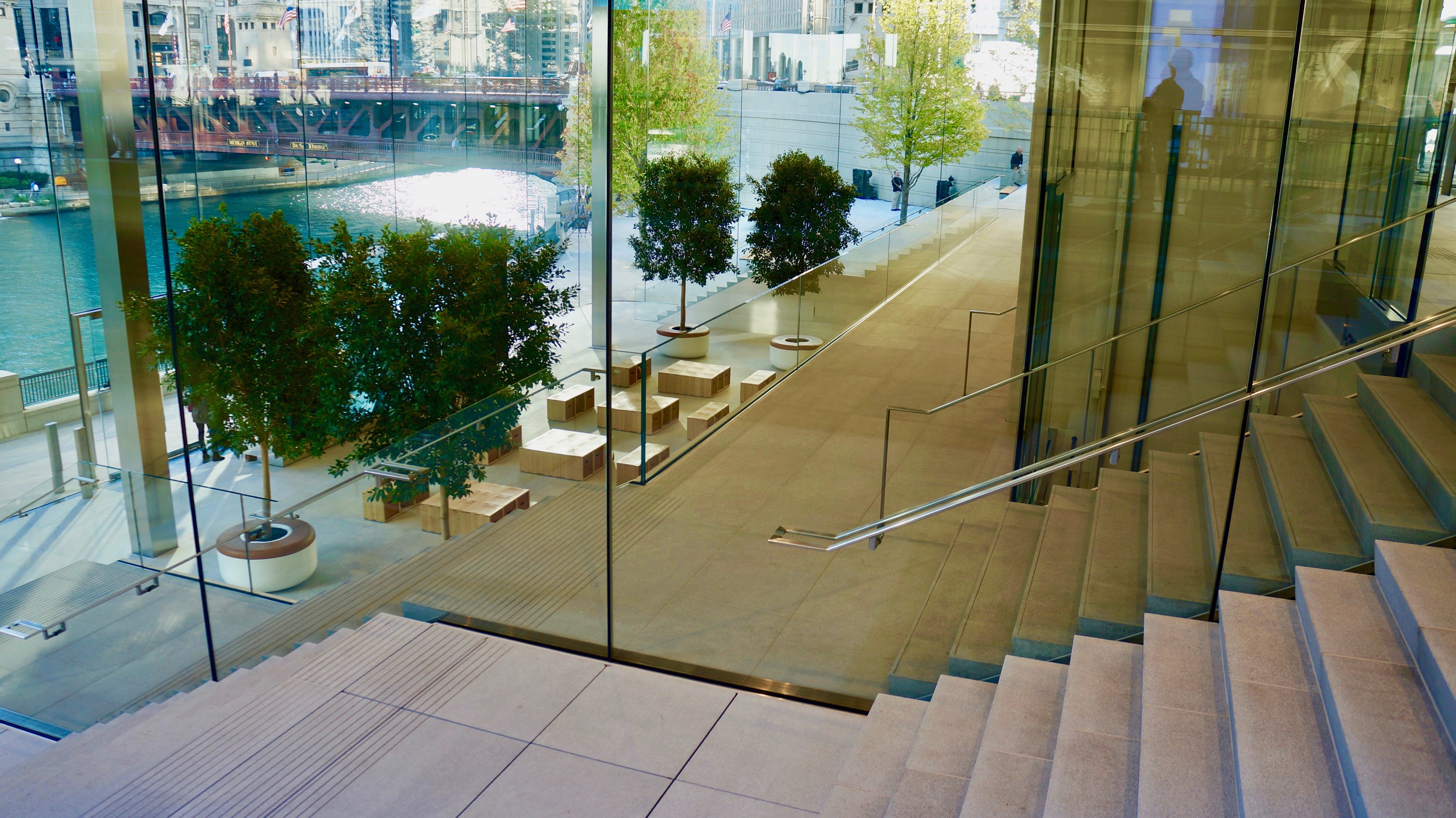 The alignment of the grooves in the stairs inside and outside the store help make the store disappear into its surroundings.

When you enter, there is a tier of seating, but the Genius Grove and main retail space are on the lower level, which is accessible from the stairs or an elevator. The center of the lower level is dominated by a huge high-resolution screen that was showing black and white scenes of Chicago during the grand opening. 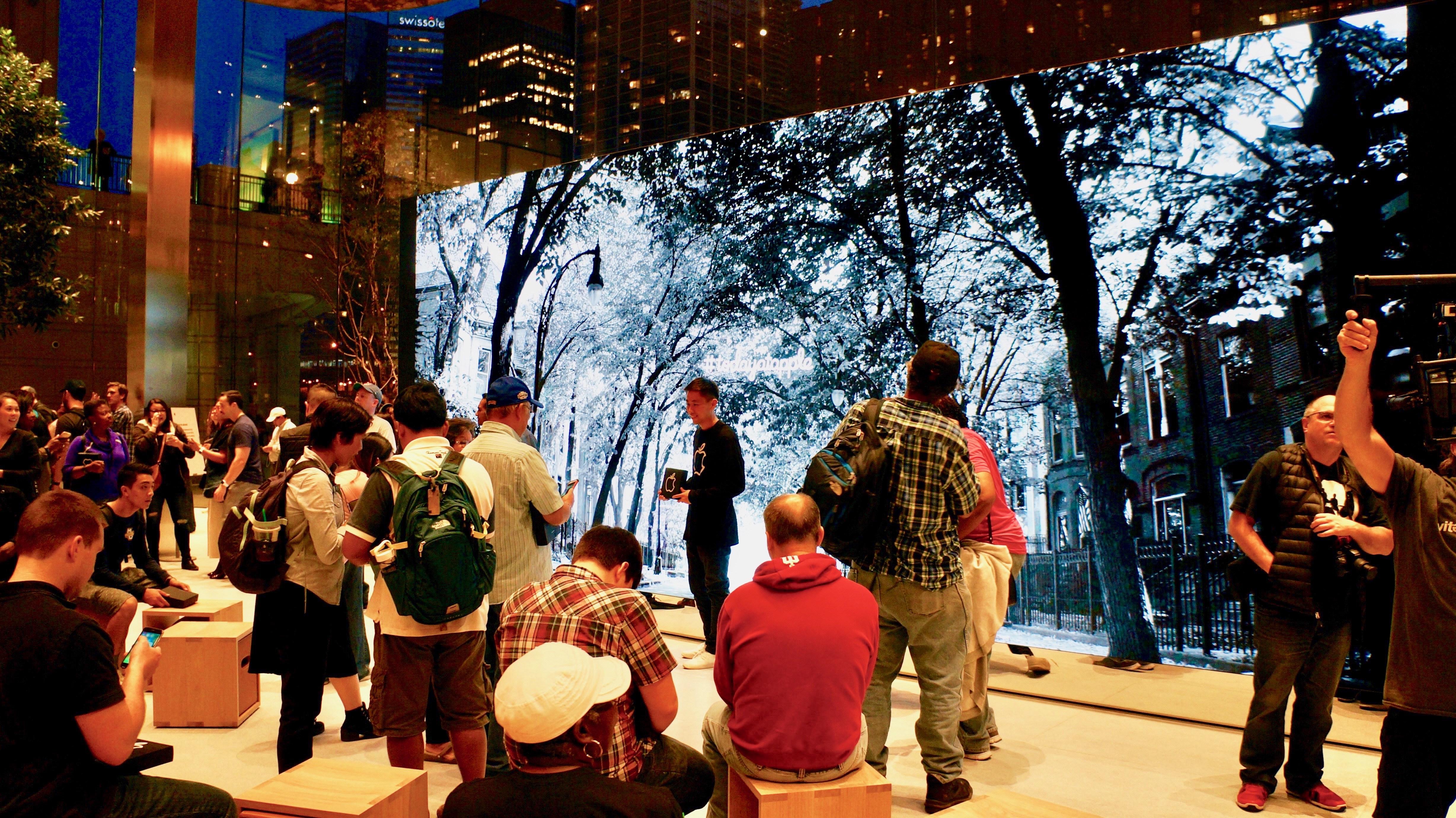 The giant high-resolution screen on the lower level of the store commands your attention.

The back of the giant screen is polished metal with an Apple logo in the center that reflects the city back into the store. 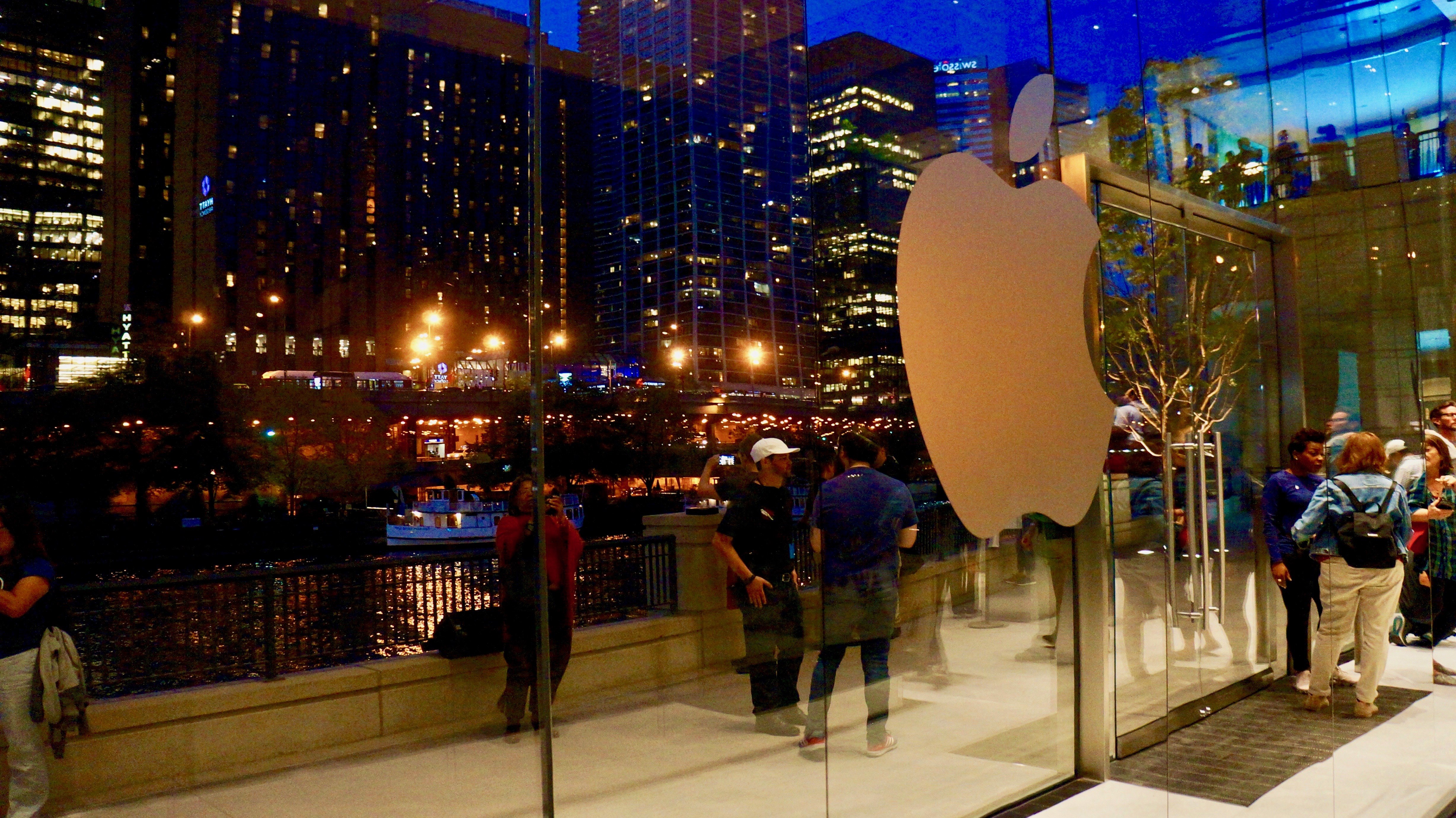 The city reflected on the back of the store’s enormous display.

Tucked underneath the upper level are the familiar tables of iPhones, iPads, Macs, and other items for sale, which are so well hidden that you might not realize they are there until you get to the lower level and turn around. 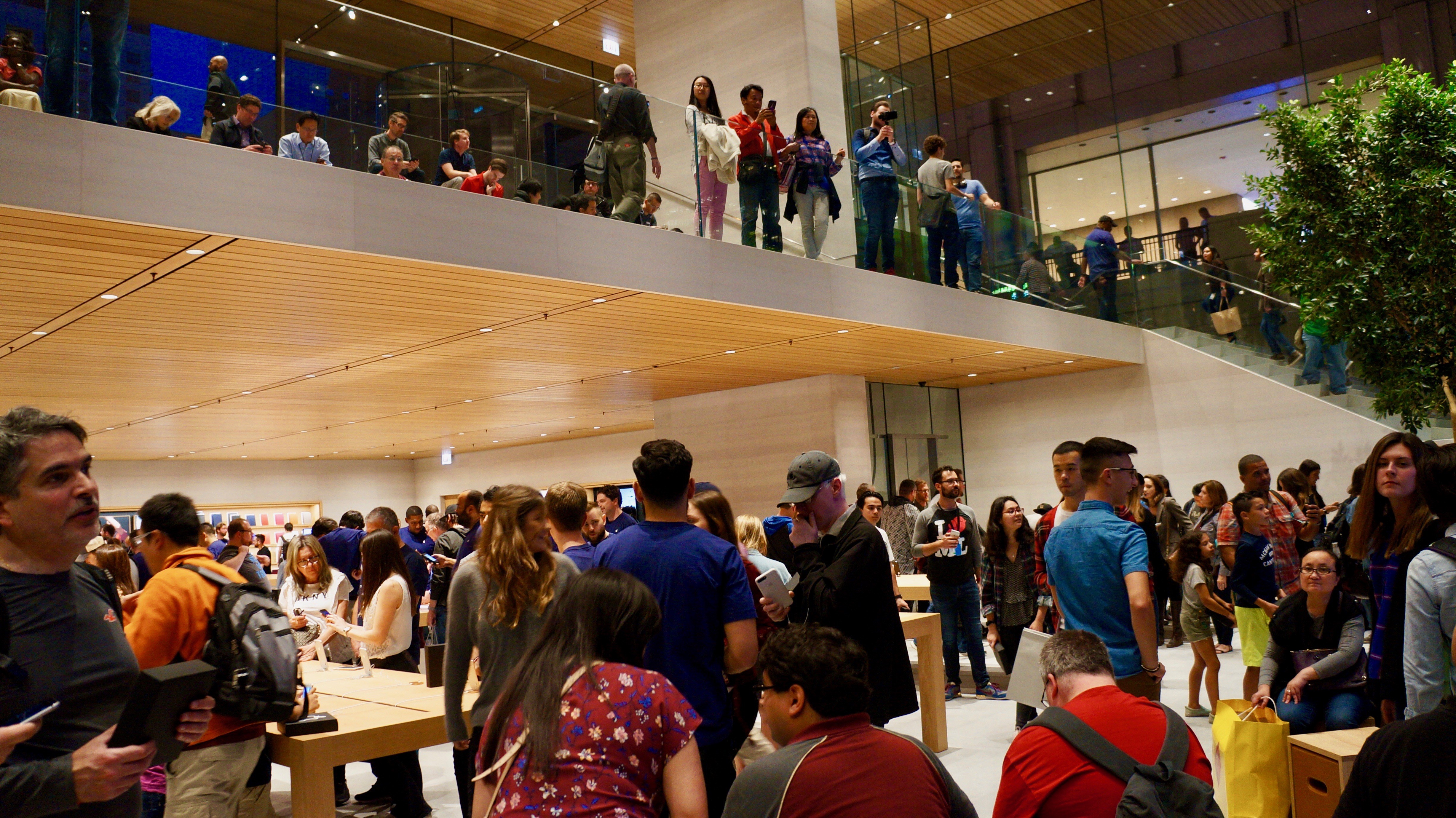 Familiar tables of iOS devices and Macs extend under the stairs and top level of the store.

On Monday, Apple will continue the celebration of the store’s opening with ‘The Chicago Series,’ a month-long series of activities and events with a focus on Chicago entrepreneurs and creatives that is part of the Today at Apple program.

I’ve had the opportunity to visit several of Apple’s flagship stores and what I like most about each is that they incorporate their surroundings and the unique culture of each city. Chicago’s new location is no exception, succeeding in bringing the outdoors inside and showcasing the Chicago River, one of the city’s most important landmarks.