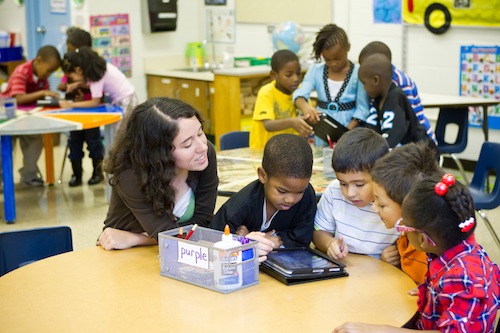 In the past months, we’ve heard several stories about the iPad being deployed in education with pilot programs aimed at testing the device in educational contexts Apple perhaps didn’t think about in the first place as a possible main focus for the tablet. Many schools all over the world have shown interest in the iPad, mainly thanks to the large selection of software available that makes it easy for teachers to find exactly the apps they need, and for students to be engaged with a great digital experience. Singaporean schools added iPads to their teaching resources, and a $100,000 school program we mentioned last December got every 4th grader at two elementary schools in Hancock Count an iPad full of apps for reading books, doing math, and so forth. Overall, the biggest surprise wasn’t the iPad itself as a technological advancement: rather, it was about how student of every age interacted with it and was willing to learn more through software that impressed teachers, Apple, and bloggers.

Of course there’s more coming. The iPad 2 was released a few weeks ago, and those schools that didn’t have the chance to deploy it in their educational program last year now can have access to an overall better device, with a thinner and lighter design and better battery life. A new $200,000 program was approved in Auburn, Maine to give every kindergarten of the district access to this new teaching resource that is Apple’s iPad, complete with apps bought from the App Store and “insurance” (we assume it’s AppleCare). The district has bought 285 iPad 2s to use in the classroom; eventually, all elementary schools in Auburn will get an iPad as the program begins its rollout in May, and should be completed by the end of September. The 285 iPad 2s are only part of the initial rollout.

So why did the school board approve the program? Because teachers who owned an iPad saw an improvement in how kindergarten kids were learning the alphabet (always a difficult task) thanks to educational apps. So rather than buying new laptops (which are expensive), the district and the school board opted for iPads. Simple as that.

Maybe Apple didn’t expect this quick success in education, or maybe they saw this coming all along. I don’t know. What I do know, though, is that – once again – it’s not really about the specs, the RAM or the openness. These teachers could have asked for Xooms but they didn’t. It’s about the platform, the experience, the pleasure you get from using a device, the intersection of technology and liberal arts. There’s nothing more honest and genuine than a kid having real fun, and if educational software can do that whilst retaining its ultimate purpose of teaching stuff – then I think we have a winner here.

Check out the news video below. [via TUAW]