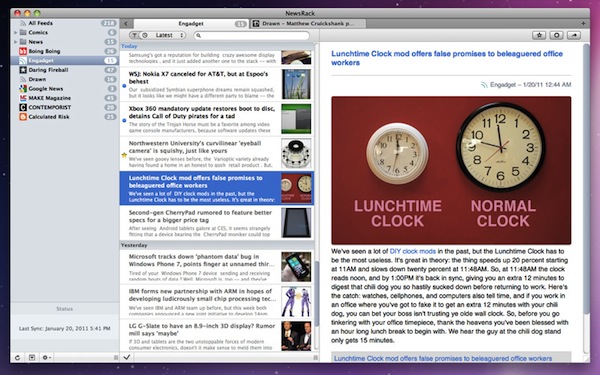 NewsRack is a RSS feed reader for iPhone and iPad that’s very popular among iOS users and used to be many people’s favorite choice in the App Store before Reeder came out. Especially in the early iPad days, I remember using NewsRack to stay up to date with Google Reader; the app is fast, stable and provides an elegant approach to RSS feeds. Silvio Rizzi eventually released Reeder for iPad, but I’m pretty sure NewsRack still has a loyal user base out there.

Last night, omz:software released a new version of NewsRack in the Mac App Store. The app is new to the Mac platform, and exclusively available in the Store at $6.99. NewsRack for OS X is very similar to its iOS counterpart: native interface with a sidebar for feed and folder management; unread articles in a middle panel and feed preview in the right column. The app has got a tabbed interface à la NetNewsWire to navigate between websites easily with tabs that sit on the top of the main window. NewsRack syncs with Google Reader but you can also import your feeds manually, although I wonder if there’s anyone who’s still doing that - especially considering cross-platform RSS syncing between OS X and iOS.

The app supports drag & drop for feed management, keyboard shortcuts for tabs and refresh, thumbnail previews for feeds – which should come in handy if you’re subscribed to several photo blogs and you want to quickly skim through their latest entries. Overall, the design looks really polished and based on usual OS X interface guidelines.

Personally, I don’t think I will move away from using Reeder just yet. Silvio Rizzi’s app is still in beta, but we’re pretty confident it will find its way to the Mac App Store soon. If you’re looking for a good alternative though, NewsRack in the Mac App Store is a great choice for now.