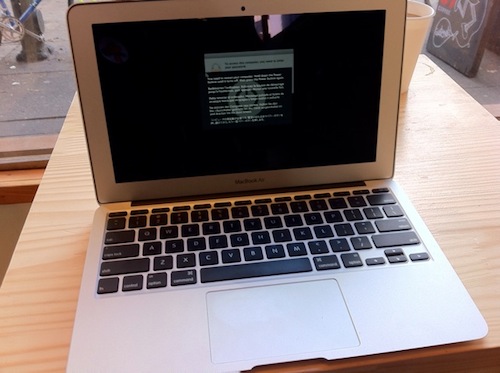 According to a report bu Cult of Mac, and confirmed by further analysis on Macworld, a pretty large number of MacBook Air early adopters are experiencing screen issues such as “weird colors in vertical lines”, freezes, crashes and “horizontal sparkling bands”.

Additional reports about the video problem have been posted to Apple’s discussion forums and for the people reporting it the symptoms can vary. I’ve even encountered the problem myself on my 13-inch MacBook Air.

The problem with kernel panics has been experienced by Cult of Mac staff that purchased 11-inch or 13-inch models. Users on Apple forums haven’t complained about this specifically yet, but they have been complaining about their new MacBook Airs crashing.

Even after the software update Apple issued the same day the new Air models were released, several users have reported persistent issues. There’s also a video recorded by a Cult of Mac showing the aforementioned flickering issue on the MBA screen.

As MacRumors also noted, Macworld chimed in as well:

Sadly, I can personally confirm these issues: Just two days after unboxing my 11-inch Air - the base model with 4GB of RAM - the notebook randomly cut to a gray screen during Screen Sharing and only a reboot could cure it. In the ensuing days, I’ve seen my Air’s screen turn a variety of colors: gray again, tan, gray-black, and - on Monday - blue! (Let’s everyone get their Blue Screen of Death jokes out of the way now, please.)

As I was working on something different in every instance, it was hard to say exactly what triggered the crashes, though Screen Sharing has been the culprit at least twice. Neither a PRAM nor SMC reset did much to help.

The Cult of mac staff also experienced kernel panics during wake from sleep on both 11-inch and 13-inch units. Apple hasn’t issued an official reply or support thread yet, but faulty units are pretty common in every product release.