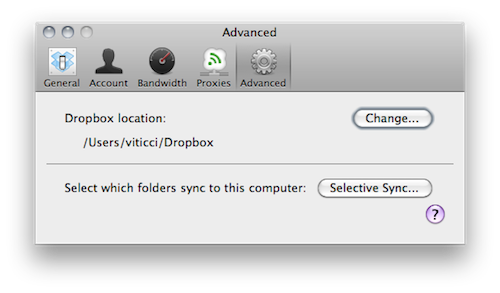 Dropbox, one of our favorite sync services here at MacStories, just hit version 1.0 on the desktop. The new build, released for Mac, Windows and Linux, it’s available for download on Dropbox official forums here.

If you’ve been following the development of Dropbox for Mac closely, then you know that this 1.0 build is actually a “remixed” version of the 0.8 that’s been available on the forums for a few months now. Dropbox 1.0 comes with a redesigned preference window that makes it easy to check on your computer’s settings and your account information, but the real new feature is selective sync: located in the Advanced tab in the settings, selective sync allows you to choose which folders already on your Dropbox account you want to sync back to your computer. If you want to keep a folder online but not locally, it will not download or sync to your computer. Very useful for files you just want to keep a backup of, but not an actual local copy.

Dropbox 1.0 is available here. As for what you can do with Dropbox, here’s where to start. Check out the full 1.0 changelog below.

* Stop the Dropbox location changer widget from jumping all over the place in the tour.

* New “Easy Relink” dialog in the tour. Now when you link with the same account as a previous installation you will be greeted with a fast path to configuring Dropbox. This retains your Dropbox location setting as well as your selective sync settings.

* Selective sync is optimized to finish *a lot* quicker when changing settings during initial sync.

* The Dropbox tour is now more careful about merging your dropbox with a previous installation.

* Better handling of folders which names like “.dropbox” or “Desktop.ini”, having folders with these names could cause Dropbox to spin in some syncing situations.

* Dropbox will now be more aggressive about making sure to not add duplicate entries to the Finder sidebar.

* Fix random bug that would prevent preferences to show up when you opened it for the first time at a rare point on Windows.

* Don’t enable Growl notifications for all compatible apps if you didn’t have Growl installed before installing Dropbox.

* “Move Dropbox” was broken in some cases on Windows, now should be a lot better.

* Fix the context menu not showing up sometimes on Mac OS X versions before Snow Leopard.