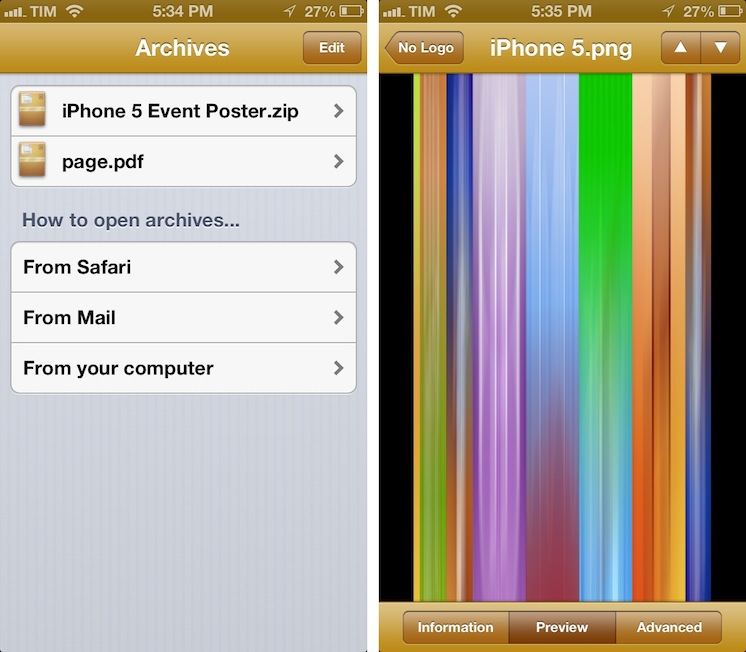 I have been using The Unarchiver for years now. It’s been listed in my Must-Have Mac Apps roundups, and I recommend it to every friend who, after switching from Windows to OS X, asks me about “WinRAR for Mac”. The Unarchiver is a powerful and simple extraction tool with support for multiple formats and a set of user preferences to configure in the Settings.

Developer Dag Agren has also released a paid iOS app for The Unarchiver. Initially buggy, Dag has been busy improving it and making it more reliable on iOS 6. Called Archives, it is based on The Unarchiver, which means you’ll get support for a plethora of formats. The app lets you look inside archives and preview files before extracting them; you can open a file in other apps that support the format using Open In, you can save images to the Camera Roll, and check out advanced information for each file. I have found Archives to be particularly useful in previewing files from Mail or Safari. Archives is $1.99 on the App Store.

Last, inspired by Archives for iOS, Archive Browser for OS X is a paid version of The Unarchiver with support for browsing and previews before extraction. It supports Quick Look, and it’s $3.99 on the App Store.