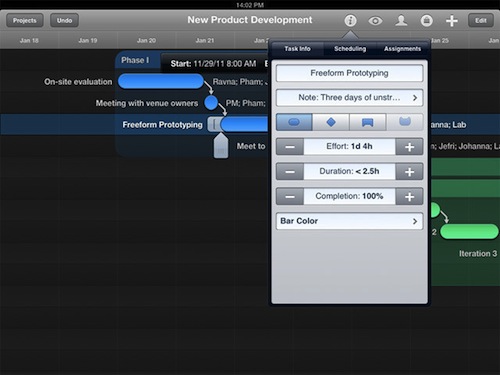 At Macworld|iWorld 2012, which kicked off yesterday in San Francisco, iOS and Mac developer The Omni Group offered a first preview of an initial build of OmniPlan for iPad, and detailed some of their upcoming plans for the suite of apps they offer to Mac, iPhone, and iPad users.

As reported by Ars Technica, an iPad version of The Omni Group’s project planning and management application, OmniPlan, should be released in the second quarter of 2012. That puts it right on schedule for a possible WWDC release, although The Omni Group’s CEO Ken Case didn’t commit to a specific ETA when commenting on the app’s release. Similarly, Case didn’t give any details on pricing, except that we should expect the same pattern that happened with the Mac versions of OmniFocus and OmniGraffle – the iPad apps being sold at roughly half the price, yet with equally powerful functionalities.

When we spoke to Case at the Macworld Expo last year, he told us about the company’s plans to update OmniPlan on Mac OS X to version 2.0. That version included a major overhaul to the backend engine, which improved cloud syncing abilities and offered integration with the GTD-based task manager OmniFocus. OmniPlan for the iPad will use the same engine, making it possible for multiple users to update project plans simultaneously. Those changes can be reviewed, approved, or rejected using the iPad just as on the desktop.

The early build we saw this week wasn’t complete, but the UI made full use of pinch and swipe gestures to control how much of a project’s timeline was in focus at any given time. Multitouch gestures also make it easy to manipulate task times and connect tasks and milestones to others to establish dependencies.

For current Omni customers, Case has confirmed that iPad versions of OmniGraffle, OmniGraphSketcher and OmniOutliner will get a new document management interface with iCloud support. The change is much needed as Omni’s current document-based sync isn’t the most automatic or user-friendly out there, and iCloud would hopefully make everything easier and reliable, while still keeping the old webDAV and exporting options available.

Looks like it’s going to be another great year for The Omni Group.