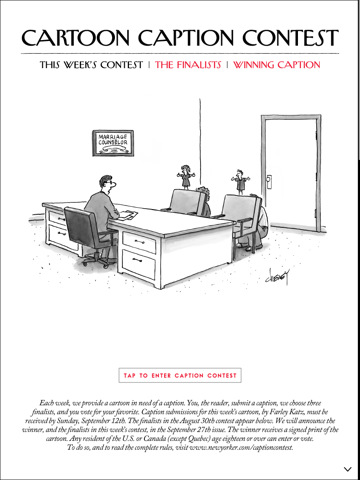 The New York Times profiles the status of The New Yorker iPad app, which was released in September 2010 but implemented iTunes subscriptions last May. According to The New Yorker, over 75,000 print subscribers have taken advantage of the offer to download the iPad app for free, whilst “several thousands more people” are downloading $4.99 single issues each week.

Offering the first detailed glimpse into iPad magazine sales since subscriptions became available in the spring, The New Yorker said that it now had 100,000 iPad readers, including about 20,000 people who bought subscriptions at $59.99 a year.

In the old in-app purchase model, The New Yorker used to sell single issues-only at $4.99. Since Condè Nast rolled out subscriptions for many of its magazines in May, the publication adopted a new model with subscription to the weekly magazine priced at $5.99 per month (or $1.50 per issue) and full annual iPad access at $59.99. Unlike several other digital versions of magazines ported to the iPad (many of them sold by Condè Nast itself), The New Yorker took a different approach: rather than re-working its information architecture to present articles alongside lots of images, “interactive ads”, video, and infographics, The New Yorker went for the simpler route of presenting readable text on screen. And as The New York Times reports, this strategy seems to have worked really well for them:

The New Yorker, a magazine that has always been heavy on text, took a different tack from its peers. Instead of loading its iPad app with interactive features, the magazine focused on presenting its articles in a clean, readable format.

“That was really important to us: to create an app all about reading,” said Pamela Maffei McCarthy, the magazine’s deputy editor. “There are some bells and whistles, but we’re very careful about that. We think about whether or not they add any value. And if they don’t, out the window they go.

Read the full report – including some remarks from the magazine’s editor David Remnick – here. [via Poynter]