Personal Search Results In Google with CloudMagic and Evernote 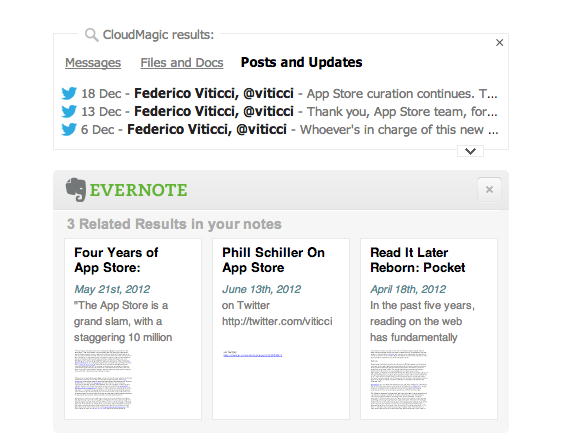 Following my decision to switch back to Google Chrome as my default desktop browser, I have installed two extensions that are making Google search results more useful for me.

Last week, I installed the Evernote web clipper for Chrome, which was capable of displaying my own Evernote notes alongside Google’s search results. This means I can look for, say, “AppleScript iTunes” and likely find something that I had already clipped in Evernote in the past. It is a powerful addition when combined with Evernote’s new Related Notes feature; it also allows me (in the extension’s options) to make the thumbnail results open directly with the Evernote Mac app when clicked. Evernote announced yesterday the possibility to have the same kind of inline results with Safari.

The second addition is CloudMagic’s new extension, which I discovered today thanks to TechCrunch. MacStories readers know why I like CloudMagic:

CloudMagic is fast: it can search across thousands of indexed items in seconds, with results updating in real time. It is astonishingly accurate, even when it has to match a couple of words with, say, hundreds of tweets from last year or an Evernote PDF inside a nested notebook. I use CloudMagic on a daily basis to retrieve old tweets (as reference material), email messages, or notes; in fact, I would say the app has better search than Evernote’s iOS app. Which, by the way, is supported with an URL scheme – so you’ll be able to search notes and open them directly in the Evernote app.

The new CloudMagic extension is exactly what you think it is. Once installed, it’ll find results for your Google query by looking inside the accounts you’ve already configured with CloudMagic. By using both Evernote and CloudMagic, I can get Google results in an instant (the main Google search results load first), then get relevant results from my email inbox, Twitter accounts, Dropbox and Evernote notes, and more Evernote related notes thanks to Evernote’s different algorithm. I would say that 50% of my searches are for items that I have already saved in the past but that I have also likely forgotten about. CloudMagic and Evernote results in the browser allow me to keep using Google but also have my own results show up alongside the normal search I’m used to.