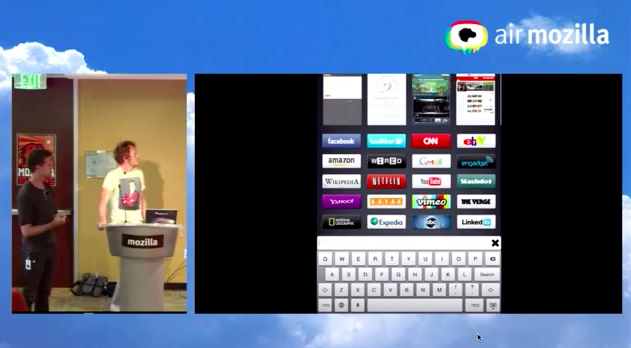 So here comes the fun stuff,” said Alex Limi as he began discussing the prototype iPad browser Mozilla has been working on for several months. “We wanted to make something entirely new. We wanted to look into how we could reinvent the browser for a new form factor,” he said. He goes so far as to deem Safari for iPad “a miserable experience” all the while acknowledging that it remains the best option available in terms of tablet-based browsing. iOS is a platform where Mozilla has yet to make an impact, he admits. “There are a lot of reasons we should be on iOS even though we can’t bring our rendering engine there.” Ultimately he says Junior was born out of necessity: as of now, Mozilla has “no vehicle on one of the biggest consumer platforms in the world.

According to Mozilla’s own blog post, Junior (which hasn’t been given a release date) will make browsing more “fun” and “ergonomic”. In spite of the lack of additional details, Mozilla will surely have to use Apple’s WebKit engine to release Junior as a browser app on the App Store, putting it on the same technical level of other third-party browsers like iCab and Maven.

The demo given by the Mozilla design team shows a functioning web browser with full-screen mode, visual tabs and bookmarks, and large touch-based controls sitting at both sides of the screen to access new pages and standard browser controls like Back and Refresh. Looking at this first demo, it appears Junior will be somewhat inspired by apps like Grazing, which has long experiment with “thumb controls” to facilitate the process of interacting with the browser without losing the convenience of holding the iPad comfortably.

With Safari getting an even faster engine and iCloud tabs on iOS 6, it will become harder for developers to gain mass traction with third-party browsers. Safari is integrated with the system (iOS users can’t replace their default browsers in the Settings) and, with iOS 6, it will work with iCloud to synchronize tabs across devices. But the “big players” like Mozilla and Google have a chance to leverage their existing desktop ecosystem to build mobile companion apps that, even if not as capable as their computer counterparts, could implement features like “official” tab and bookmark sync to provide solid experiences to users accustomed to other browsers on their Macs or PCs. Google is rumored to be working on an iOS version of Chrome; Mozilla could, in theory, build Firefox Home (which is currently a separate app) straight into Junior to keep a Firefox user’s session synced and stored in the cloud.