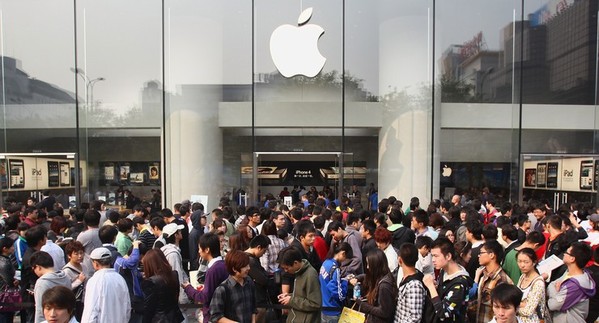 Matthew Panzarino for The Next Web:

The 37.04M iPhone figure divided out over the period of 98 days in the quarter gives us a slightly lower number at 377.9K sold every day, but it’s still higher than the world’s average birth rate which clocks in at 371K per day.

If those numbers are correct, and we believe that they are, Apple is now making iPhones at a rate that exceeds the amount of babies that humans produce on earth every day. This number is likely to be transient as the birth rate isn’t static and Apple’s first quarter normally gets a bump in sales from the Christmas shopping season which subsides in the second.

The iPhone’s sales numbers in Q1 2012 are absolutely amazing – imagine what will happen with the “redesigned” iPhone later this year when iPhone 4 customers will be looking for an upgrade.

Also: Wembley Stadium has a reported capacity of 90,000 people. To reach the 37 million units sold by Apple, each person in Wembley Stadium would have to carry 411 iPhones in his pocket. That’s how many iPhones Apple sold last quarter. [image via]