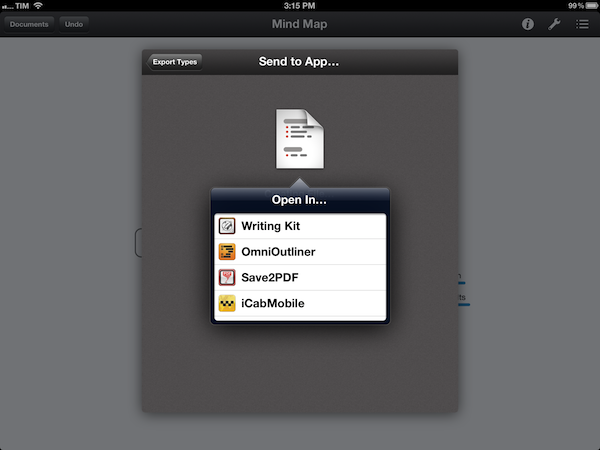 One of my favorite apps for iOS, MindNode, has been updated this morning to version 2.1. Devoid of the iCloud integration that was previously teased on the developers’ website (iCloud continues to be a problem for several developers), the new version still sports some great improvements that will dramatically increase my usage of MindNode, especially on the iPad.

With Retina-ready graphics, 200% zoom level, and a new visual style, browsing and editing mind maps in MindNode now looks better than ever. I don’t rely on MindNode for the attractiveness of its graphics though, which is why I am welcoming the possibility of sending documents to other iOS apps installed on a device. Similar to the sharing menu The Omni Group has been using for quite some time in OmniOutliner for iPad, the new MindNode lets you export maps as FreeMind, PNG, text, OPML, or PDF documents. Automatically recognizing third-party iOS apps capable of receiving such files through the “Open in…” menu, MindNode 2.1 allows me to pass along maps as OPML files to CarbonFin’s Outliner or iThoughts HD, or send them as simple text files to my preferred text editor. Because MindNode can also open documents from any Dropbox folder, outlines I had already created in Outliner can easily be “visualized” and edited in MindNode. iOS could use a better way to let apps access the same version of a file, but with a plethora of importing and exporting options MindNode 2.1 provides a decent solution for now.

MindNode 2.1 comes with other bug fixes, and it retains the same simple-yet-powerful text entry and manipulation workflow of the previous versions. MindNode for iOS is $9.99 on the App Store.