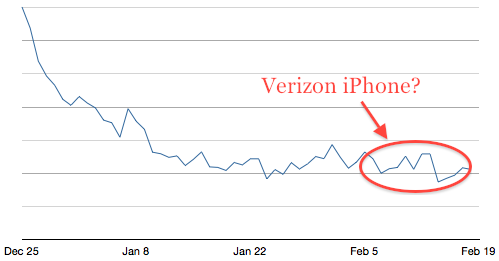 Marco Arment makes the case for non-record initial Verizon iPhone sales due to the fact that the device is mostly selling to existing iPhone owners coming from AT&T. Why the analysis? Because Instapaper’s numbers in the App Store haven’t gone under the usual increase of a new product release / major update / holiday season:

And my sales haven’t noticed. Ranks have held nearly constant, but so have volumes.

Assuming the correlation is approximately sound, this can be explained by three possibilities:

Assuming the analysis is correct, I guess we’ll see a lot of Verizon iPhone sales when contracts are up in June. Also in June: iPhone 5, quite possibly available on Verizon as well. This summer is going to be interesting for U.S. carriers.