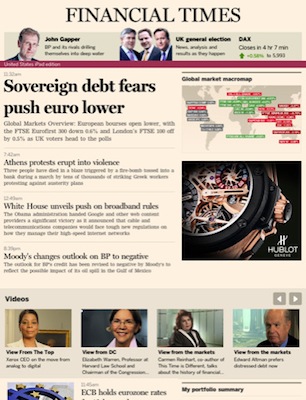 The official Financial Times app for iPad keeps generating interesting numbers: downloads have reached 600,000 copies up from 430,000 in November, and the app is driving 20% of Financial Times’ subscriptions.

Ridding, who was speaking at an investor conference in New York on Thursday, said the FT’s iPad app had been downloaded 600,000 times, up from 430,000 downloads at the end of November.

Pearson PLC’s FT allows people to read a set number of articles on its website each month before asking for a fee. Newspaper and magazine publishers are turning to the iPad and other tablet devices to help revive their business, which have been beset by declining advertising revenue and readership.

It will be interesting to see whether Financial Times will update the app to support Apple’s new in-app subscription system.