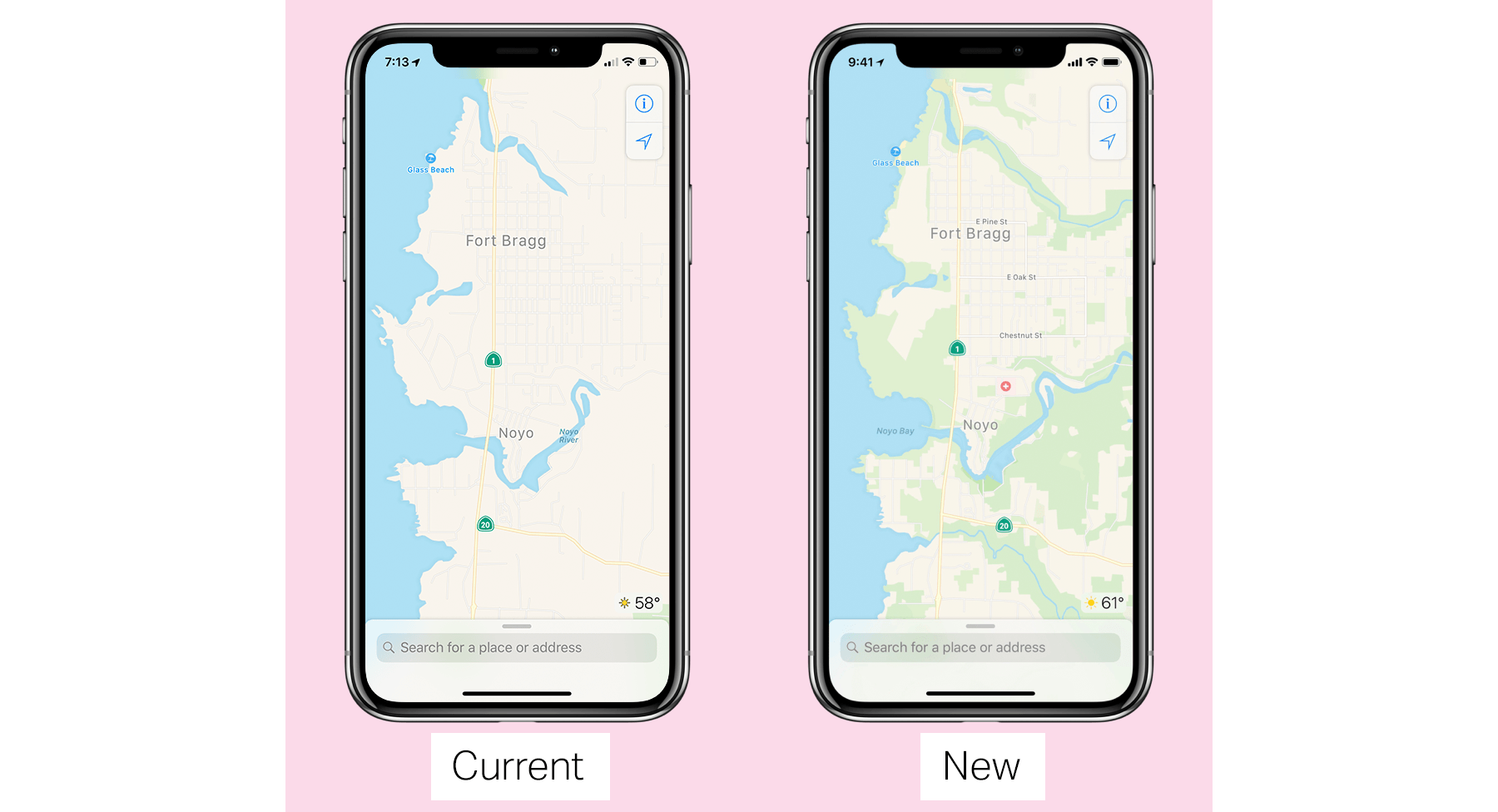 Next week, Apple will begin rolling out new map data as part of the iOS 12 beta. The company, which provided an extensive preview to Matthew Panzarino at TechCrunch, has been rebuilding its map data from the ground up, relying on its own data collection instead of third-party providers.

As a part of the preview, Panzarino interviewed Senior Vice President, Eddy Cue, Vice President Patrice Gautier, and ‘over a dozen’ members of the Apple Maps team. According to Cue, the process of rebuilding Maps began four years ago. Cue told TechCrunch that instead of relying on a patchwork of data sources from third-party vendors, Apple decided to leverage a combination of sources in its control, including the millions of iOS devices in service around the globe:

“We felt like because the shift to devices had happened — building a map today in the way that we were traditionally doing it, the way that it was being done — we could improve things significantly, and improve them in different ways,” he says. “One is more accuracy. Two is being able to update the map faster based on the data and the things that we’re seeing, as opposed to driving again or getting the information where the customer’s proactively telling us. What if we could actually see it before all of those things?”

So, Apple began collecting map data in 2015 from a combination of dedicated Apple Maps vans, high-resolution satellite imagery, and what Apple calls probe data from iOS devices, all supplemented by hundreds of human editors. Panzarino, who took a ride in one of the Apple Maps vans, describes the tech they use:

In addition to a beefed up GPS rig on the roof, four LiDAR arrays mounted at the corners and 8 cameras shooting overlapping high-resolution images – there’s also the standard physical measuring tool attached to a rear wheel that allows for precise tracking of distance and image capture. In the rear there is a surprising lack of bulky equipment. Instead, it’s a straightforward Mac Pro bolted to the floor, attached to an array of solid state drives for storage. A single USB cable routes up to the dashboard where the actual mapping capture software runs on an iPad.

He also describes the probe data as:

Essentially little slices of vector data that represent direction and speed transmitted back to Apple completely anonymized with no way to tie it to a specific user or even any given trip. It’s reaching in and sipping a tiny amount of data from millions of users instead, giving it a holistic, real-time picture without compromising user privacy.

Throughout the TechCrunch piece, Apple emphasizes that data is being collected with privacy in mind using techniques like route segmentation and data anonymization. Cue told Panzarino:

“We specifically don’t collect data, even from point A to point B,” notes Cue. “We collect data — when we do it —in an anonymous fashion, in subsections of the whole, so we couldn’t even say that there is a person that went from point A to point B. We’re collecting the segments of it. As you can imagine, that’s always been a key part of doing this. Honestly, we don’t think it buys us anything [to collect more]. We’re not losing any features or capabilities by doing this.”

The new map data is being rolled out in the US first. Apple says that data will be seamlessly integrated with existing map data beginning with the next beta release of iOS 12, which is scheduled for next week. The first region to get a refresh will be Northern California, with new areas added throughout the US over the course of about a year.

The result should be more accurate, frequently updated maps that do a better job reflecting points of interests, topography highlights, and other details that aren’t present in Apple Maps today. Judging from the screenshots in Panzarino’s article, the changes should be noticeable and useful, though the design of the app itself is not changing during the rollout of the new data.