Tech pundits, blogs and media have been discussing about a Verizon iPhone for years. Since 2007, actually, when the first iPhone came out. According to the latest rumors we heard earlier this week, though, Apple is not working on a Verizon iPhone: it’s working on a CDMA iPhone that, among others, will support Verizon.

CDMA is a technology that’s deeply used in the US, not that much in Europe (do we have any CDMA providers here, fellow Europeans?) - an awful lot in Asia. Of course a Verizon iPhone would mean another huge round of possibilities and success for Apple in the US (the Verizon iPhone is now some sort of a myth), but what about other countries? If you think about it, it would make perfect sense for Apple to release an updated version of the iPhone 4 in January (together with an iPad 2 announcement, perhaps) to work on all international CDMA carriers, and not just Verizon.

So how big is this market?

Asymco’s Horace Dediu did some research: a CDMA-enabled iPhone would increase Apple’s addressable market by 16 percent. Or, 500 million people. 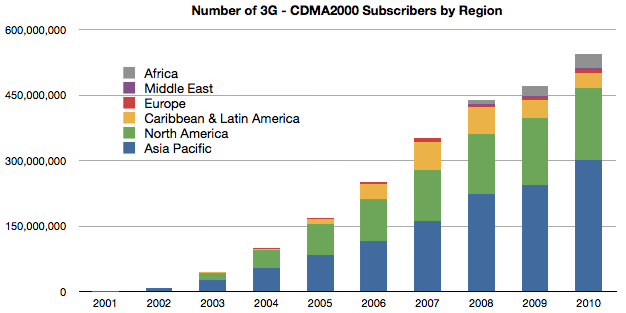 To be exact, it’s 543 million CDMA subscribers according to Dediu. That’s quite a big market. Think about it again: it makes sense for Apple to release a CDMA iPhone. I think this time we’re really months away from the truth.