I remember last year I stumbled upon a promising new service called Spotify which, though it wasn’t officially available in Italy, looked too much interesting to not give it a proper spin. So I signed up for an account, downloaded the Mac client, enjoyed the freedom of having an immense music catalogue legally available for high quality streaming. Man that was the future of music, a mix between internet radio and iTunes. I upgraded to a Premium account to avoid ads and use the iPhone app, which has been one of the best things of summer ‘09 (yeah, together with that goat we stole and put in my car, but that’s another story). I mean, the Spotify iPhone app is the thing you want to bring with you on the Lost island. It lets you listen to music under a simple 3G connection, all the music you want. Jesus, wish I had it when I was 10 (damn new boys).

Back to our business, we’re talking about internet radios. Well, there was this application for Mac OS X I never really consider until my friend Zak Soup reviewed it here on MacStories, which looked so sexy and useful - Snowtape. From the review: “Snowtape is an internet radio player for the Mac, a one-of-a-kind app that looks good as it blasts your tunes. Sporting a slick, dark, interface, Snowtape is like an iTunes for your iRadio, helping you browse through thousands of stations and even import your own.”

Fast forward 2 months. I remember there’s this music app I have to test. I install Snowtape. I love it. I read the iPhone app announcement post. I get accepted into the beta testing group. I love Snowtape even more.

Then Apple rejects Snowtape for iPhone. I’m sad, upset, I wanna talk about the app. Damn Steve Rea, you can’t reject this.

I woke up this morning with the feeling something good was about to happen. Checking out store.apple.com didn’t help, nothing was apparently new. But wait, I’ve got an email from Vemedio telling me Snowtape for iPhone is out.

Here we are folks, talking about one of the most beautiful and useful music applications for iPhone to date. Meet Snowtape for iPhone.

Snowtape for iPhone is one of the best looking apps currently available in the App Store. Being designed by Iconlicious, Marcelo and Emanuel put their seal quality on an iPhone app once again, creating a UI design that combines both native and highly custom elements and yet has a very consistent feeling throghout all the parts you’ll end up tapping on. It’s powered by a dark, stylish design, crisp icons and buttons, gorgeous previews and sliders that will make every pixel fetishist out there happy to use it. It’s a pleasure to look at and, pay attention, it’s a joy to use.

Snowtape for iPhone allows you to listen to internet radio, record songs and keep them cached on your iPhone for future usage. You can choose from a huge list of radio stations divided by genres (Alternative, Rap, Hip Hop and so on), tap on one and start streaming, directly on your iPhone. No frills, it works. The home screen (let’s just call it the Dashboard) is your central hub for radio, recordings and folders. You can create as many folders as you want and move songs if you want to organize them in a better way. Tapping on the radio tab for the first time opens a blank screen with a pretty self explanatory Start button; I guess you might want to tap on it, and start listening to music. But first, you have to choose a genre and a radio station to tune it. Once you’ve done that,  the radio station will start buffering and streaming the content right on your iPhone. 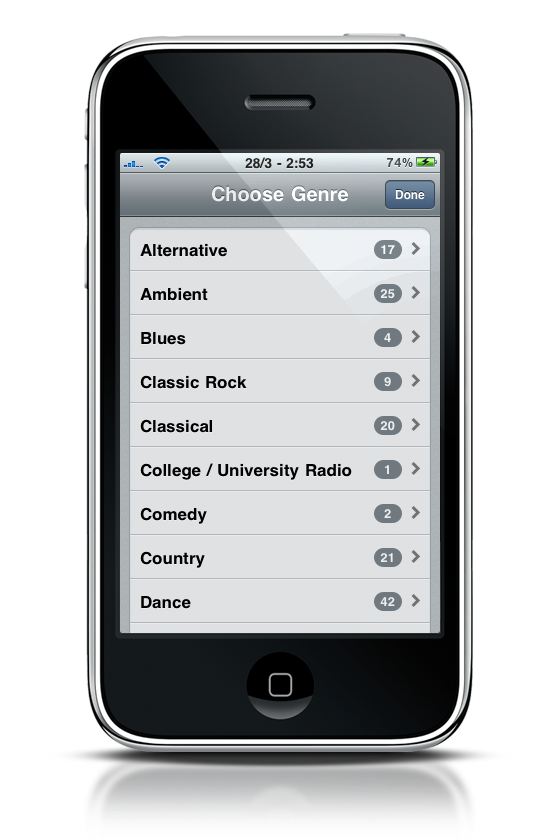 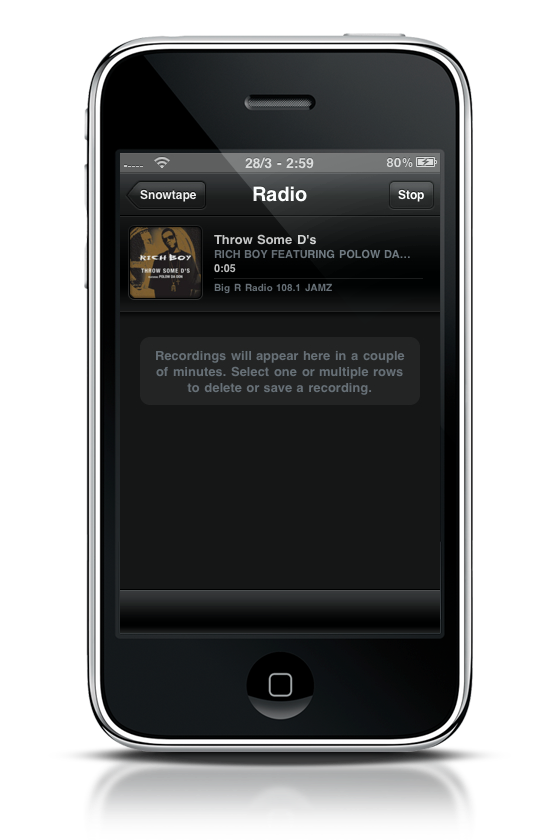 The biggest difference from the Mac version of Snowtape is that you don’t have to manually record each song: as you start listening to music Snowtape will record every song that passes on in the background. Tapping on the stop button ends the playback and recording. As you keep listening to songs, Snowtape will display  the ones it has successfully recorded in the bottom part of the window. To save the recordings you have to manually select them and tap on the Save button; you can now retrieve them into the Recordings section in the dashboard.

From the Recordings section you can do a lot of interesting things: play songs, move them to another folder, edit them and purchase the iTunes version. To do so, you have to tap on a song and tap again on the icons that will appear on screen, pretty much like the ever-popular Tweetie’s swipe menu. If you tap play, a gorgeous bar pops up over the bottom bar, together with some music controls: it’s awesome. Wanna edit the songs? Hell yeah you can. Snowtape lets you enter a new title, artist, album, year and genre, together with the possibility to manually edit the track by moving a slider in the track’s graphs below. A stunning implementation. 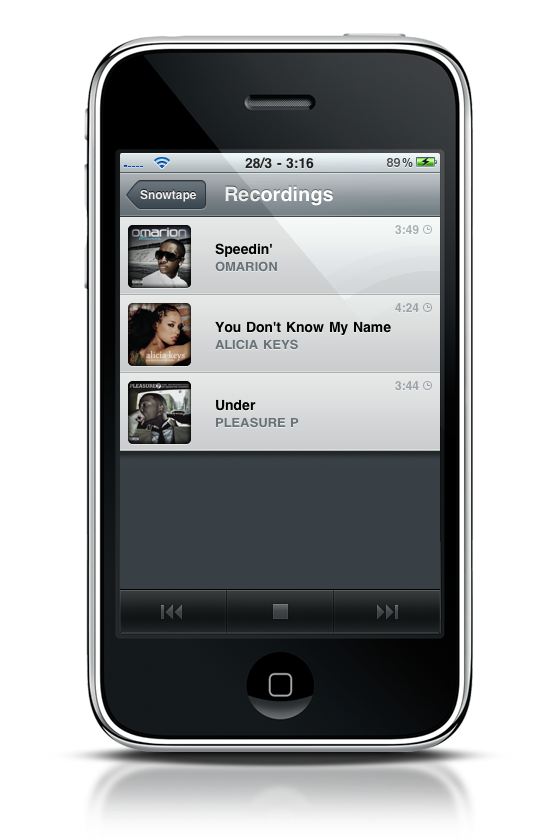 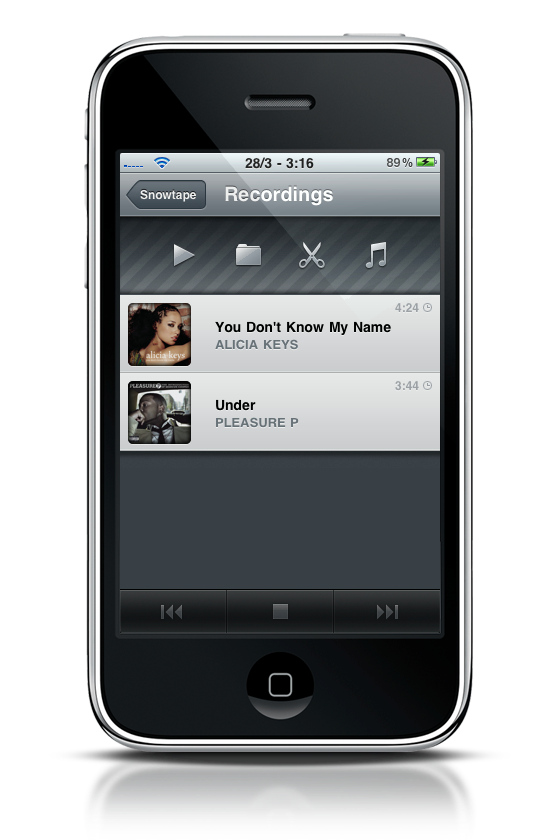 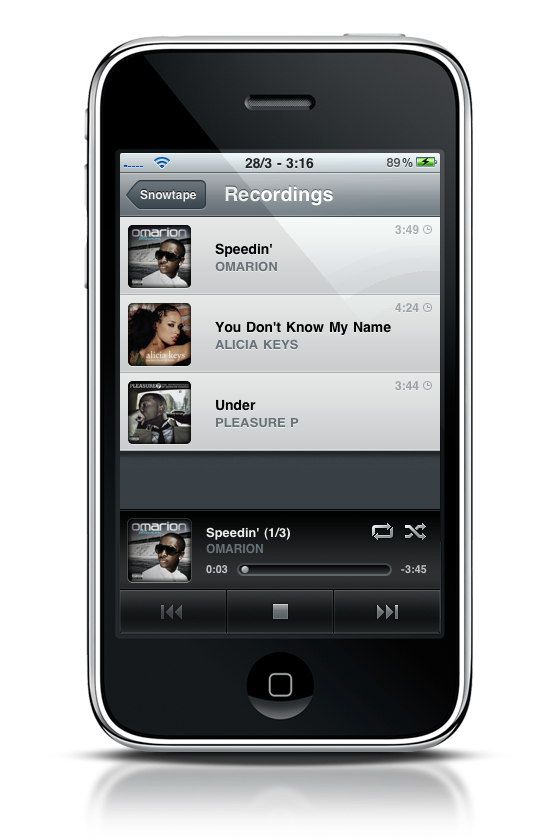 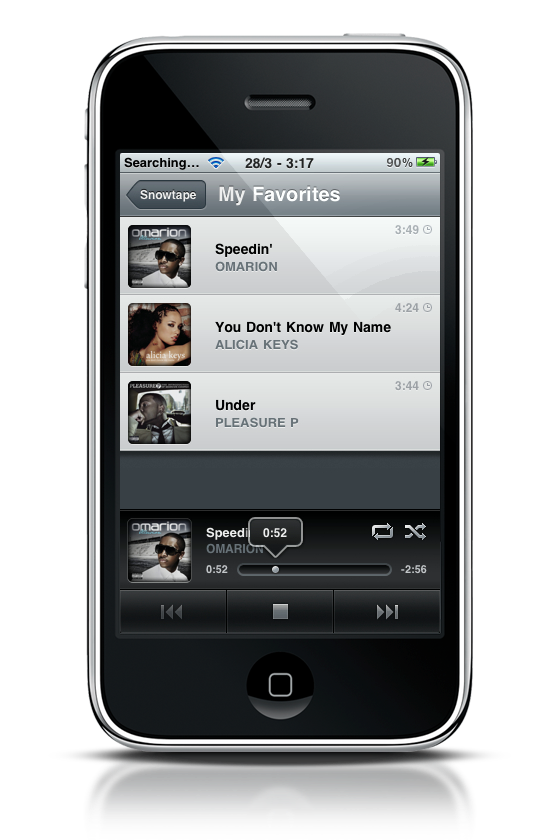 All in all, Snowtape for iPhone is the music application you have to purchase right now from the App Store. If you fancy the idea of listening to hundreds of different music stations from your device, packed in a wonderful interface and powered by tons of cool features, then you know these will be 2 well spent bucks. But why don’t just enter our giveaway and get the chance to win one of the 2 promo codes we have? Just follow the rules below, and good luck!

To enter this giveaway you have to:

Winners will be announced on Tuesday, March 30th.