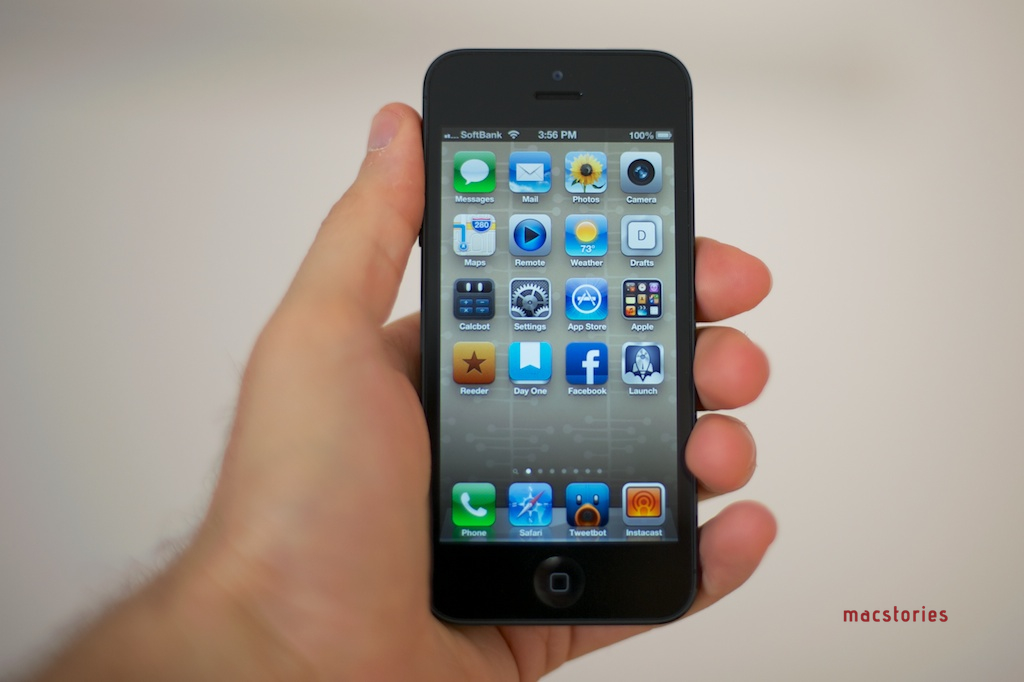 When you first pick up the iPhone 5, your hand immediately contours to the same grip it’s become accustomed to with your previous iPhone. This is no small achievement. Despite how much thinner, lighter, and taller the 5 is than any previous iPhone, it still feels unmistakably like an iPhone; simultaneously something brand new and, by this point, instinctually familiar. 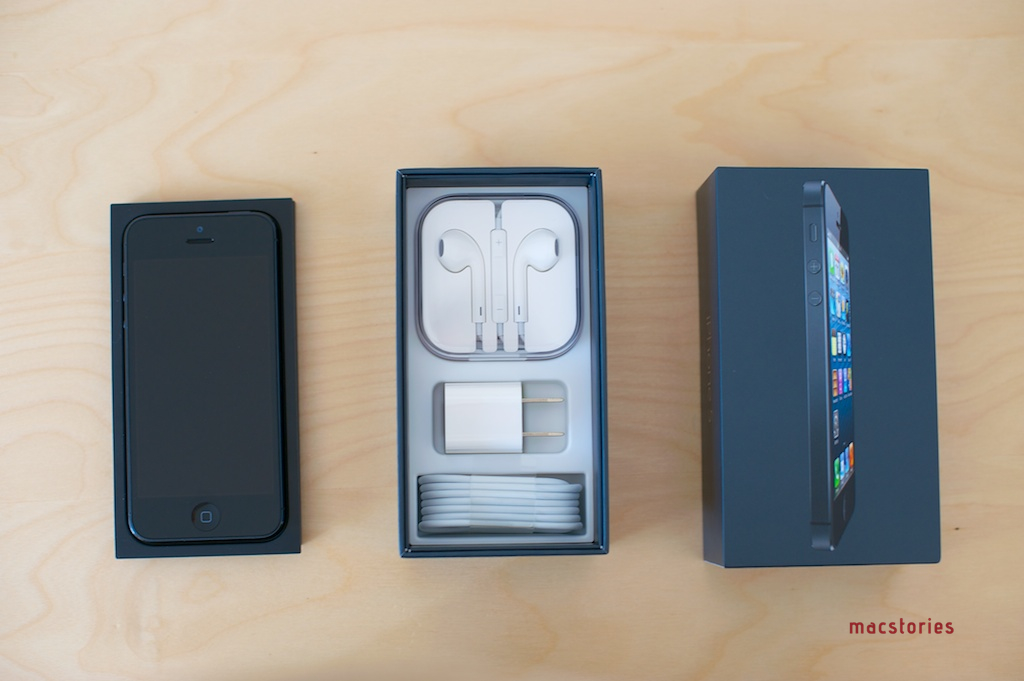 The new iPhone’s weight and size make it feel almost like a plastic mock-up, but the smooth metal back imparts a feeling of solidity and craftsmanship that ensures you will never mistake it as such. The metal band surrounding the black model truly does add to the monolithic feel, which is itself at odds with the phone’s incredibly svelte form. 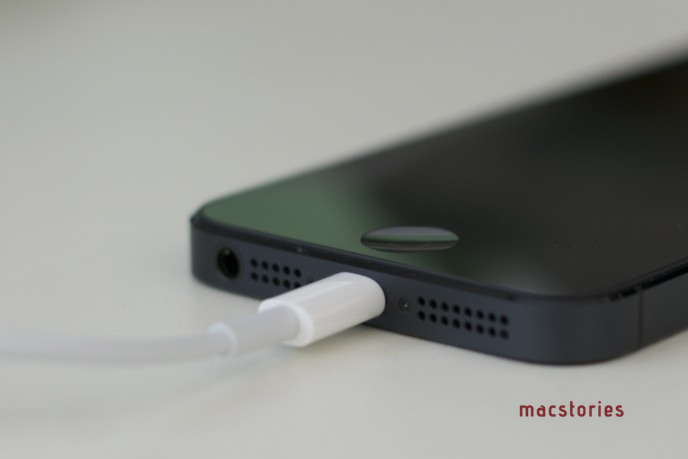 After years of the 30-pin adaptor, Lightning feels impossibly tiny. Any pictures you may have seen make it look much bigger than it actually is; it almost feels like it could disappear between your fingers if it weren’t connected to the cable. It may not be faster than USB 2.0, and for anyone with a lot of 30-pin accessories there’s no denying that it won’t be fun to pay for adaptors to make them usable, but one would be hard pressed to argue that Lightning isn’t a major improvement over its predecessor.

As reported by others, the Home button is much more clicky than any previous iPhone (except maybe the original, which I never used as it was never available in Japan) and requires considerably more force to depress.

It is both strange and familiar to first see the familiar home screen with five rows of icons instead of four. Once you start using the phone though, the new larger screen immediately starts to feel natural — though it did take me a little getting used to reaching higher for the two upper corners. While 176 vertical pixels may not sound like a lot, it really does result in a more expansive-feeling view in apps that are optimized to take advantage of them — especially when using the keyboard. For those of you wondering if it’s still possible to control your iPhone one-thumbed, rest assured that it definitely is, though you may need to adjust your hand’s position here and there as you get used to the new dimensions. 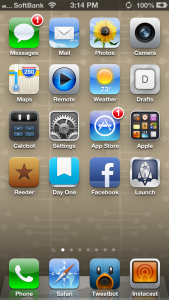 In normal use so far I’ve found that my hand rarely notices the glass partitions in the back. Most of the time it comfortably rests on the new metal body; at least the way I hold it.

Before using the 5 I had to restore it from backup (I chose to go with iTunes because it’s faster). While my 4S always got hot when charging or syncing, the 5 only barely warmed up to a perceptible level throughout the entire process.

Before the restore completed I wondered how my old app order would be arranged with the addition of a fifth row. The answer: all apps and folders are left in their original places, and the fifth row is left empty until you decide to fill it.

Wallpaper that was made for the 4 and 4S displays is stretched to fill the 5’s dimensions. Depending on the wallpaper you currently use this will be imperceptible or jarring. Personally, I elected to use one of the stock iOS wallpapers until I find a new one designed for 640x1136.

Apps that have not yet been updated for the 5’s display feel comparatively tiny and compressed, and the surprisingly wide letterbox bars give you a good indication of just how much screen that extra half-inch adds up to. The difference between the bars and the surrounding glass is definitely noticeable, and doesn’t make for as clean an experience as it may have appeared in the keynote demo. While the need to an update an app for 16:9 isn’t as pressing as the need to update for Retina when the iPhone 4 was released, it’s still glaring enough that serious developers will want to do so as soon as possible.[1] One advantage of sorts that letterboxed apps do have is that notification banners slide in above the app, not on top of it.

Interestingly enough, web apps that open in their own instance rather than Safari also have to be updated to take advantage of the new display. If they’re not, they continue to show up as letterboxed too.

The “tabs” you flip through in Safari have been updated to properly reflect the 5’s new screen ratio, as have the cards in the new App Store search and the artwork in Notification settings. 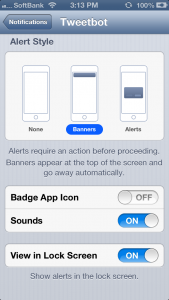 As expected, videos and landscape photos are a pleasure to view on the wider screen. As anyone who remembers the upgrade from 4:3 to widescreen TVs can tell you, the absence of letterboxing makes for a considerably more immersive experience. And while the color improvements in the 5’s screen may not be immediately apparent, when placed next to an older iPhone model the difference is clear.

LTE is available in my area (which is good, as SoftBank requires that you upgrade to an LTE plan to get an iPhone 5) but at least in our apartment it doesn’t compare to Wi-Fi. The good news is that Wi-Fi (on a 5GHz 802.11n network) is remarkably faster: almost twice my previous speed record, according to speedtest.net. The difference is noticeable in real-world use too: images uploaded with the iPhone 5 transfer much quicker than they did with a 4S on the same network, whether it be through Twitter, iMessage, or Photostream. 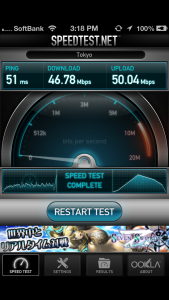 Speaking of speed: while I can’t verify Apple’s claims of the 5 being twice as fast as the 4S, I can verify that it is faster at just about everything. While it doesn’t feel like as much of a leap as going from the 3G to the 3GS did — probably because the 4S was already pretty fast — it is still a marked and welcome improvement, especially for anyone who hates waiting for their technology to keep up with them.

The new EarPods (a name which I’m personally none too fond of) don’t seem to stay in my ears any more securely than the old earbuds did — almost to the point where I wonder if I’m not putting them in correctly. Still, they do stay in well enough, they sound fine to my non-audiophile ears, they feel more solid and less cheap than their predecessors, and the new button controls are much bigger and easier to press. 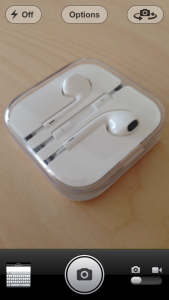 Not only is the Camera 40% faster (at least according to Apple), the layout has been changed to show a bigger shutter button.

Whatever you may think about Apple’s new Maps, the app itself is blazingly fast on the iPhone 5. This was one instance where I very much noticed the difference in performance between the 4S and the 5.

The Weather app has changed its layout to better fit the new screen as well. Before, you had to touch the forecast to see an upcoming hourly breakdown; now, it’s there all the time, and you swipe left and right instead of up and down to scan through it. 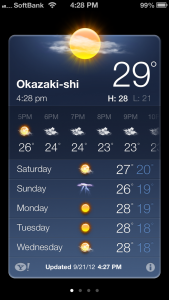 I haven’t even had the 5 a full twelve hours yet, so I can’t report on battery life or give it a full review. What I can say is that my initial impressions are highly positive. Everything you’ve heard about how the phone feels in your hand is true. The weight, thinness, and sheer build quality add up to a device that feels almost unreal to hold and use. When you include LTE support (which at least in some places can reach amazing speeds), the improvements in performance, the larger screen (which effectively serves to give the iPhone a more spacious feel without being cumbersome), all with (supposedly) equal or greater battery life to its predecessor, I can only describe it as “truly impressive”. Those of you who are lucky enough to be getting one: you’re in for a treat.

If you have any more questions about the 5, tweet us at @macstoriesnet and we’ll do our best to answer them.

How do the new speakers sound?
I mainly just listen to podcasts and am really untrained to evaluate audio quality, but to my ears they sound about the same as they did on the 4S. It’s possible they’re a bit smoother with less distortion, but I really can’t say for sure.