if you’ve been reading my tweets lately, you should know that I’ve moved back to using Realmac’s LittleSnapper as my image library organizer application. I’ve also written a huge review about it, be sure to read it if you missed it. To sum up, I basically needed an app that could help me in a) collecting my whole image library, made of desktop screenshots, website snapshots and apps screengrabs, and b) sharing it across multiple social networks. LittleSnapper supports Ember app and Flickr, but I initially decided to use Ember as my social website of choice: I purchased a Pro account, started uploading stuff, gained a bunch of followers - I’m totally happy with it. Still I was missing something. Ember is no doubt one of the websites I visit more during the day, but it’s not a great place for photographers. As I wrote in my LS review “Ember was built with Mac and iPhone users in mind”, meaning that you’ll find tons of Apple related stuff there. I mean, take a look at my profile: it pretty much sums up the whole essence of Ember. And if you consider that Ember is developed by Realmac Software, that’s perfectly reasonable.

Now, I’m not a photographer, but I’m quite into discovering beautiful shots and adding them to my favorites. Also, I sometimes take random pics with my iPhone and edit them with that amazing app called TiltShift Generator (you should check it out, seriously). So I thought, what’s better than Flickr for that? There’s nothing better than Flickr when it comes to having a large community of passionate photographers that share their shots. I made the decision in 3 days: I deleted my old account, opened a new one with a nice vanity url, uploaded my whole Ember collection (just to be sure people who don’t use Ember could enjoy it as well), started following some people I know, purchased a Pro account. I don’t want limitations of any sort for the stuff I like. Then, I realized the one thing missing from this almost bullet proof setup was an iPhone app. But I already knew which app was the best one around.

It’s called Flickit Pro, and it’s gonna make you enjoy using Flickr from your iPhone once more. With feeling.

Ok, Placebo quotes aside, it’s not that the iPhone lacks good Flickr clients. Actually, the official Flickr application itself it’s pretty good and feature rich. And it’s free. But come on, we’re indie guys - we just can’t like official stuff. Hell I never liked official stuff in my whole life.  So, I heard that the much popular Flickit was updated to the 2.0 version and that the developer released a Pro version as well, which was a complete different thing from the free app that only lets you upload photos to your Flickr account. Flickit Pro is a full featured Flickr client which shows many interesting and well developed ideas the Yahoo team didn’t think of - or just didn’t want to implement in their client.

Flickit Pro is designed and developed by Mike Bernardo, an independent developer who “spent several years with startups riding the ups and downs of the Web technology rollercoaster” and then founded Green Volcano Software in 2007. He released the first version of Flickit back in February 2009 and it immediately achieved a huge success: Flickit allowed yout to easily upload a batch of photos from your iPhone’s camera roll directly to Flickr in a few, easy steps. I can’t tell how many times I had been using the app before I stopped using Flickr, but they sure were a lot. Flickit spotted a slick and minimal black user interface, and maybe that’s the reason many people were / are still using it, together with its ease to use. Flickit wasn’t a real Flickr client though: it was just an app to upload stuff and that’s it. With this Pro release the developer rebuilt things from the ground up, and by things I mean features, interface and Flickr engine. It’s basically a new app. Let’s see how it works.

Upon first launch you’ll be presented a screen which requires you to authorize the application with Flickr: much like any other Flickr app out there, Flickit can do almost everything except deleting stuff, which is a thing I’ve never understood. I’ve heard the dev has found a way to implement it in the next updates though. We’ll see. Anyway, once you’ve authorized the application to play with your data (as you don’t want to) you’ll be ready to use it, but first you should set up some stuff to get started. Flickit Pro is divided in 5 sections: People, Recents, Explore, Upload and Settings. 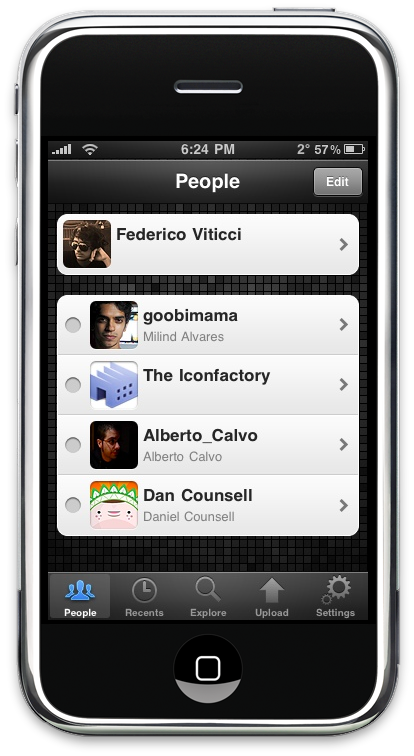 People is the first tab, and that’s where you should customize a few things: from here you can add as many friends you want from your whole list of contacts - to keep a special eye on them. Indeed, one of the things I don’t like about Flickr’s web interface is that when you log in you’re presented a list with every update from every contact you have. I usually add too many people on Flickr and most of the times and I’m not interested in everything they upload. On the other hand, I have a few contacts I always enjoy browsing the profile, so it would be great to have a separate section for them. Fortunately Flickit Pro enables you to add “favorite people”, or contacts you want to keep under strict control. Just tap edit, choose Add Contact and you can pick up as many people as you want from a simple contact list. Next time they’ll upload something a nice blue orb will notify you that they’ve been active and there’s new stuff to check out. Whether is still questionable if having @goobimama’s face straight into my homescreen is actually a good thing, this is a no doubt a great feature. It helps in keeping track of the contacts you really care about, and the execution is very well developed. 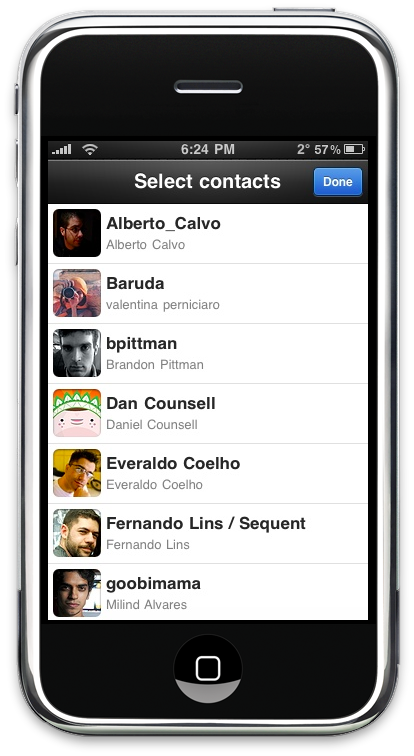 By tapping on a contact’s pic (or yours, doesn’t change anything) you’ll be prompted another screen which is the actual contact page. There are 4 buttons in the top toolbar which allow you to view all the pictures from that user, his photosets, tags and favorites. Awesome. Also, you can hide the toolbar if you want more view space. 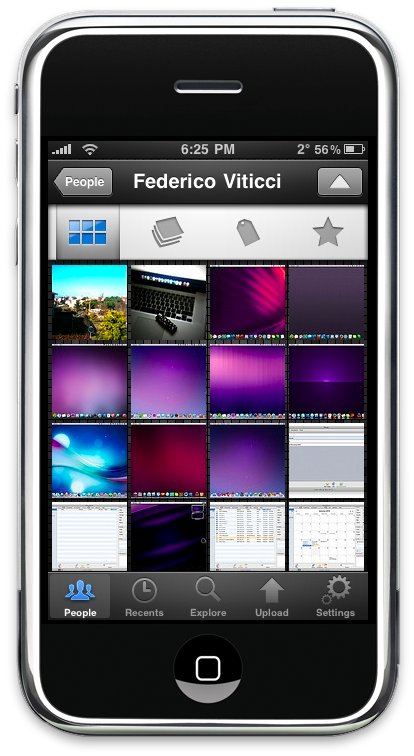 Photos are presented as thumbnails laying upon a gorgeous black & gray squares background, an UI element that Flickit shares across all its parts. Tapping on a thumbnail brings up another screen which contains the photo and three different view methods: Photoflow, single photo and the last one I’ll call “info view” from now on. As for the Photoflow, it’s a stunning implementation and evolution of the classic Coverflow view: instead of having a horizontal flow of pictures, Mike decided to display the whole thing pretty much as Time Machine displays backups on Mac OS X. And trust me, it’s brilliant. Probably one of the coolest things I’ve seen recently. You can either scroll the flow with your finger or tap the arrows in the bottom toolbar; also, you can activate a tilt mode which will use the iPhone’s accelerometer to scroll the photos. I don’t like it, but I’m sure many of you will. Double tapping on a picture in the Photoflow doesn’t open it at full screen or whatever (I hope the dev will fix this in the future), but you can favorite, email or open in Safari with the forward button in the bottom left corner. 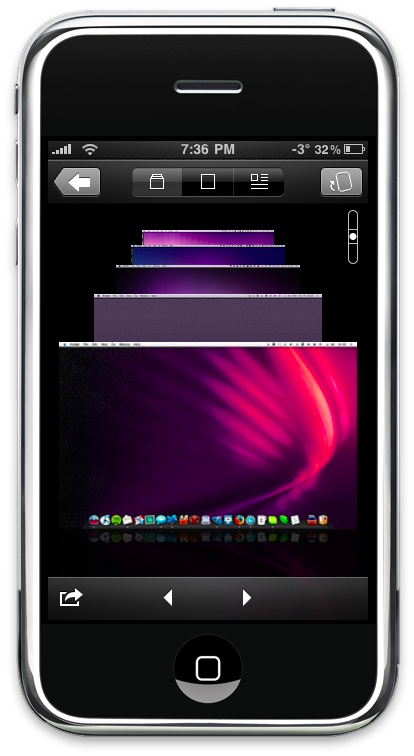 While the single photo view is very simple and doesn’t do anything more than displaying a small (yet zoomable) preview of the picture, the info view is definitely noteworthy and it’s one of the features I’m using more in the app. You can view a thumbnail of the picture, together with total views, upload date, tags and comments. You can also add a new comment yourself. There are two major gripes I have anyway: you can’t tap on tags and usernames. I seriously wish Mike will add the possibility of opening profiles and tags from anywhere in the application someday. Tapping on the preview in the info view opens the single picture. Obviously, everything works the same whether you’re in the profile tab or in the photosets. 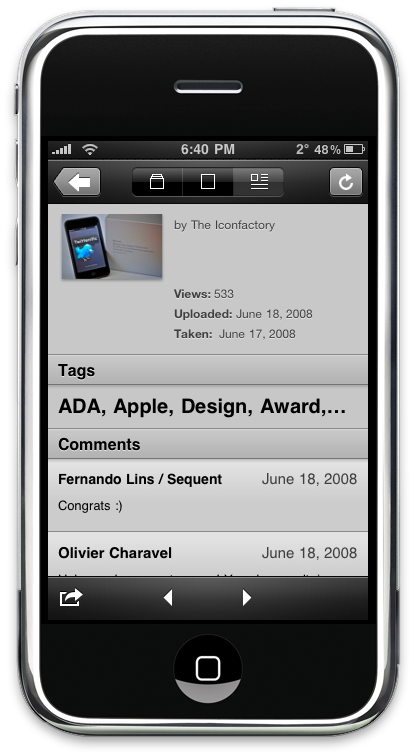 Moving on to the second section of the app, Recents, I can’t really sat that much: it should display the recent activity in the last 7 days (like comments) but as I’ve just opened my new account I’ve got nothing to display here.

What I want to focus on is the Explore tab: it lets you search Flickr, browse the “Flickr Interestingness”, search for geottaged photos near you and manage your groups. I really like the interestingness thing (did I tell you Flickit Pro supports infinite scrolling?) and Groups, also because the app lets you upload stuff to a group you’re subscribed to directly from the upload interface. When you’re about to upload a picture you can tap on the preview to enter many additional details like Title, Description, Sets, Tags, Groups, Visibility and Geolocation. You can send a photo to you twitter or blog as well. Well done, Mike. 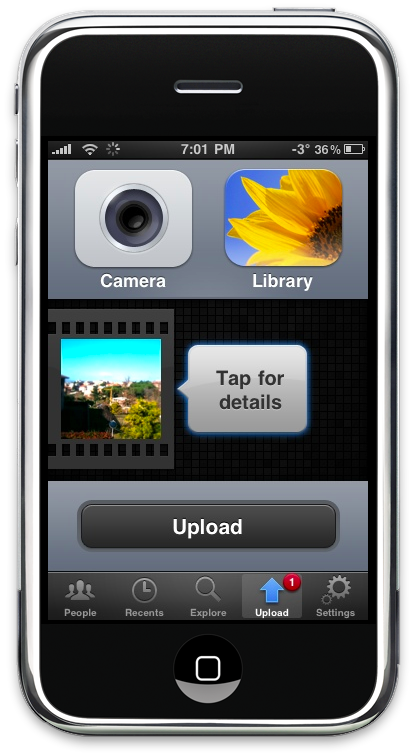 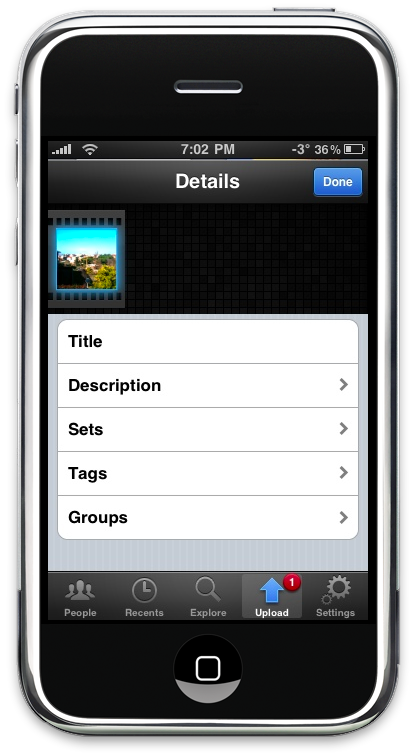 I’m very impressed by Flickit Pro. It’s a beautiful application that shows an amazing attention to the user interface, packed with tons of features and possibilities. It beats all the competitors hands down, becoming the new, best application to manage your Flickr account from your iPhone. If you spend a lot of time on Flickr and you have an iPhone, Flickit Pro is a must have. Period.

Mike gave me 2 Flickit Pro promo codes to give away to MacStories readers.

I’ll pick up the winners on Tuesday, January 26th.