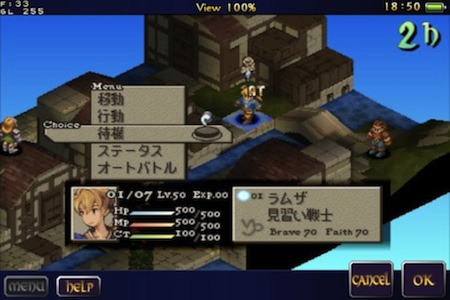 For all those of you who were hoping to get your hands on a mobile version of Final Fantasy Tactics: The War of Lions (announced in June) before Christmas – I’m sorry, folks. The game’s not coming this year, as reported by TouchArcade. It will be released, according to a note appeared on Square Enix official Facebook page, in Spring 2011.

The iPhone version of FFT was first unveiled at this year’s E3 and scheduled for a September 15th release. Square Enix then claimed they never thought to release the game in September, and told the press FFT was still “TBD”. Various delays aside, it looks like SE has been busy improving the new game menu graphics, designing new controls specifically for the iPhone.  The new screenshots look better than the old ones, and here’s to hoping that Square Enix is taking the extra time to make the entire game better, perhaps with new features, quests and enemies. An additional storyline for iPhone users would be great, for instance.

Still, these delays with brief press releases always make me worry. Because you know what else is coming in Spring 2011? The white iPhone 4.