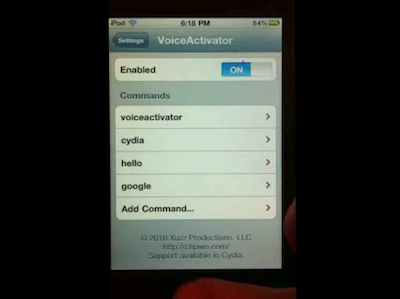 Voice Control on the iPhone and iPod touch, in spite of the number of commands it supports, is far from “full-featured”. Sure you can ask the iPhone to play and pause music, even call people – but you can’t do more. A new tweak by developer chpwn, soon to be released in Cydia, will give more power to Voice Control by letting it open apps, launch URLs and perform any Activator action, like take a screenshot.

VoiceActivator will have a dedicated settings panel where you’ll be able to create the voice shortcuts you want, and have them recognized by iOS’ built-in support for voice command. So say you want to open MacStories in a new Safari page, assign “macstories” to a new action in VoiceActivator, speak it and Safari will launch. Just like that. Kind of fancy to show off to your friends, although I’m not really huge on the whole VoiceControl UI. Still, the possibilities VoiceActivator will open seem pretty neat.

The tweak will be released soon in Cydia. Demo video below.