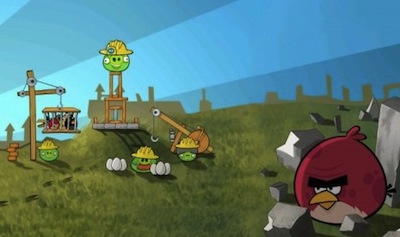 At the Virtual Goods Summit in London Rovio CEO Peter Vesterbacka had a lot to say about the future of the Angry Birds franchise. The game, as you may have noticed, had an enormous success on the iPhone, expanded to the iPad with Angry Birds HD and tripled its dominance in the App Store with a Halloween themed version three weeks ago.

A multiplayer player version of the original Angry Birds is coming, and it “will be like old school Worms games”. Vesterbacka also added: “multiplayer is a priority, but we have not determined the best way for our players to experience it yet.” As this wasn’t, the game will soon make its way to PS3, Xbox 360 and Nintendo’s Wii. A TV show and a Facebook game set in the same universe are also in the works.

But what most Angry Birds fans want to know is the development status of the sequel, that “Angry Birds 2” all my friends who regularly grab my iPad to play the original game are waiting for. Well, it seems like they’ll have to wait for “Angry Pigs”, rather than a new Angry Birds. Rovio CEO said:

We want to surprise people. No one has told the story from the pigs point of view.

Which is really interesting. Does this mean the game will turn into some kind of mobile strategy game where you control the pigs, and they have to avoid the flying birds?

We don’t know yet, but I suggest you get your slingshots ready.