We knew that the NYTimes’ Editor’s Choice app for iPad was only an interesting experiment released for the iPad, we didn’t know the official, full-content NYTimes iPad would be released this week. Surprisingly enough, last night the NYTimes pulled Editor’s Choice (which has been downloaded more than 650,000 times) and released after a few hours a free version of “NYTimes for iPad”, available in the App Store here. 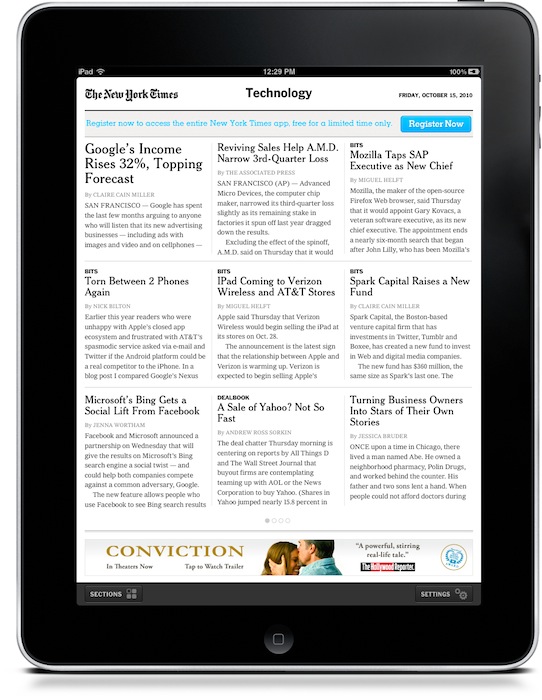 The app will be free until early-2011, when the NYTimes will introduce a “paywall” on its site. As of right now, the iPad app lets you browse all the different sections (like Business, Technology, Science, etc) but it displays a banner letting you know that a registration is required to get unlimited access. If you choose to register using the NYTimes app, a web view will be opened. We know Apple doesn’t let developers and publishers integrate subscriptions models in their applications, but a simple login on a website (tied to a subscription) is just fine. The NYTimes editors also reassure readers that once the paywall goes up, sharing features in the app won’t be compromised: if a registered up share a paywall-only link, other users that’ll click that link will be able to read content a few times before the paywall is triggered.

The app is elegant and enjoyable, but one could argue whether column layouts and small fonts are the way to go on the iPad. Also, it’s very buggy on iOS 4.2 - guess an update will be released before the public release of the new OS in November. Personally, I don’t like the fact that sections are not accessible when reading a single article - you can open the popover only from a main section page.

As the iPad goes, so does iPhone: The iPhone, too, will likely be covered by a similar type of subscription model as the iPad when the website paywall comes. That means total free access will soon be coming to an end for the iPhone as well. “When we go to the pay model, there will always be something you can access without having a paid subscription,” Namini said. “Whether it will be the free four sections you get without registering or something different, that’s to be determined later. But to access everything in full, a paid subscription will be required.

You can go download the NYTime for iPad for free here. 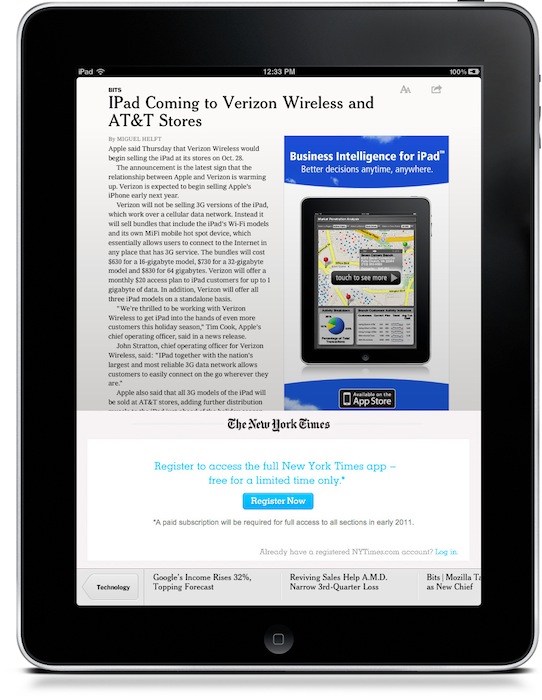