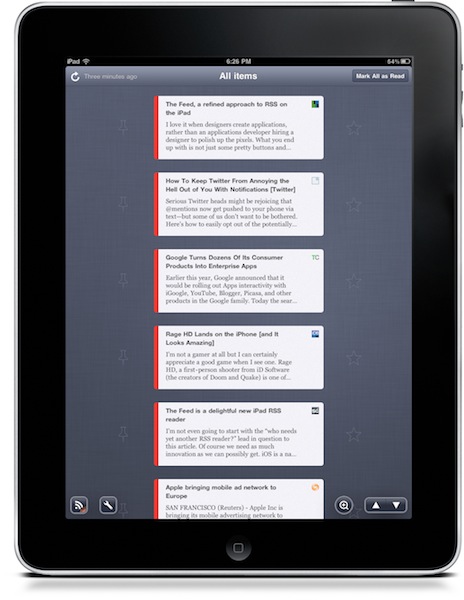 At this point, I guess you know I’m a huge Reeder fan. I use the app on my iPad on a daily basis, I fire up the iPhone version when I’m on the go and I was lucky enough to be accepted into the private Reeder for Mac alpha. Reeder has become my RSS app of choice, and I haven’t been able to switch to any other alternative since I tried the iPhone client last year. Yes, it’s that good. But that doesn’t mean I haven’t tried companion apps to Reeder.

Reeder is meant for RSS power consumption. Being based on folders and feeds navigation, Reeder isn’t meant for those people who want to sit down, pull out the iPad and start reading immediately. You have to do something to find your way through the feeds waiting for you in Google Reader. And that’s ok for me: Reeder is great Google Reader client. But what if we had the chance to have an Instapaper for Google Reader? An app that allows you to lean back, and just read? No folders, no menus, no navigation - just a flow of articles and text. 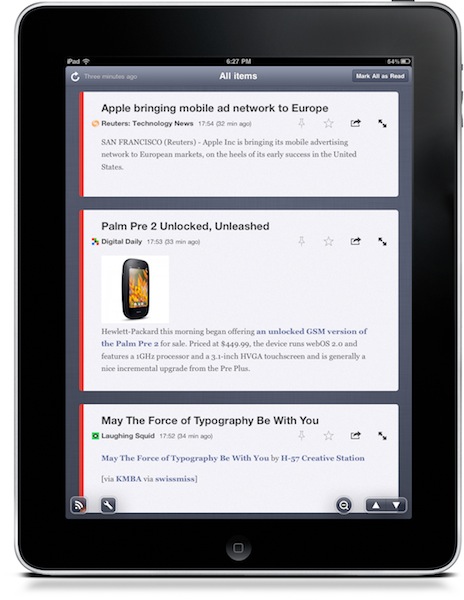 Up until now, River of News for iPad has been “the app to install” for all those looking for a way to access Google Reader in a streamlined text view, where the only requirement for the user was to scroll. River of News presents articles as a flow of stacks you can scroll until you reach the bottom. There are no “pages”, the app preloads content so you only have to scroll until you’ve found something to read. When you’re done scrolling, the app can automatically mark the articles as read.

The Feed for iPad, released last night in the App Store, offers a similar approach to River of News, comes with a nice user interface design and most of all, it’s available for free.

The Feed is based on clever navigation methods. Actually, it’s based on the simplest navigation method a developer could ever imagine, with the option to access a sub-menu with your Google Reader sources. Basically, you just scroll. Once you log in with your Google credentials, the app will fetch your latest articles (not sure it fetches unread articles, to me it looks like it simply loads the latest items from your account) and displays them as stacks in a vertical view. As you can guess, it makes more sense to use this app in portrait mode, as landscape doesn’t change anything and it’s just a waste of space. Portrait mode feels more solid and compact. Once you have these stacks loaded, you scroll. You scroll until you reach the bottom. No narrow lists, no folders and sub-folders – just a “Mark as read” button and two arrows to move forward in the flow if you don’t feel like scrolling. The Feed is direct.

Don’t be fooled by the nice UI and the simple approach, The Feed comes with a unique feature I’ve already fallen in love with – it’s genius. You can zoom out the list of articles to get a broader view of all your items in the inbox. Just take a look at the screenshots in this post to see what I mean. It’s incredibly useful because with a simple and natural gesture I can just pinch out and see multiple articles at once. Plus, the animation is cool – even though there are some bugs here and there I hope the developers will fix in the next updates. When you’re in zoomed out view you only see excerpts and button to star or pin an articles, zoom in and you’ll get the full text (when possible) with two additional buttons to share and open the web view. As for the web view, it would great if the app pre-loaded content pretty much like Flipboard does. 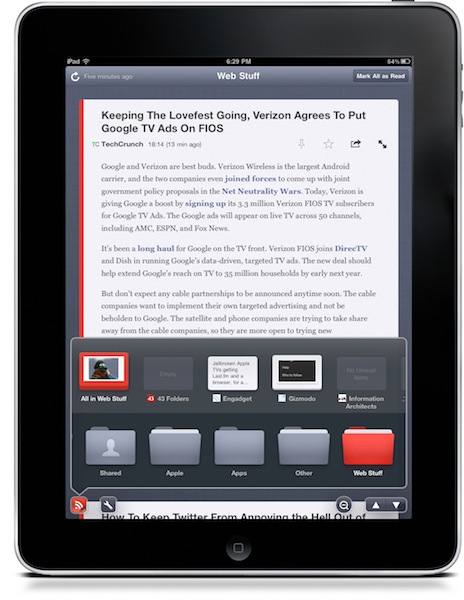 As I mentioned above, The Feed provides a way to access your Google Reader folders and starred items. By tapping on a feed icon at the bottom, you’ll get a translucent popover containing your folders. Tap on a folder, and the popover will expand to reveal the sources inside it. Tap on a source, and you’ll get a dedicated list in the main view. It works really great.

Most of all, The Feed is a beautiful app to look at. Designed  by Max Rudberg (best known for his jailbreak works), make sure to read his explanation of the app here.

The Feed is a very good RSS app to lean back and read what’s in Google Reader. It’s elegant, simple and does one thing very well. It’s not perfect, some bugs needs to be squashed, but it’s one hell of a first version.

Highly recommended, check it out.