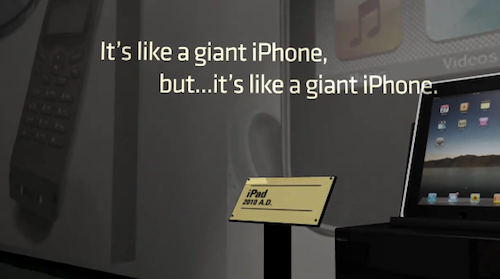 Look, I’m excited for the Android 3.0 “Honeycomb” update that will likely be teased by some tablet makers at CES 2011, but I just can’t get Motorola’s advertising campaigns.

In their latest teaser video of a tablet that they’ll unveil at CES 2011 (which we assume is the same Android chief Andy Rubin demoed at Dive Into Mobile) Motorola focuses on the “tablet evolution” by listing several tablets from the past (such as the Rosetta Stone, or Egyptian’s hieroglyphs) and making fun of their “features”. The Rosetta Stone, for instance, is labelled as “low-resolution”.

Motorola, though, also took the time to include the iPad and Samsung Galaxy Tab in the teaser video. And guess what, the iPad is called a “giant iPhone”.

We look forward to seeing Motorola unveiling their Android tablet at CES. [via Engadget]