Since I saw the first real photos of the iPad and its gorgeous screen, I wondered how many developers would start developing VNC clients for it. I mean, back then it was pretty clear that the iPad’s screen was perfect to access your computer remotely, and it’s more than clear now that we’ve tested a bunch of applications to do so.

I’ve downloaded and tested many VNC clients for the iPhone and the iPad, and I think that many of them show good ideas and possibilities, but most of them fail in the most important aspect: providing a stress free and easy way to just show your computer’s screen on a mobile device, and interact with it. They overwhelm the user with tons of useless features but, fortunately, iTeleport is nothing like that. 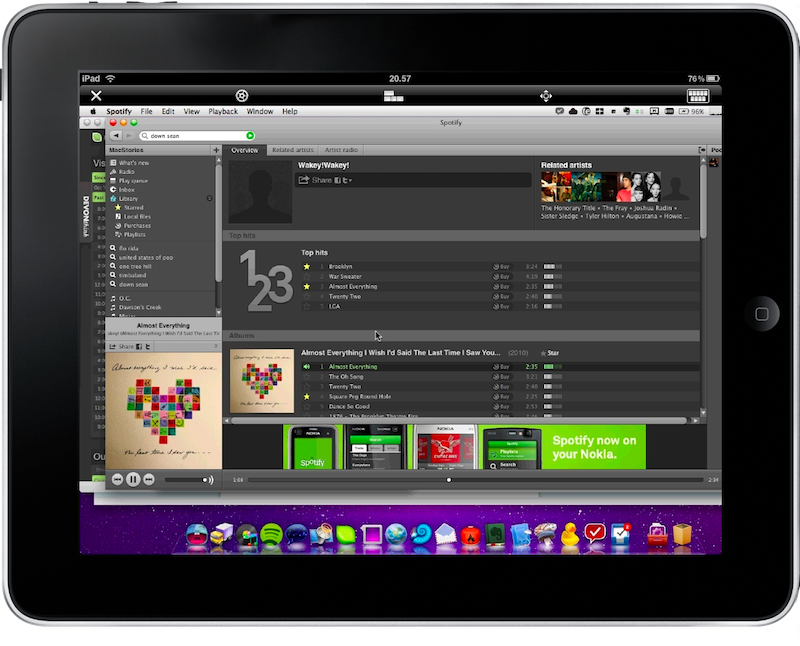 iTeleport is now available as a universal app, so if you buy the iPhone app you’ll be able to install it as a native app on the iPad as well. I was a previous customer of the iPhone version, and I got the iPad update for free. Also, let me say this straight up: it’s not the cheapest app ever. It comes at $24.99 in the App Store, so think about it very well before clicking the buy button.

Setting up access for the app is a breeze: just head over your Mac’s sharing preferences (in System Preferences) and enable stuff like screen sharing and remote management. Assign a password and you’ll be ready to go. Alternatively you can install a dedicated manager developed by the iTeleport guys, but I think that’s only needed when you want to access your computer using a 3G connection, which of course I haven’t tested on the iPad. So, just play around with your Mac’s preferences and forget about it. As for iTeleport’s settings (colors, refresh times) I just let the connection decide. If you have a decent one, performances will amaze you. 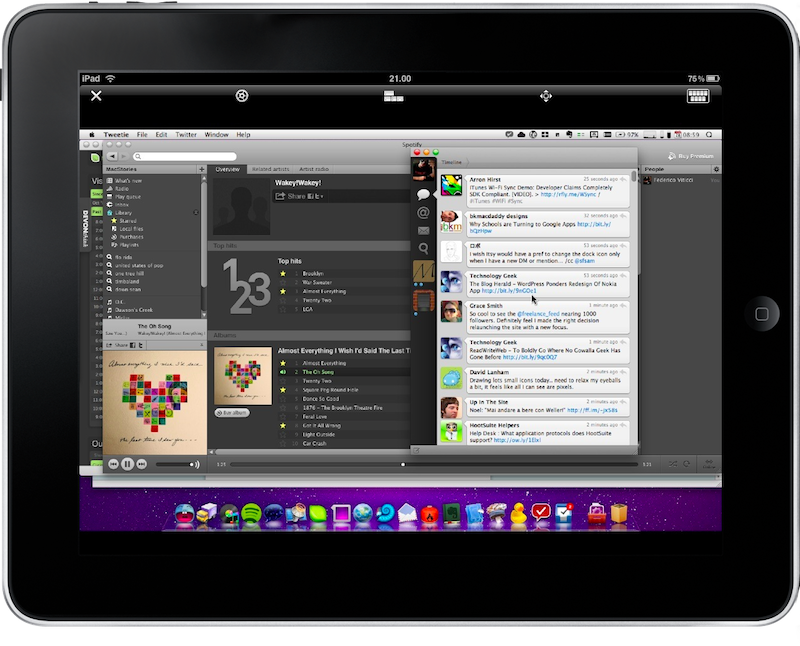 The coolest thing about this app, in fact, is that it tries to be as much natural as possible when rendering Mac OS X on screen, and it doesn’t want to somehow change what you can otherwise see running on your Macbook: I’ve seen apps trying to put weird custom menus and interface elements on screen in order to “make the desktop experience work better on a mobile device”, but I think that in the end you just need to make sure the touch input works and the app it’s optimized with a good engine. iTeleport does all of this.

It’s not like iTeleport doesn’t provide its own way to place Mac OS X commands on screen, but it’s so unobtrusive and elegant that you won’t notice it unless you really need it. Once you’re connected to your desktop computer, the app will just scale the screen and put it on the iPad. Sure you need to do some pinch and zoom sometimes, but I’m impressed that I can see my whole 15” display on the iPad and actually use it without even zooming. I just do it when I want to inspect an element better, but I can confirm that (in landscape mode) everything is usable and readable. To move your mouse - guess what - you have to move your finger around; you can enable a touch screen mode in the settings (which basically allows you to press buttons and stuff like they were native iPad buttons) but I prefer the normal way better. You’ll notice that the mouse pointer I’ll always have some distance from your finger, and while that could be confusing at first, you’ll get the hang of it in a very few minutes. 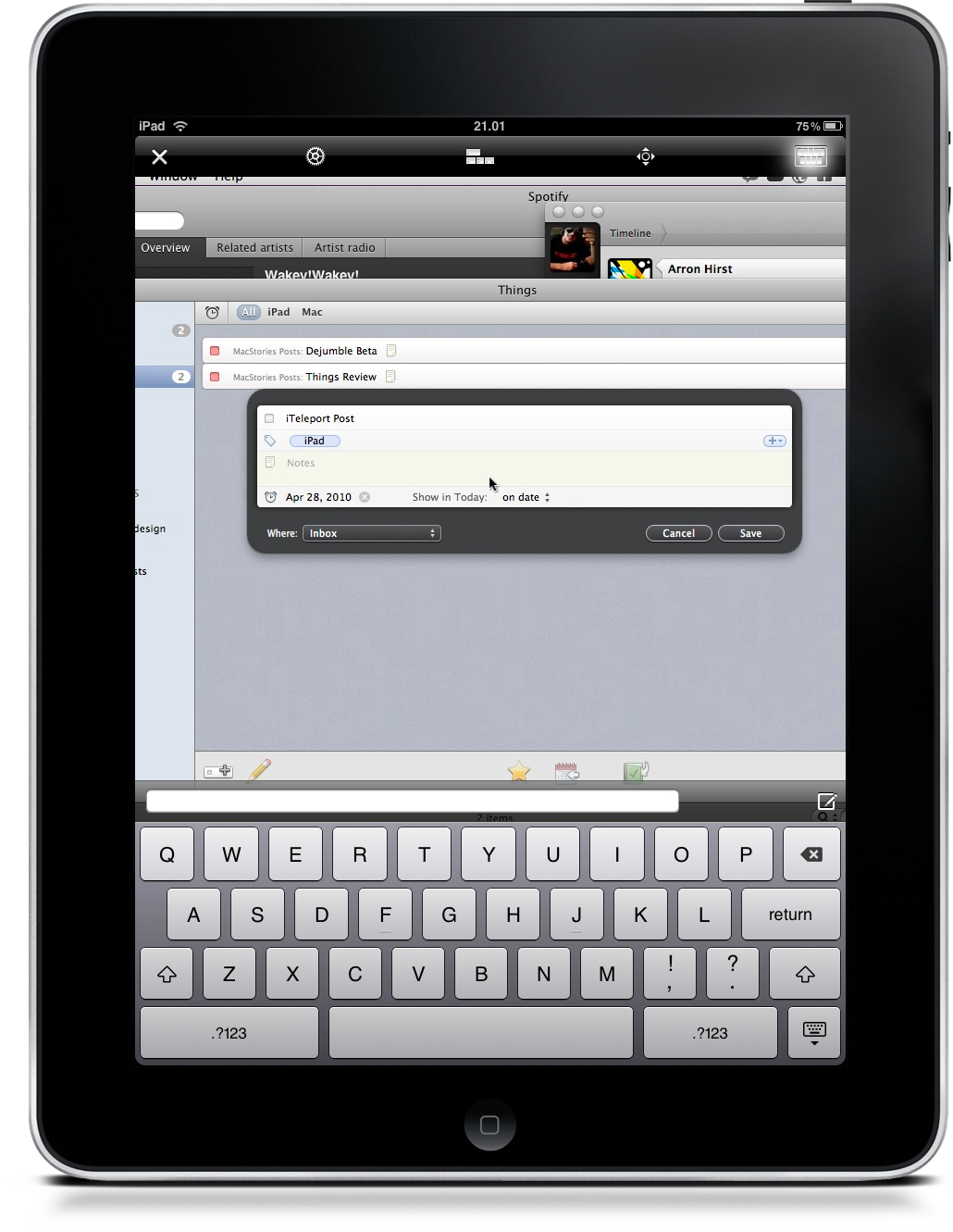 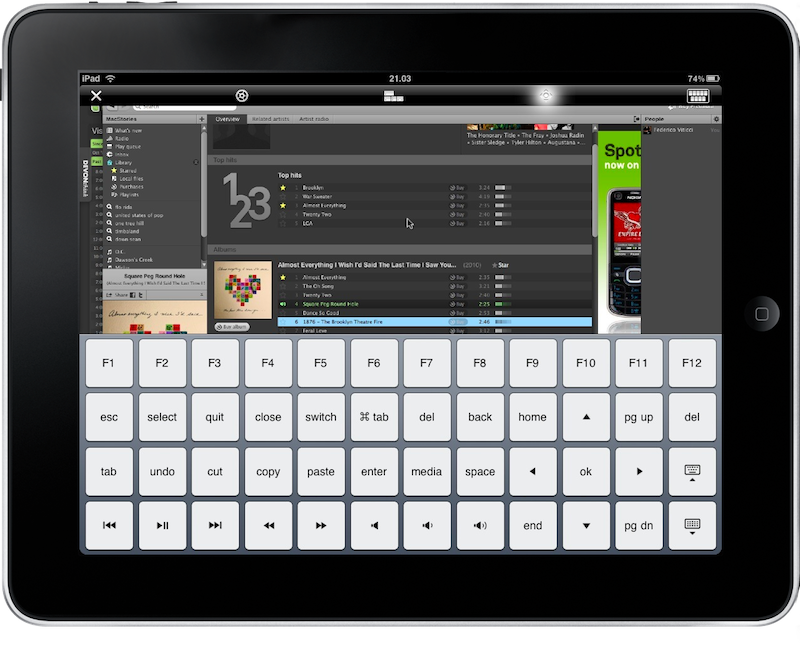 The way iTeleport solves the difficult “extra keys” problem is simple and effective: you have this top bar on screen, which you can dismiss at any time with a three finger swipe, that contains buttons to invoke different kinds of keyboards to type on your virtual Mac. Just take a look at the screenshots, but be sure that it works great and doesn’t get in the way until you need it. And yes, the app supports multitouch gestures, meaning that you can navigate through Twitter accounts on Tweetie just like you do on your Macbook. Now just think about all the applications you’ll be able to use just fine, and you have a fair overview of why iTeleport has made it to my home screen. About performances: the app it’s very good, but it’s highly dependent on your Internet connection. Mine is pretty good, and the app proves it.

If you want VNC on your iPad, get iTeleport. It’s simple to set up, fast and intuitive. I haven’t managed to find anything better than this. And starting downloads from the couch using the iPad is priceless.