Just as we predicted months ago, everyone wants to release its own tablet now. Apple has created a new market with the iPad (some say it has reinvented an already existing market that only needed a kickstart) and now we’re seeing tablets popping up from anywhere in the industry.

Now, Toshiba wants to release a tablet computer as well, to fight the incredible success of the iPad. They have this prototype, and they call it “Libretto” - which stands for “small book” in Italian. It doesn’t look exactly like a tablet computer, but more like a touch-enhanced netbook. It’s an interesting prototype, so let’s take a look at the specs. 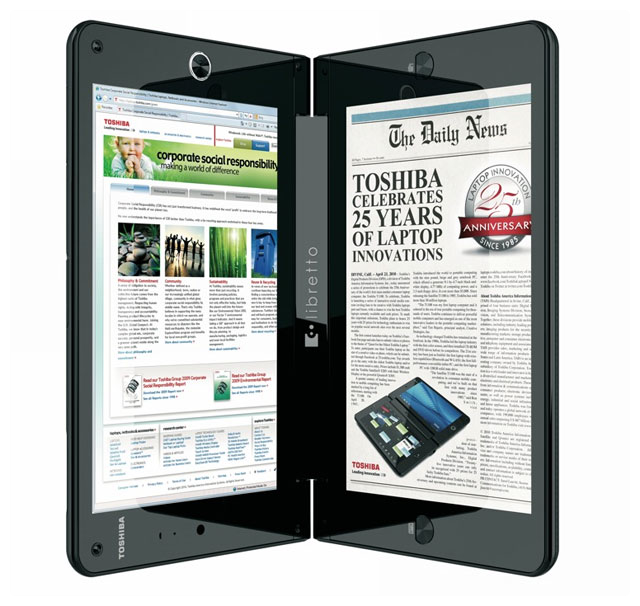 Robert Scoble has got the full report:

“Here Toshiba shows a new prototype they are calling the Libretto W100 that has two seven-inch touch screens that could make the netbook more interesting to potential iPad users.

Now, hardware is only 1/8th the battle. The rest is software and there Apple is way ahead, especially if Toshiba is forced to use Microsoft’s Windows, which, even with Windows 7, doesn’t feel as good on touch devices as Apple’s iOS does. Note, too, that for this prototype Toshiba had to custom build a new touch keyboard. But, at least you can see that such a hardware, if matched with Android, or with HP’s touch OS that it bought from Palm, that there’s a future for Japanese manufacturers. I found the idea to be compelling when I saw it, and could see lots of uses for a two-screen touch netbook. I hope they take it further than just a prototype.”

Technically, this thing seems very good. But as Robert writes, it’s about the software, it’s about the experience. The Toshiba Libretto is good, it’s better than any other alternative tablet computer I’ve seen so far, but until they’ll come up with a strong and well-designed OS, the iPad won’t have nothing to fear. You can’t release a tablet computer running Windows 7, just like a Mac OS X tablet wouldn’t work.