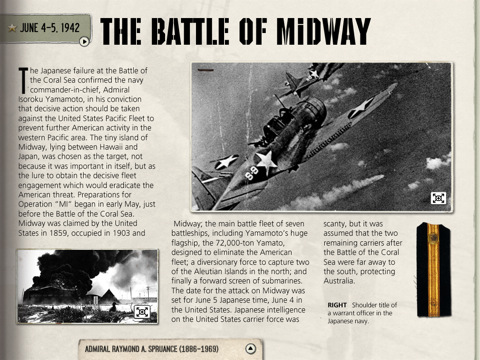 With their latest release for the iPad, Gameloft has temporarily decided to put games on the shelves and focus on a more historic subject like World War II. And instead of re-creating the conflict through another first-person shooter videogame, Gameloft created a completely interactive and immersive 56-page book filled with photographs, maps and fac-simile documents.

The app, War in the Pacific, features a foreword by Senior Military Advisor Dale Dye and was curated by Richard Overy, Professor of History at the University of Exeter. As you can see in the promo video below, the app (which also happens to be a 463 MB download, not exactly “lightweight”) comes with original video footage from 1945 detailing the battles against the Japanese Empire and sports some neat multi-touch gestures to navigate between pages, move documents on screen and re-arrange content. There are also animated maps showing the most important events in the Pacific and, overall, the photo archive really looks impressive.

War in the Pacific is available exclusively for the iPad and will cost you $9.99. I wonder if in the future we’ll see, for example, schools adopt this kind of single-subject interactive publications as a way for kids to learn faster, in a new way.