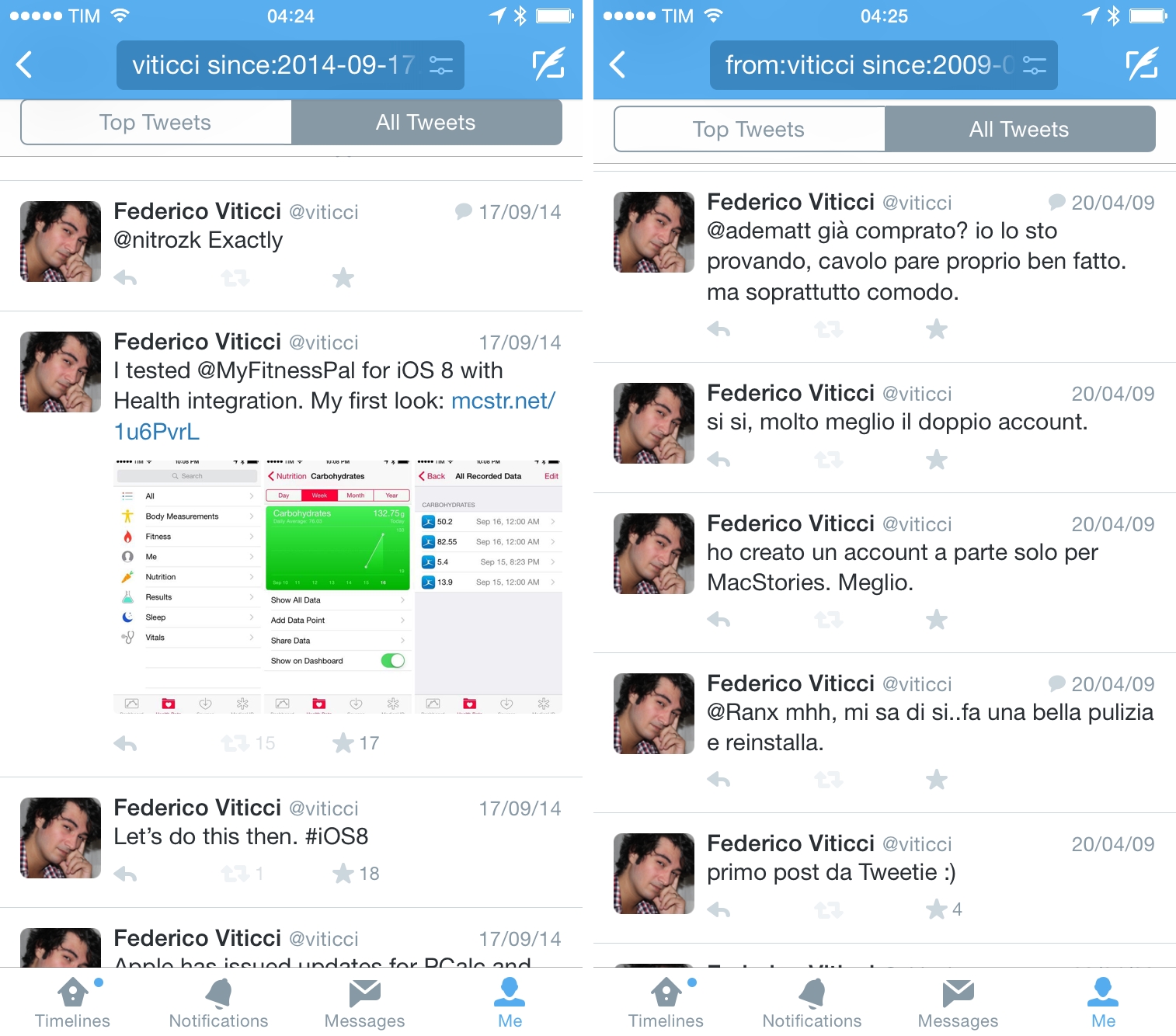 Since that first simple Tweet over eight years ago, hundreds of billions of Tweets have captured everyday human experiences and major historical events. Our search engine excelled at surfacing breaking news and events in real time, and our search index infrastructure reflected this strong emphasis on recency. But our long-standing goal has been to let people search through every Tweet ever published.

The blog post shares the technical details behind the technology (an impressive scale and undoubtedly a huge challenge), but I was more curious to try the user-facing aspect of indexed tweets and search in the official app for iOS.

For me, there’s tremendous value in being able to easily retrieve old tweets: I’ve written about the Twitter archive before, but today’s rollout brings retrieval of indexed tweets to the search section of the Twitter app – no need to download an archive. Twitter search used to be limited to tweets from the past couple of weeks; now, you can look for every public tweet sent since 2006.

In my first tests using Twitter for iPhone, I was able to find the first tweet I ever sent through search in a couple of seconds by simply typing words contained in its text. I then looked for other old tweets I remembered from 2009 and 2010, and the app brought them up instantly. Retweet and fave counts were correct, but I couldn’t load replies to those old tweets in the Twitter app.

Right now, old tweets can be found in search by switching to the All tab of the Twitter app, and Twitter supports a basic syntax to filter down tweets for users and dates. I was able to use two different search operators for usernames and dates:

Search operators (more here) can be used in the Twitter app and combined with hashtags and text to look more precisely in search results and find a tweet you’re looking for. You can even save advanced searches you come up with and reuse them at any time. And this makes for a convenient way to delete old tweets as well: find the tweet, and use the Delete button in the app to remove it.

Notably, these search features are currently limited to the official Twitter apps. I wasn’t able to find old tweets in search using the Twitter API in Twitterrific and Tweetbot. Twitter writes:

As a heavy user of Twitter as an information sharing and discovery tool, this is great news. I love to be be able to find old tweets so I can reference them or share them again. The public Twitter index is an impressive technical achievement and the right thing to do for the company. I’m extremely happy that it can be enjoyed on iOS as well.