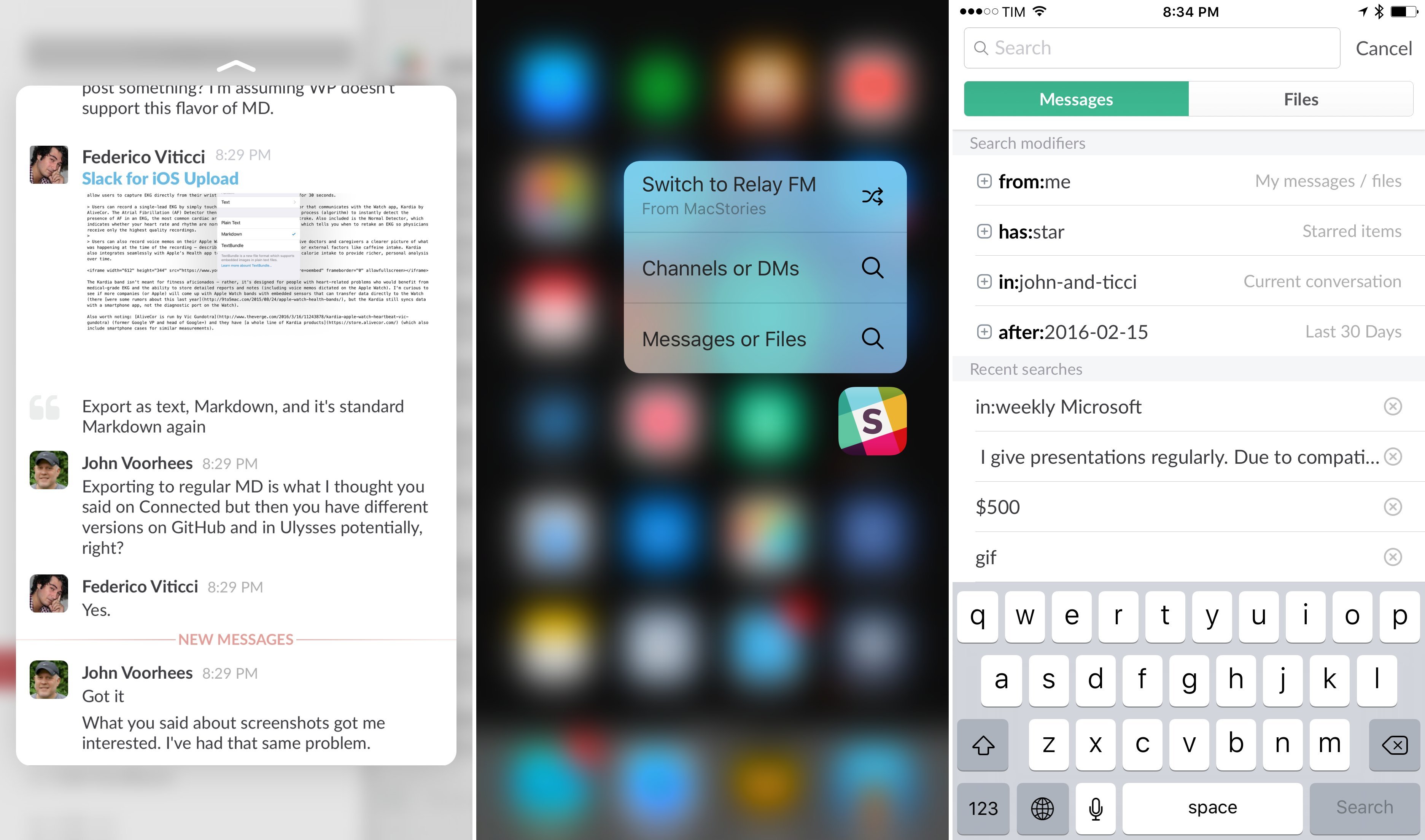 Slack has released version 2.8 of their iOS app today with some great changes to save time on the iPhone and iPad.

On the iPhone 6s, you can now use 3D Touch on the app icon to switch teams, open channels and DMs, and search for messages and files. While I would have liked to see the ability to pin specific channels and DMs to the quick action menu, the feature is welcome regardless as it cuts down the time I spend swiping to open the sidebar just to switch between teams (I think anyone who’s on multiple Slack teams can relate to this).

3D Touch is also used effectively inside the app: you can peek at channels and DMs from the sidebar, which is nice to see what’s going on in conversations without marking their notifications as read and jumping into a channel.1 When in conversations, 3D Touch comes in handy to peek at webpages shared as links – something I’ve been doing a lot in the 2.8 beta – but, alas, you can’t peek at images. I hope Slack will continue to add more support for 3D Touch in the future, as well as more customization for quick actions on the Home screen.

In terms of working with Slack on iOS, the company has finally added full notification controls to the iOS app. In a channel’s Settings page, you can mute a channel to prevent all notifications unless you’re mentioned. And in the app’s general Settings, you can adjust sounds, highlight keywords, and choose when you’d like to receive push notifications. I find these improvements useful when I’m writing on my iPad and I’d like to be reachable over Slack without being disturbed by an ongoing stream of notifications.

The other big addition I’m still learning to appreciate is search, which now has support for extra modifiers on iOS. Search modifiers are one of Slack’s most powerful features: there’s an entire syntax to master, and the Search Assist screen has been revamped in this release with shortcuts to commonly used modifiers and recent searches. For example, you can use has:links to filter messages that contain links, use during:March to retrieve messages shared during a specific month, and even combine multiple modifiers together (such as from:john has:links during:January) to come up with complex search queries. I love the idea of search modifiers, and I want to use them more going forward – I just wish I could also save searches on iOS to re-access them at any time.

Slack’s recently launched voice call functionality, unfortunately, isn’t part of this release, but it’s supposed to be coming soon. After some tests with the MacStories team over the past week, I’m optimistic that Slack calls will largely replace Skype for us, and I’m looking forward to future iOS releases.

Slack 2.8 is available on the App Store today.