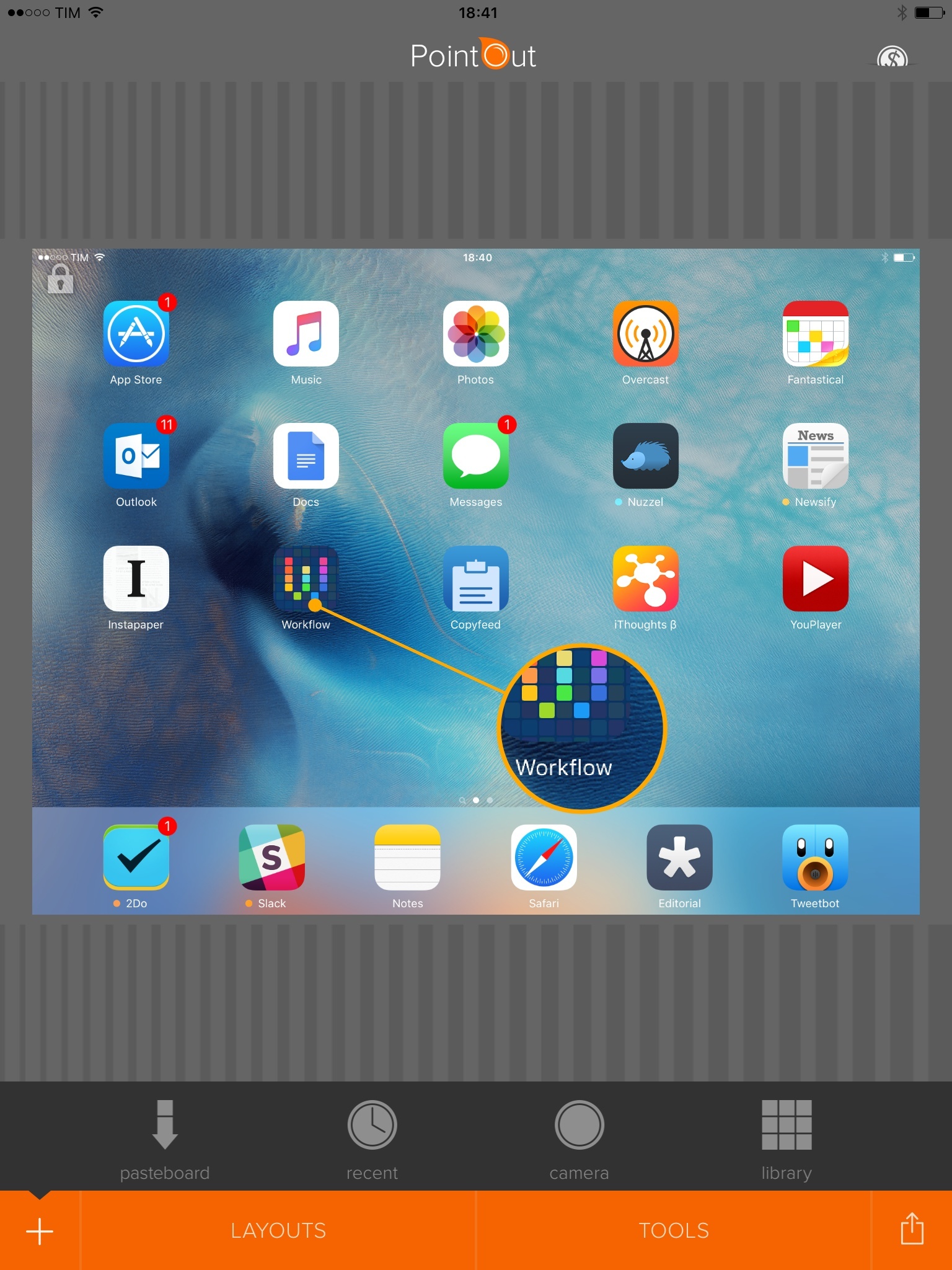 As I shared on Twitter last month and in the first issue of MacStories Weekly for Club MacStories members, I found myself having to call out areas of apps and system features in screenshots for my iOS 9 review.

What I wanted to achieve had long been possible with desktop apps such as Acorn and Napkin, but I had a surprisingly hard time finding apps which could add loupes on top of screenshots on iOS. I ended up using OmniGraffle with this workflow, but the process required too many taps. While I appreciate OmniGraffle’s powerful set of features, I don’t need all of them and I’d rather have a dedicated utility for this type of image markup.

Created by indie developer Demarca Marek Moi, PointOut is a free app for iPhone and iPad that supports multiple types of image annotations and canvas layouts. You can add pointers, borders, split the canvas in multiple sections (each zoomed on a specific image detail), and tweak colors and thickness for every element. It’s a powerful image annotation app with more options and controls than the simple (but also excellent) Pinpoint. But, I’m primarily interested in PointOut’s diagram-like loupe, added in the latest update and which matches exactly what I need for my iOS screenshots. 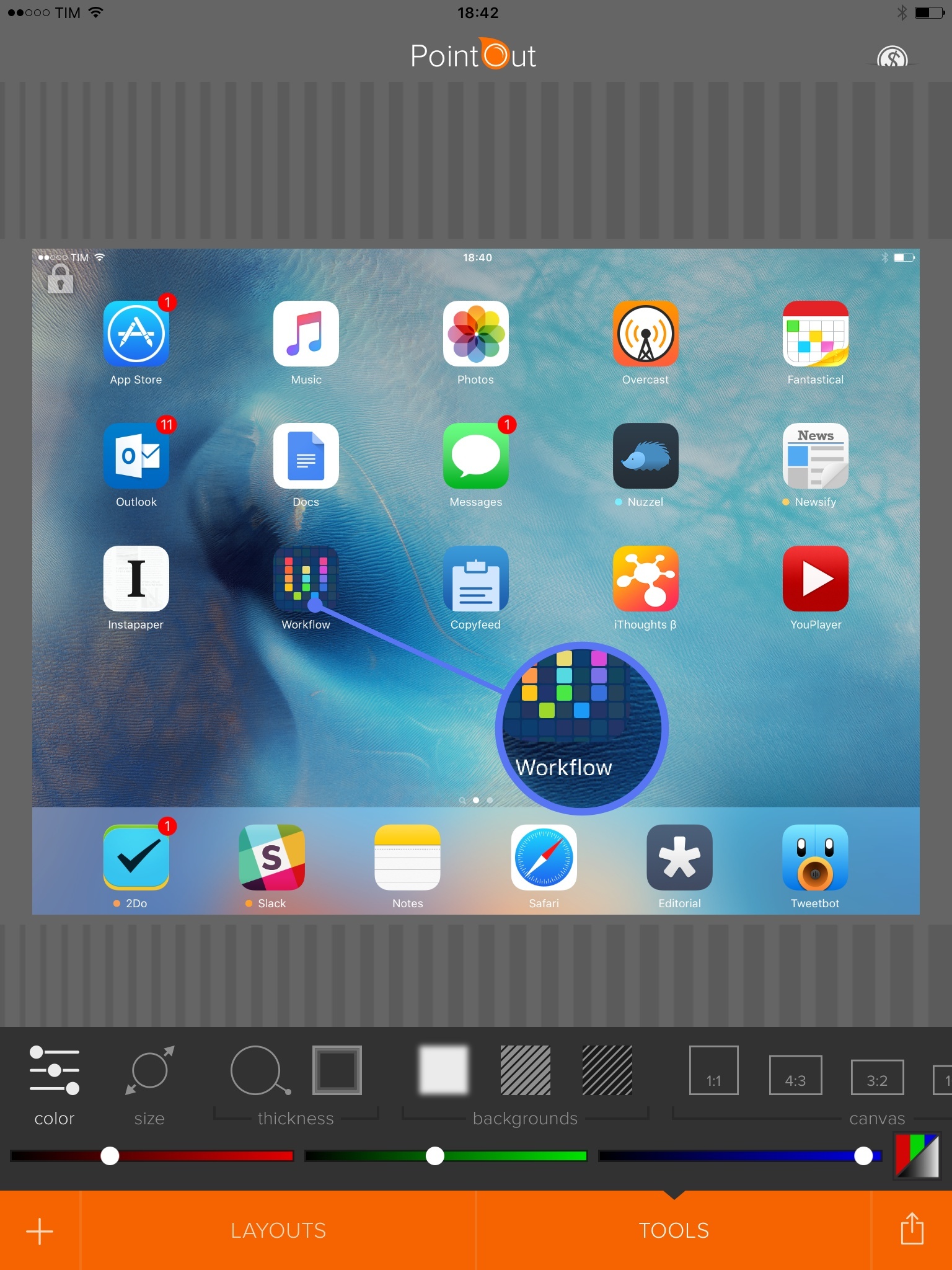 First of all, getting a screenshot into PointOut is easy. You can import an image from the clipboard (useful if you copied it from another app), use the last taken photo, or browse your entire library to pick one. Then, you can set the canvas’ layout to ‘Auto’ from the Tools menu so it’ll automatically adjust to the screenshot’s size, and pick layout 05 in the Layouts menu.

This new layout consists of a loupe attached to a dot; the dot has to be placed on the area you want to be zoomed in the loupe. You can control both the dot and the loupe’s placement with drag & drop, and colors and thickness can also be set in the Tools menu.

If you want, you can use Layout 04, which brings up an actual magnifying glass, rendered in a decidedly old-school skeuomorphic style. I find that to be a little too much for what I need, and I’m fine with the simpler, customizable loupe of Layout 05. When you’re done, you can tap the share icon, then tap More (three dots) to activate the system share sheet and save the annotated image elsewhere with extensions.

PointOut can do a lot of things, but I’m okay with using it just for these types of image annotations. I still find Pinpoint to provide an easier, just-import-and-place-arrows kind of quick annotation flow, but PointOut does exactly what I was looking for when it comes to highlighting and enlarging specific portions of an app’s UI. If you’d like to experiment, there are several options for backgrounds, line thickness, different callouts, and more. Surprisingly, the app doesn’t support landscape mode on the iPad, which I’d like to see fixed in a future update.

PointOut is free on the App Store and it offers three different levels of In-App Purchases to support the developer and unlock all present and future tools. They’re named after coffee and they’re explained in a dedicated page inside the app, which I obviously like. PointOut is now helping me with image annotations on a daily basis, and I wish I had this when I was working on my iOS 9 review.

You can download PointOut for free on the App Store.