We’re rapidly approaching that time of the year when Apple introduces new iPhones, and BuzzFeed’s John Paczkowski reported last week that the event will be take place on September 9. There will almost certainly be a lot to talk about after the event (Paczkowski says that the event will include a new Apple TV and iPads), but one thing that I’ve been thinking about is what the new iPhone lineup will look like. This was all precipitated by the discussion on last week’s Talk Show with John Gruber and John Moltz.

Because my mind was a bit fuzzy on the historical iPhone lineups (particularly the early years), I decided to go back and make a graph to simply and clearly show what Apple has done in the past. The dates I used were based on when each iPhone was available in the US (not the announcement date). Tier 1 represents the newest and most advanced iPhone available at the time. Although there are slight differences between the iPhone 6 and iPhone 6 Plus, they are largely identical (both have an A8 processor with 1 GB RAM, etc) and as a result I’ve characterised them both as Tier 1. Tier 2 represents the next best iPhone available (often the previous year’s Tier 1 model) and Tier 3 is the next best again.

What will the upcoming iPhone lineup be?

You can see below that I’ve come up with 9 potential options for what the upcoming iPhone lineup might be. I have no inside information, and I am not overly confident, but my guess is it’ll either be Option 1B or Option 3B. I’ve graphed Option 1B here:

I personally don’t think Apple will go back to a 4” display and will keep the iPhone 6s at 4.7” and the iPhone 6s Plus at 5.5”. In Tier 2 I think we’ll get an iPhone 6 reconfigured in a plastic shell (iPhone 6c), like we saw with the iPhone 5c – mainly so that customers can instantly distinguish between an iPhone 6s and an iPhone 6c. In Tier 3, an iPhone 5s makes the most sense to me and it would follow a trend that hasn’t been broken since the iPhone 3GS (every Tier 2 iPhone becomes a Tier 3 iPhone). 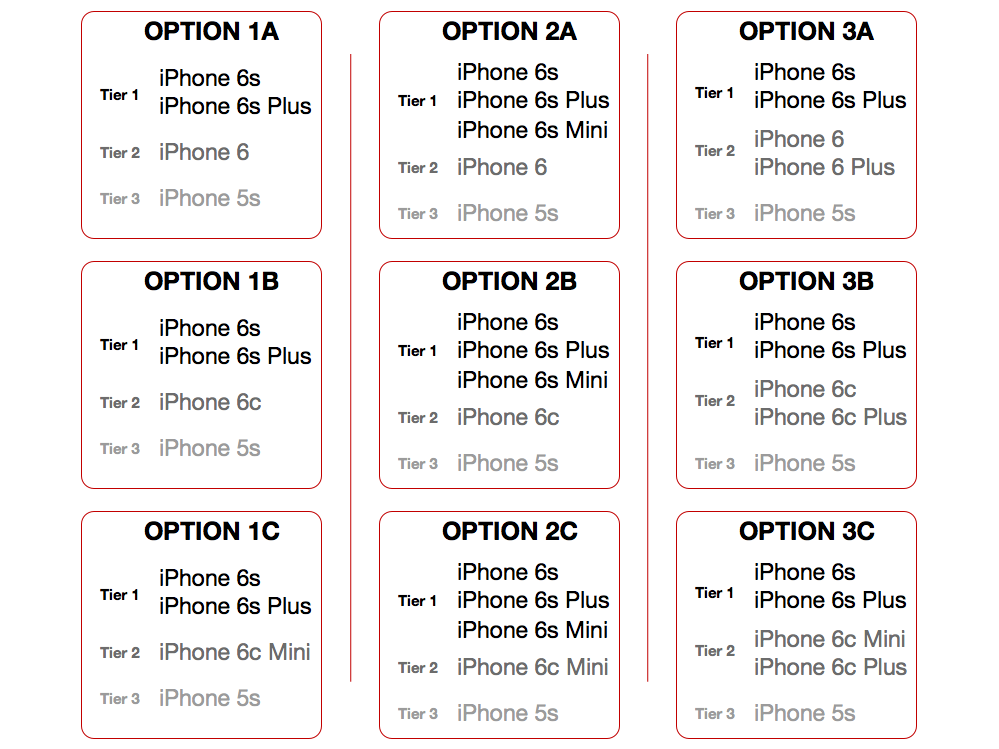 Some of the names are clunky, and I have a feeling that Apple may shake things up in order to simplify things. Nevertheless, for clarity I’ve stuck with simple and obvious names for this article. But for the elimination of doubt:

You can view the results after voting by selecting “see previous responses”.