Now that we’re approaching the one year anniversary of Apple Pay on October 20 and with Apple’s Vice President of Apple Pay speaking at the Code/Mobile conference later today, I thought it might be interesting to take stock of what has happened with Apple Pay so far, and what’s next for it.

Apple Pay in the US

When Apple Pay launched in the US, it was supported by the major American banks including American Express, Bank of America, Capital One Bank, Chase, Citi, Wells Fargo, and an additional 500 banks had already signed on with Apple to offer Apple Pay in the future. But the bigger problem for Apple was the lack of payment terminals that supported Apple Pay. At launch, Apple partnered with a number of retailers such as Whole Foods, McDonalds, and Walgreens to ensure Apple Pay could be used in those stores. In total, Apple said that over 200,000 stores could accept payments made by Apple Pay. In the first three days of its availability, over 1 million credit cards were registered with Apple Pay.

Today, Apple Pay is supported by 502 banks in the US and Apple Pay can be used in over a million stores which now accept contactless payments in the US. In a statement to Bloomberg earlier this week, Apple said:

“We’re off to a great start and we are seeing continued, double-digit monthly growth in Apple Pay transactions since launch,” Apple said in an e-mailed statement. “And our customers love Apple Pay – a recent survey found satisfaction rates of 98 percent. Merchants love it too and tell us that the added security and convenience Apple Pay brings their customers is a huge benefit.”

As Bloomberg noted in their article, statistics on Apple Pay from other research groups are less rosy. The Aite Group estimated that it accounts for just 1% of all US retail transactions. Panera Bread, one of the Apple Pay launch partners, says it accounts for “low single digits” for in-store transactions and around 20% of transactions made through their app.

Apple Pay in the UK

In the US, Apple had little trouble getting support from banks but faced the problem of limited support by retailers for contactless payments. In the UK, the problem was reversed – getting banks to support Apple Pay was problematic, but retailers already had the infrastructure to support it. The reason retailers already had the infrastructure for Apple Pay was because Apple Pay uses the same technology as contactless credit and debit cards – which were already popular with over 69 million in circulation (the UK population was ~64 million in 2013). In fact, in the six months prior to Apple Pay, Britons spent £2.5 billion ($3.84 billion) using contactless cards.

A likely sticking point of negotiations between UK banks and Apple would have been the fee that Apple receives when a customer uses Apple Pay. The Financial Times reported that ultimately the UK banks struck a better deal than their US counterparts:

While the deals struck between Apple and the banks are confidential, the tech group receives about 15 cents per $100 transaction in the US, while in the UK it gets “significantly less” — only a few pence per £100 transaction — according to banking insiders. Apple declined to comment.

Even though it took nine months to launch in the UK, just eight banks supported Apple Pay. Perhaps most troubling of all, was that just one of the so-called “big four” banks (Royal Bank of Scotland) supported it. In an embarassing moment for HSBC, their Twitter account leaked the launch date of Apple Pay, only to have to delay their support of Apple Pay by a few weeks due to “some issues”.

Today, Barclays remains the only “big four” UK bank to not support Apple Pay, but they are expected to support it in early 2016.

Last month we introduced two new categories; the first is Apple Pay, an entirely new way to pay for things in stores and in apps…The second new category is Apple Watch, our most personal device ever and one that has already captured the world’s imagination.

As Ben Thompson pointed out, what Cook did by saying that was put “Apple Pay on the same level as Apple Watch. It is no hobby”. Which is why it is all the more surprising that nearly a year on, little progress has been made on rolling out Apple Pay outside the United States. 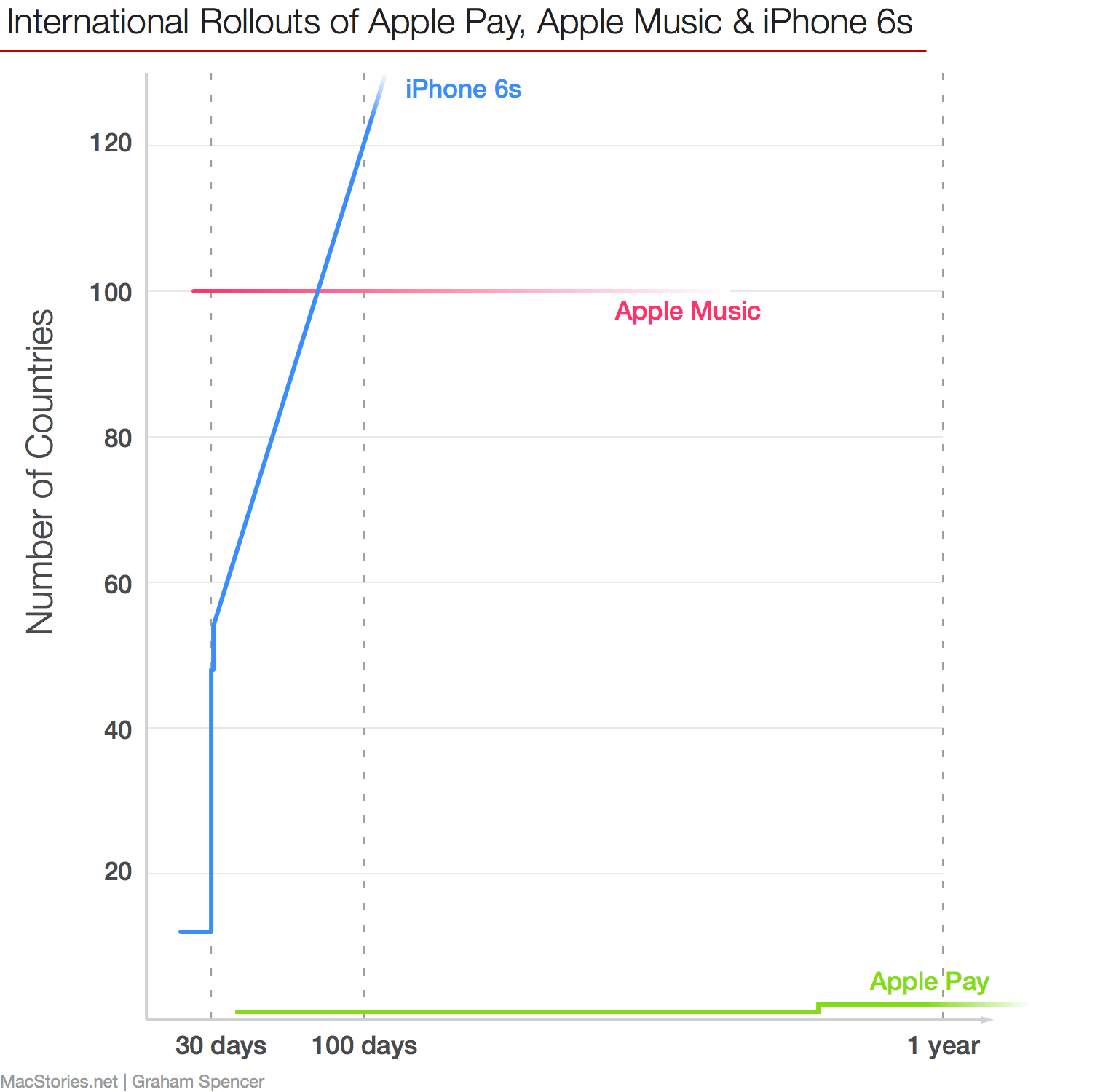 But it appears from reports that the reason why Apple Pay hasn’t yet launched in any other countries (besides the US and UK) is because Apple is fighting with the banks over how much Apple should be paid for every transaction made via Apple Pay. 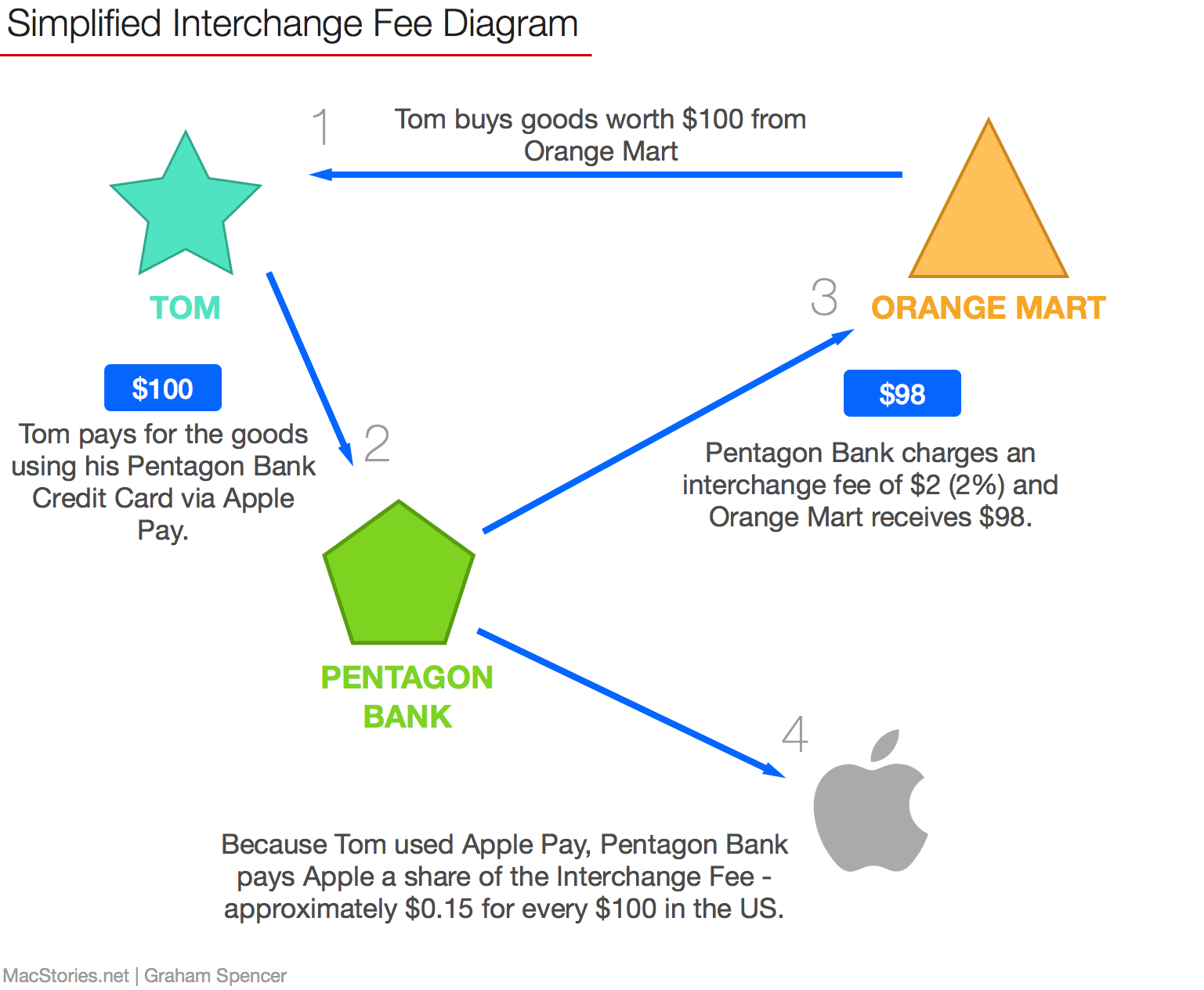 The interchange fee has become a sticking point in negotiations between Apple and international banks because outside the US the interchange fee is much lower. In the European Union, interchange fees have been capped at 0.2% of the transaction value for debit cards and 0.3% for credit cards; at those levels, Apple’s 0.15% cut is clearly untenable. This is no doubt why in the UK, the banks ultimately reached an agreement where Apple would get “a few pence per £100 transaction”.

There are reports from Australia, China and Canada, all claiming similar battles between local banks and Apple:

In the United States, Apple is believed to earn about 15¢ on every $100 of transactions. It is understood Apple has been asking for the same amount of interchange fee in Australia.

The Reserve Bank of Australia is trying to push interchange fees down even further, to an average of 30¢ per $100 of transactions. This increases the stakes in the negotiations between the banks and Apple in how to share the interchange-fee pie.

Another source said the obstacles were over profits. In the United States, Apple Pay says it gets 0.15% of the 2% fee paid by merchants for each credit-card payment and half a penny for each debit card payment.

But Chinese banks argued those charges were too steep, an employee of a large bank said. Many large banks that are already part of mature point-of-sale networks do not want to lose such a large percentage of their profits in a deal with Apple Pay, he said.

The Wall Street Journal reporting on Apple Pay in Canada:

Jennifer Bailey, Apple’s Vice President of Apple Pay, will today appear at Re/code’s Code/Mobile conference. Given that, here are five questions I’d ask Bailey if I had the chance: