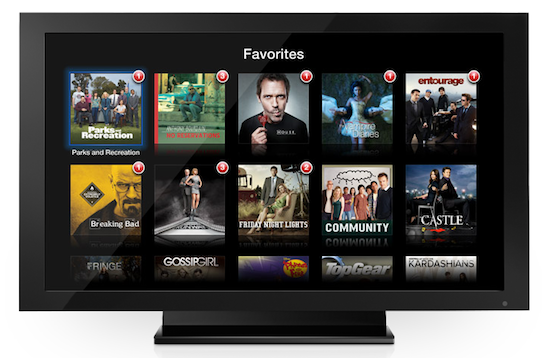 Jean-Louis Gassée notes how the “Apple television” that’s been long rumored among Apple fans and the tech press will have to face two problems: architecture and implementation.

As many imagined, the device would look something like this:

Imagine a true plug-and-play experience. One set with only two wires: power and the cable TV coax. Turn it on, assert your Apple ID credentials and you’re in business.

But then it would come down to getting cable channels into the set:

Large carriers, such as Comcast, are known as Multiple System Operators, MSOs, with an emphasis on the “M”. They’re a patchwork of acquired systems that have never needed to be compatible. This would either restrict the TV set to a small number of carriers, or make the product more complicated and prone to more bugs — and more field tech visits.

And on top of that, Apple would have to solve the problem of easily troubleshooting a 50-inch screen, or simply figure out a way to get people to upgrade to newer models of “Apple TV set” every couple of years:

We’re willing to upgrade our laptops, smartphones, and tablets every year or two because Moore’s Law keeps improving the CPU and other electronics at the rapid rate that made the computer industry’s fortunes. An integrated Apple TV set wouldn’t benefit from better electronics as naturally as an iPhone does…unless, of course, the tiny iOS computer is implemented as an easily accessible plug-in module.

I’d argue that the television market is so variegate, and potentially lucrative, that there’s more to figure out and correctly implement than U.S. cable providers and MSOs. Looking at Apple now, it’s hard to see a company willing to disrupt a market with a brand new, premium device…available exclusively in the United States. Even the Apple TV, “not part of the stool” and still considered a hobby, was released in the United States and Europe last year. Then look at the iPhone. It took almost four years to get there, but as it turns out the majority of profits now come from regions outside Americas (and iPhone is “key driver” of Apple’s revenue in Greater China – more context here and here).

The problem with the Apple TV set isn’t an “American cable company” (you name it) – it’s the television market as a whole. If we take in account the segments and population that can afford an HDTV nowadays – assuming it falls somewhere in between the $500 - $3000 range – it’s easy to see how Apple will have to make a product that ultimately just works with any television content provider in the United States, Europe, and Asia. Why would they ignore those markets?

There are greater issues to solve and differences to consider in the international TV market. Just a few examples: Italy still switching from analog to digital TV, satellite’s popularity in many areas of Europe, or some ISPs’ offerings with Internet/ TV packages. Supposedly, Apple will have to come up with a solution to work around these, in several countries. Italy may not be Apple’s finest source of revenue, but Europe/Japan/Asia-Pacific combined made for $14.94 billions of revenue in Q3 2011. I’m just assuming some of these Apple customers would also be interested in a TV set from Apple.

We don’t know what Apple has in mind, we can speculate on the company’s margins for such a device – we can only imagine that there is a market to disrupt because the current television sets are too difficult to configure and troubleshoot, with different user experiences and fragmented interfaces, store fronts, or even remotes.

I believe the question isn’t what will the TV set from Apple look like, as we can make a pretty accurate guess about that. Rather, I’d speculate on how many markets Apple is willing to enter at once, and its timing.