Another year, another batch of Siri improvements aimed at enhancing what’s already there, but not radically transforming it. Siri in iOS 13 comes with a handful of changes, all of which are in line with the types of iteration we’re used to seeing for Apple’s intelligent assistant. Siri now offers suggested actions in more places and ways than before, its voice continues becoming more human, and perhaps this year’s biggest change is a new SiriKit domain for media, which should enable – after the necessary work by third-party developers – audio apps like Spotify, Overcast, and Audible to be controlled by voice the way Apple’s native Music, Podcasts, and Books apps can be. 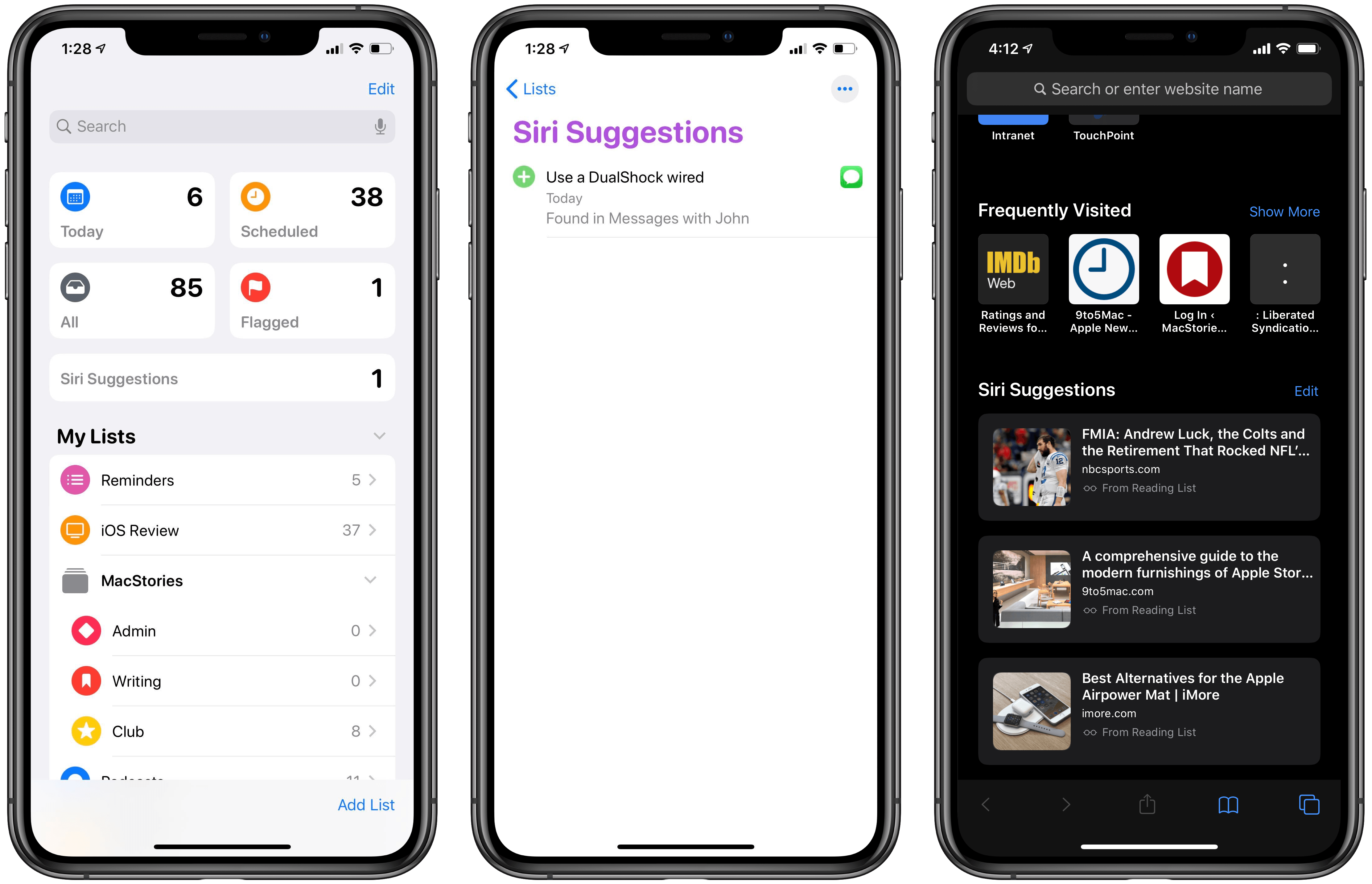 Siri Suggestions in Reminders and Safari.

Siri Suggestions first debuted in iOS 9 with a monicker that would eventually encompass several different proactive intelligence features. Thanks to Siri, in iOS 9 you could see suggested contacts or apps from the Search page; the latter feature later became a proper Today widget. Jumping forward two years, in iOS 11 Siri intelligence extended to Apple News articles, knowledge results in the Safari address bar, and more; last year the Shortcuts app brought Siri-suggested shortcut actions. In iOS 13, Reminders and Safari are the apps that benefit most from suggestion upgrades. For a feature that’s received such steady expansion, it’s no surprise Apple continued building new Siri Suggestions features into iOS 13.

Working in tandem with an app like Messages, Siri can recognize a potential todo inside your conversation that you might want to save as a task in Reminders. When this happens, the suggestion will be surfaced in two places: inside Messages itself, with a banner that appears at the top of the conversation, and also inside the Reminders app in a new Siri Suggestions list that only appears as needed. Reminders’ suggestions make it easy to create a new task with a single tap, offering valuable new utility and giving users another reason to try the new Reminders app. This is one of the most useful suggestion types I’ve ever encountered. 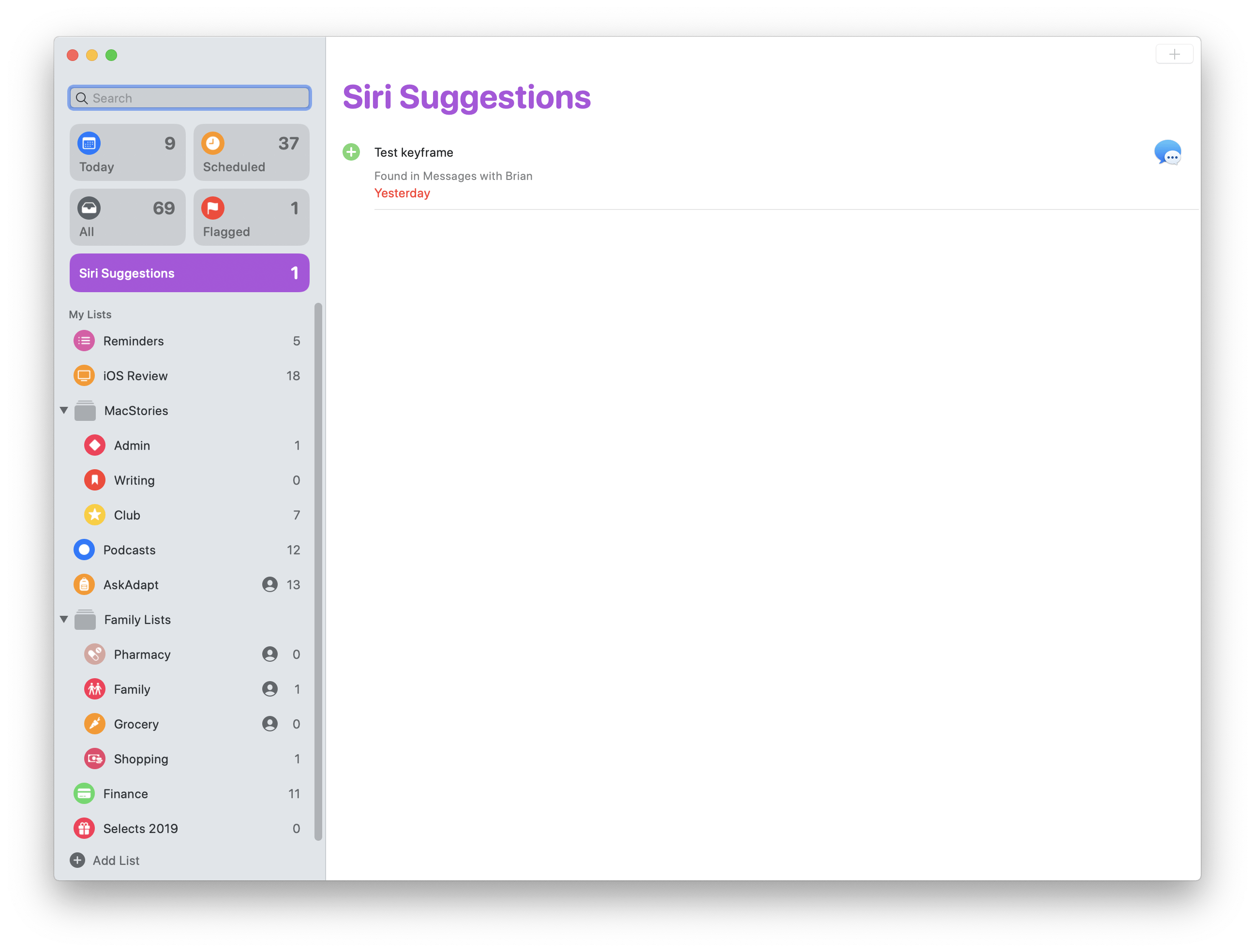 In Safari, Siri offers suggested sites to visit on the app’s new start page. At the bottom of the page, below your Favorites and Recently Visited sites, the new Siri Suggestions section highlights a few sites spanning a variety of sources. You may see suggestions from your Reading List backlog or your bookmarks, or Siri might suggest a link you were recently sent in Messages or that you had open on another device.

Siri’s voice last received a big upgrade two years ago, in iOS 11. This year’s changes aren’t as significant, but they’re noteworthy nonetheless. Using machine learning dubbed Neural TTS (Text to Speech), Apple has built a Siri voice that’s now entirely generated by software, no longer using any audio clips from human actors. This results in a voice that sounds more natural, particularly in the way it emphasizes different parts of words. As demonstrated at WWDC, the gains afforded by Neural TTS are most noticeable in Siri’s longer responses, but side-by-side comparisons reveal the improvement in shorter responses too. 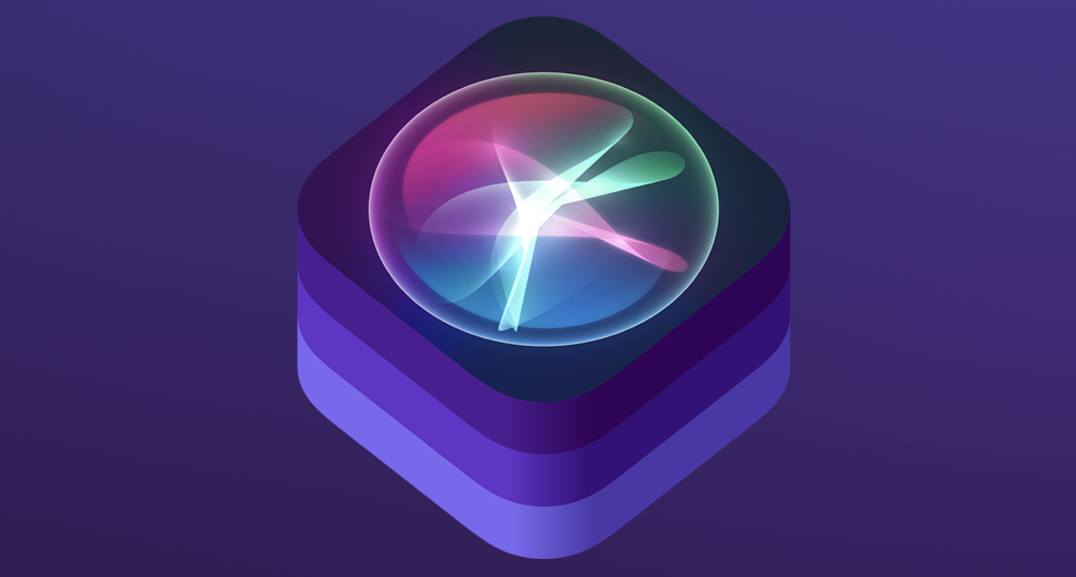 Earlier this year Spotify filed a complaint against Apple with the European Commission, alleging monopolistic behavior and specifically citing several advantages that Apple Music held over Spotify – one of those advantages was access to Siri. Though the debut of Siri shortcuts in iOS 12 meant Spotify could build a type of Siri integration, it could never have been the full-featured experience Siri enables for Apple Music. With iOS 13’s new media domain for SiriKit, however, Spotify and other third-party media apps like Overcast and Audible should in theory be able to gain rich Siri integrations beyond what shortcuts enabled last year.

It’s difficult to say much about this new Siri feature because I haven’t been able to test any apps that support it. Once apps do support it, however, SiriKit adoption will enable more powerful, flexible voice interactions for audio clients than ever before.

The framework Apple has built includes support for searching an app’s vast content library to play anything contained in it, which is a huge upgrade over what could be done with Siri shortcuts. You can play a specific album or playlist from your own library, or play one from the app’s full content database. There’s support for liking and disliking songs, adding them to your library or a specific playlist, managing playback controls like shuffle, repeat, and queue management; with podcast and audiobook apps Siri can also be used to adjust playback speed.

If and when third-party apps add SiriKit integration, they’ll be able to provide Siri experiences that are almost as good as what Apple’s own apps and services provide. I say “almost” because, despite how functionally rich Siri support can now be, the one drawback of SiriKit apps is that you need to always include the app’s name in your Siri commands. So adding phrases like “in Spotify” or “in Audible” will be necessary, while they aren’t today for Apple’s own Music and Books apps. Because Apple won’t let you change default apps, you’ll always need to add those clarifying words, making SiriKit almost – but not quite – on par with first-party Siri support.

Siri has long had strong support for interacting with Reminders, often serving as a much more convenient way to create reminders than using the app itself. While reminder creation is improving in iOS 13’s Reminders app, it’s also getting better with Siri.

Historically, if you wanted to create several items in Reminders via Siri, you needed to issue separate commands for each todo. But in iOS 13, that’s no longer the case – sort of.

Another pretty sweet change to Siri/Reminders in iOS 13: you can *finally* save multiple items to Reminders with a single command.

Perfect for shopping lists, and eventually HomePod. (iOS 12 Siri on the left.) pic.twitter.com/fjphWROLNx

Adding a natural list of items, such as “apples, oranges, and bananas,” can be done all in one command, and Siri will discern that you want three separate reminders created rather than a single one. Interestingly, Siri seems to do this best for certain types of items – food products are the only example that’s reliably worked for me, which makes sense because grocery items are surely the most common use case here. Other examples worked sometimes, but not as reliably. I’m not sure what Apple’s doing under the hood to parse Siri requests, but as a simple tool for easier grocery entry, I like what they’ve done. 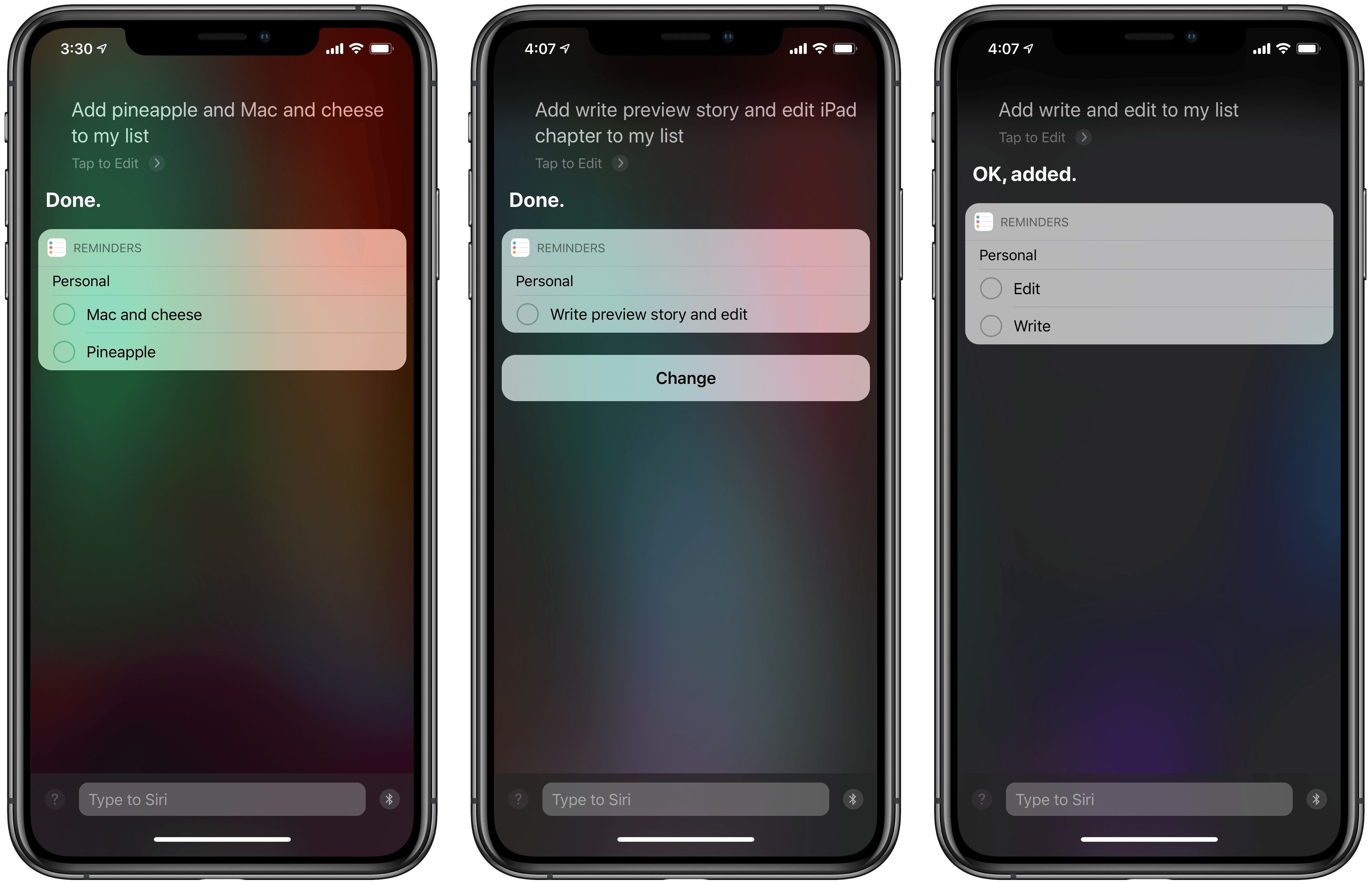 Every year that Siri gets steadily better, the likelihood of a major overhaul coming for Apple’s assistant seems slim. Although many suspected the hiring of John Giannandrea to lead Siri meant such a transformation was in the works, nearly a year and a half into his tenure there haven’t been any noticeable changes that indicate a new approach for the assistant; instead the improvements that have been publicized fit well with Apple’s existing Siri strategies. iOS 13’s Siri updates are a perfect example of that: there’s nothing particularly surprising or revolutionary here, simply a continuation of the work Apple’s been doing for years – more suggestions, another SiriKit domain, and an even better voice.

It’s possible Apple has introduced significant changes under the hood to improve Siri’s reliability and accuracy – typically considered more fundamental issues than the lack of any particular features – but that’s a hard improvement to quantify publicly. Maybe Siri’s getting better, and maybe it isn’t; without hard data from Apple, our anecdotes are the only judge. What we do know, however, is that iOS 13 introduces new Siri features that are welcome – especially the SiriKit media domain – but don’t radically change the Siri we’ve had for years.