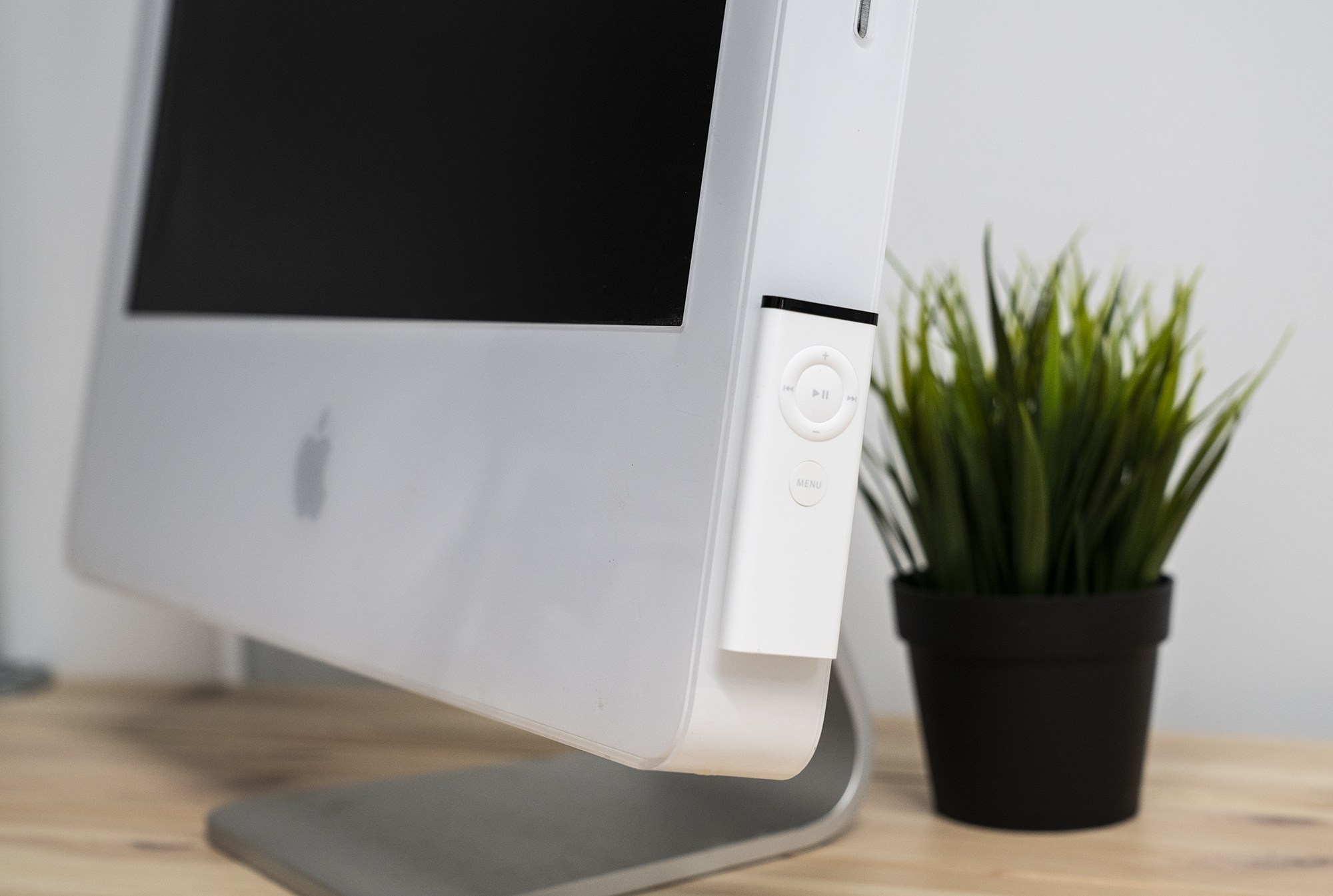 As a young kid, I thought magnets were about the coolest things ever. Here in my 30s, I kind of feel the same way.

Magnets made nerdy headlines recently, with the new iPad Pro, which is chock-full of them to keep its Smart Keyboard Folio in place. Marques Brownlee had a tweet showing off just how many are in the tablet’s thin chassis:

Apple’s use of magnets in its products goes back further than the most recent iPad Pro, with its keyboard and Apple Pencil, or even the fun and functional AirPod case. Magnets allow Apple to do things without the need of mechanical components, keeping the design of its products clean and streamlined. Here are a few of my favorites over the years.

The Clamshell iBook G3 was a ground-breaking machine for many of reasons, but today, I want to talk about how the lid closed.

Unlike the hooks and latches used on other notebooks, the iBook closed through a spring-loaded hinge and magnets. This made the computer more rugged, which served the machine well in the homes and schools where it was often found. 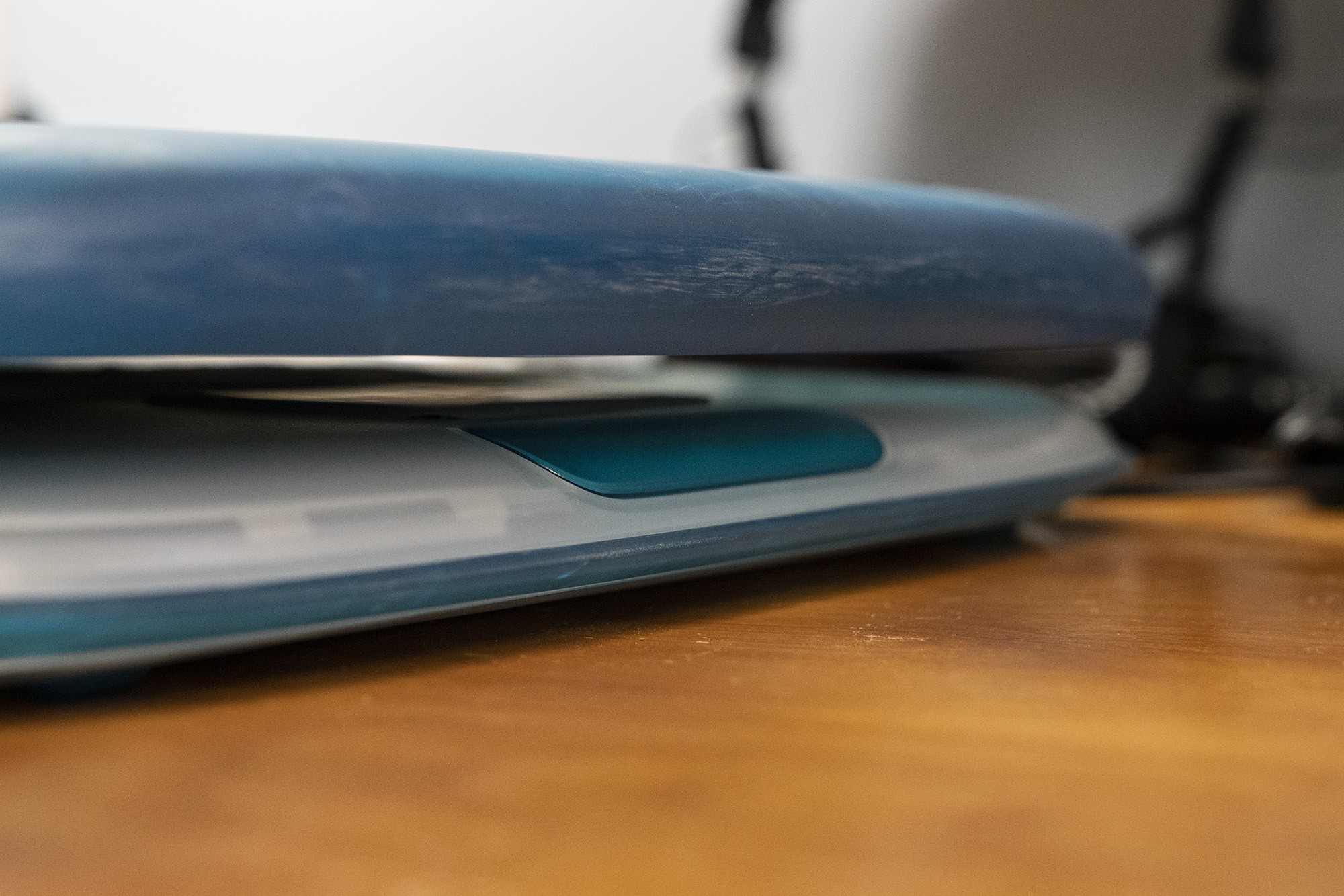 Oddly, Apple didn’t stick with this strategy for very long. In 2001 when Apple revised the iBook, it came with a more traditional latch to hold the lid closed. 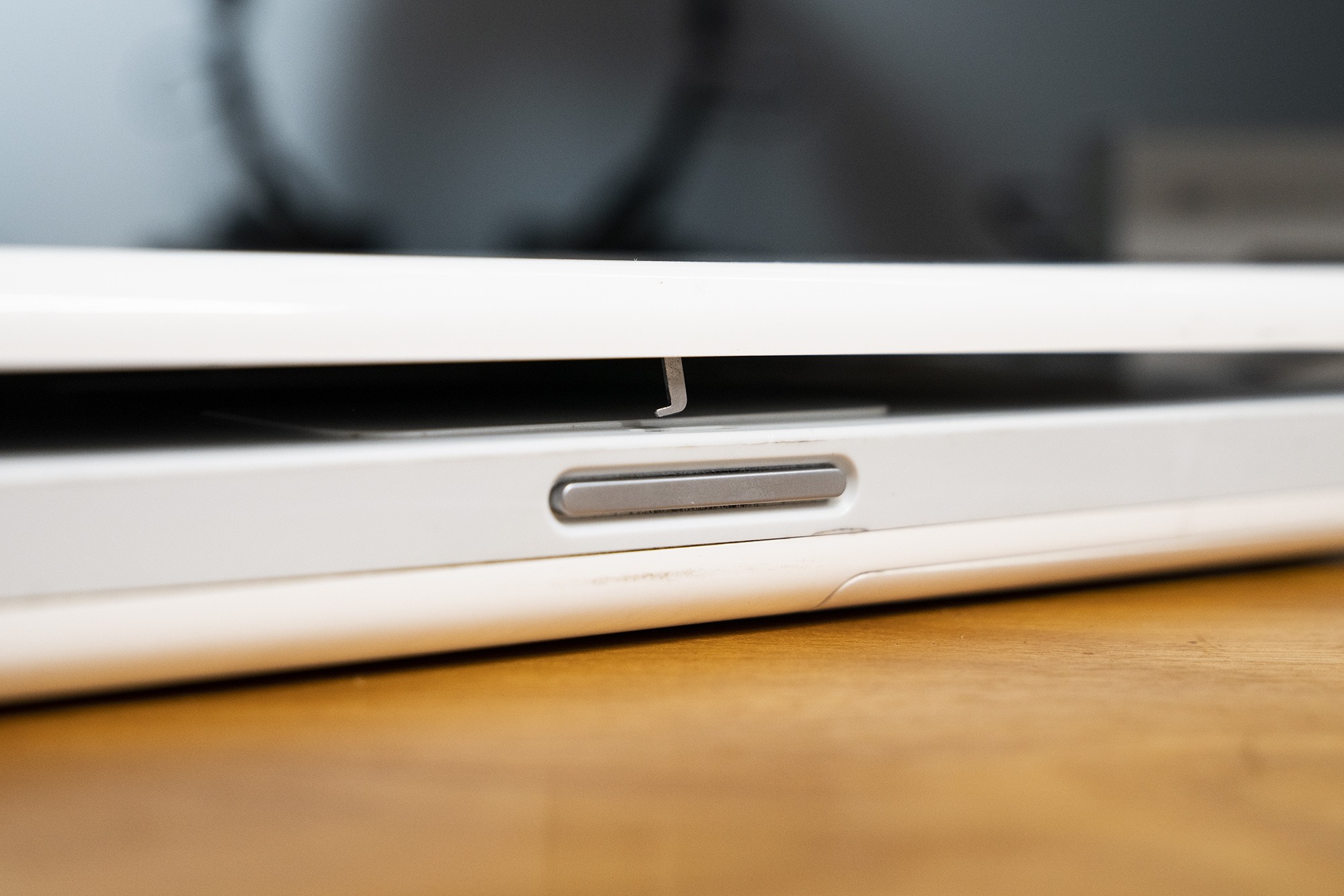 The PowerBook and MacBook Pro used latches for many years, until the unibody MacBook Pro showed up in 2008. (As if to rub salt in the wound, these tiny latches were pulled from their resting positions with magnets.)

Lid management is not the only way Apple has used magnets in its notebooks, as this support article explains:

Your MacBook, MacBook Air, or MacBook Pro might go to sleep unexpectedly if a magnet is placed under your computer or on its palm rest.

For example, in the iBook G4, this magnet is nestled into the frame around the display, and when the laptop is shut, lines up with what is called the reed switch. This switch detects the magnetic field and tells the machine to go to sleep. To the user, however, it all just works seamlessly.

The iMac G5 came with Front Row, Apples now-defunct multimedia software for enjoying movies, music, photos and DVDs on your computer from across the room. Front Row is a story for a different time, but part of its genius was the dead-simple remote Apple shipped with it: 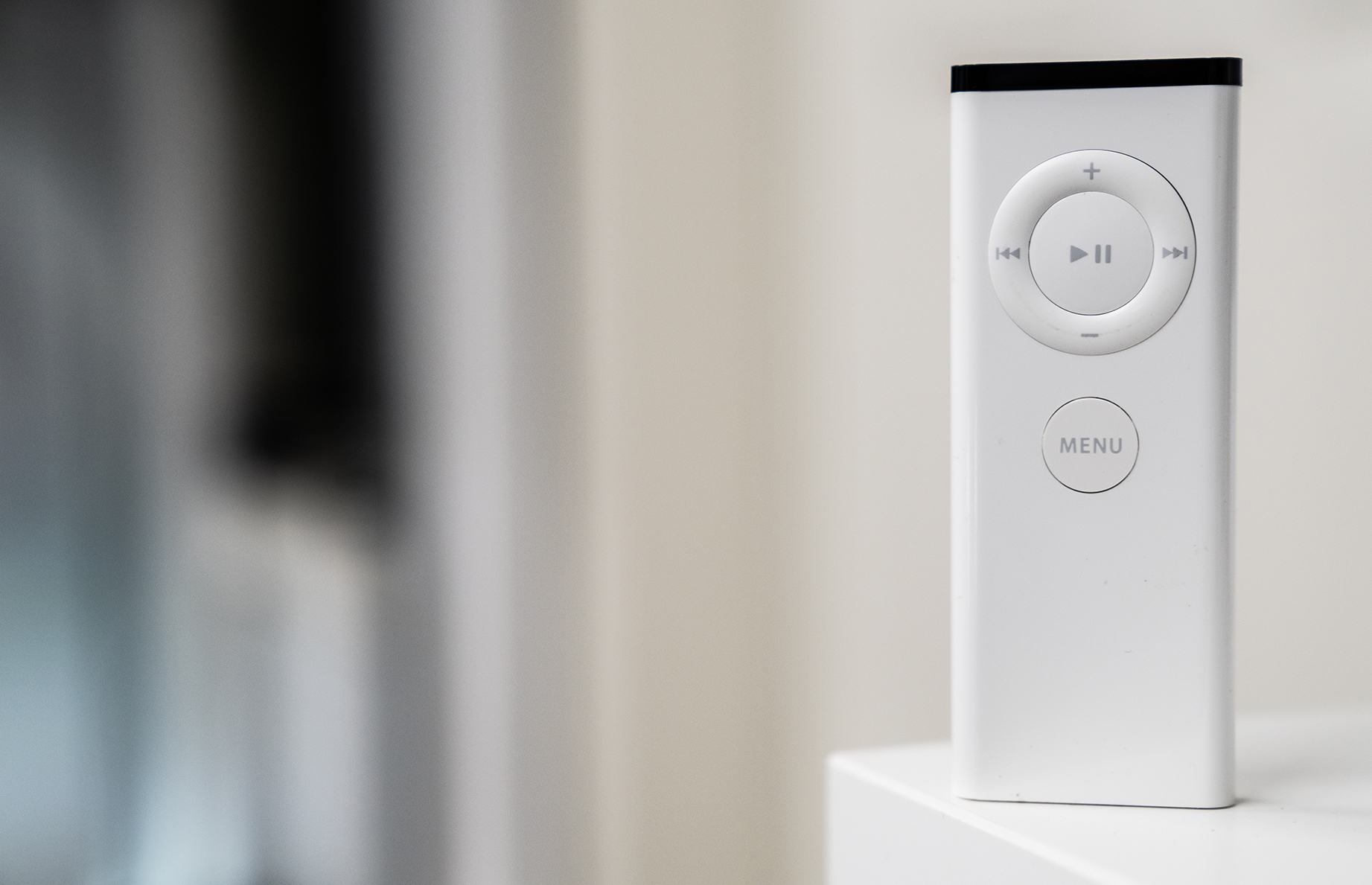 If that design looks sort of like an iPod, that was the point. It was simple and easy to use, even without looking at it.

The remote is not much larger than an iPod nano, and it would have easily gotten lost in between the proverbial couch cushions. To help prevent this, Apple used magnets to make a tidy little storage location for the remote, right on the side of the iMac.

The magnetic attachment allowed the remote to be stored out of the way, but in plain sight. Grabbing it to open Front Row was breathless, and putting it back when finished didn’t take any fiddling whatsoever.

The MagSafe adaptor is perhaps the most well-known use of magnets to Mac users. First introduced with the original MacBook Pro way back in 2006, MagSafe promised a future where simply tripping over a power cable wouldn’t guarantee a massive laptop repair bill.

The idea behind MagSafe is that tripping over the laptop’s power cord won’t do something horrible like rip off the power jack or launch the computer off your desk and onto a hard floor below. And it works as advertised: in several attempts to topple the MacBook Pro, the MagSafe connector did its job, releasing its attachment to the computer and falling harmlessly to the floor.

Hard-core PowerBook users (and IT managers, for that matter) will roll their eyes at the introduction of a new Apple power-cord style, because it will force them to buy more new adapters as supplements and extras. But it’s been several years since the last time Apple switched adapter styles, and the advantages of the MagSafe connector are worth the slight inconvenience.

In 2012, Apple rolled out MagSafe 2. The idea was the same, but the connector was thinner, allowing Apple to build systems like the MacBook Pro with Retina display. Despite the size difference, MagSafe 2 kept the promises made by its predecessor. I avoided several catastrophes thanks to this ingenious solution.

However, all good things come to an end, and with the addition of USB-C and Thunderbolt 3, Apple retired MagSafe. I love that I can plug my MacBook Pro into power from either side, but the USB-C connector will allow a cable to yank a notebook right off a table, crashing to the floor.

There are several products on the market designed to revive the idea of MagSafe by putting a magnetic connector on the end of an USB-C charging cable, but reviews are usually mixed, and unless you are really accident prone, are probably not worth the risk and expense.

The new iPad Pro may use magnets in some inventive ways, but much of that started with the iPad 2 and the original Smart Cover:

The first Smart Cover had an exposed metal hinge as opposed to the fabric-covered ones we have today, but it introduced the idea of having a simple cover that could double as a stand.

Magnets aligned the cover to the spine of the iPad, keeping it securely in place. Another magnet served as a clever way to sleep and wake the iPad; covering the screen slept the iPad, and uncovering it woke it up. I always appreciated this modern take on what notebooks had been doing for years.

The Smart Cover may have been an optional accessory when introduced in 2011, but today, the Smart Keyboard Folio is practically a must-have item for iPad Pro users, and it benefits from the groundwork laid by the original, keyboard-less design.

The Apple Watch has used magnets in several interesting ways. The first is its magnetic charging puck, something any Apple Watch customer uses every day. While other smart watches and fitness trackers depend on tiny charging ports or pins with flimsy, clip-on chargers that easily break, the Apple Watch charges with no moving parts. The puck simply self-aligns and snaps into place.

Apple didn’t stop there with the magnets. A couple of Apple Watch bands use magnets to stay closed.

The most popular example is probably the Milanese Loop, which allows infinite adjustability. A magnetic clasp at the end of the loop lets the overhanging end attach securely to the band, locking in the size.

The smaller Modern Buckle uses a magnetic closure as well. Designed to look like a single piece, the clasp is actually two parts that magnetically join, as Serenity Caldwell wrote at iMore in her 2016 review of the band:

Unless you experience rapid changes in your weight, or are prone to lending out your bands, you’ll have to adjust the Modern Buckle precisely once. The five adjustment holes are hidden along the inside of the inner clasp, with a single tiny pin; adjust it to the hole sizing you prefer, and you literally will likely never have to touch this again.

That’s thanks to the Modern Buckle’s upper magnetic clasp: Two steel pins hook into the inner clasp, where they’re held tightly with magnets; to release it, you need only squeeze the buttons on either side.

While I enjoy magnetically-attached things, I have a bad habit of wearing them out — largely because I end up fidgeting constantly with the magnet and wear down the associated pins and clasp. But by and large, Apple seems to understand the whole “make a solid magnetic connection” racket: I’ve owned a Modern Buckle since June, worn it hundreds of times (and fidgeted with it every time), and the clasp has yet to feel like it’s losing its grip. I did accidentally trigger the opening mechanism once last July — by leaning my wrist against a table while also resting my head on my arm — but the fall was a short one, and I’ve yet to repeat that ridiculous action.

Sticking It to the Future

I expect as Apple’s products continue to get smaller and more portable, we will see small magnets doing more and more. They are a way to introduce subtle delight into a product, something Apple does exceedingly well.

Besides, who am I to argue with Breaking Bad’s Jesse Pinkman?