With today’s release of iOS 5, Apple has added a significant new feature to their Messages app with the introduction of iMessage. Seamlessly integrating into the existing Messages application, iMessage is a new service from Apple that acts as a replacement for the traditional text message service that comes with mobile phones.

In actual fact, a more accurate description of the Messages app with iMessage on iOS 5 would be that it improves on the traditional text messaging service whilst maintaining compatibility with it. The new iMessage service works by associating a person with an Apple ID - rather than a particular device or SIM card as the traditional text message service does. This is one of iMessage’s advantages, you are not restricted to a single device and you can now use your iPad or iPod touch (and hopefully Mac soon) for receiving and sending messages to other people.

Jump the break to read the rest of our iMessage overview.

The Messages app on iOS 5 can send either an iMessage or a traditional text message, which one is used will depend entirely on who you are sending the message to. If the person you are sending the message to is also signed up for iMessage (determined by whether their phone number is on Apple’s database) then your message will be sent through iMessage - if they aren’t on Apple’s iMessage database it will go through the traditional text messaging service. This selection process and database check is done automatically and instantly, with no user action required.

An important piece of information to convey here is that unlike the traditional text messaging service, iMessage is not tied to a particular device or SIM card - it uses an Apple ID. Consequently the Apple ID you entered during the iOS 5 set-up phase will be the one used, by default, for iMessage. The Apple ID can be changed from within the Settings app, but more importantly you can also set up “proxy” email addresses through which you can receive iMessages. These proxy addresses act as gateways through which iMessages can be funnelled into your Apple ID, which is what actually stores your messages. If you have an iPhone your phone number is also added automatically to this list of “proxies”.

When sending an iMessage, it doesn’t matter whether you have that person’s Apple ID email, one of their proxy addresses or even their phone number - as long as they have associated it with their Apple ID, it will be sent to them through iMessage. Obviously if they do not have iMessage and you enter their email address, your message will not be sent, but if you enter their phone number the Messages app will revert to sending via the traditional text messaging service. The key point here is that the Messages app will default to sending messages through iMessage and revert back to the traditional text messaging service if iMessage isn’t available.

There really isn’t much difference between an iMessage and a traditional text message. Both can send text to one or more people whilst also supporting the transfer of images and videos. The only real difference is that there is a much higher word limit per iMessage and everything is transferred through the internet via the iMessage service, rather than a carrier - meaning no exorbitant costs for sending images or video. Similarly, any iMessage will be delivered with a push notification from the Messages app, just as it would be done if it was a traditional text message. From my experience, iMessage is as quick at sending and receiving messages - perhaps even a bit quicker, especially with multimedia. The iMessage service is fully encrypted and the service will display a “Delivered” note next to each message to indicate a successful delivery and there is also the option of sending ‘read receipts’ - these simply allow the other person (who sent the iMessage) to know that you have read their message.

Messages on all your iOS devices

A consequence of developing iMessage is that Apple can now offer the Messages app on the iPad and iPod touch because the service needs nothing more than an internet connection. It could well be (and it is my belief) that Apple specifically developed iMessage in order to get a good messaging service on the iPad. Apple is intent on seeing the iPad be the Post-PC device that is core to our digital lives and they have inched it closer to that reality with every iOS update. iOS 5’s big push has of course been the PC-Free and iCloud features which sever the shackles between the PC and the iPad - and iMessage should be seen as part of Apple’s move to make the iPad independent and distinct from other products.

Text messaging is an increasingly important way of communication and for it to be restricted only to a mobile phone seems increasingly absurd with the advent of Facebook messaging, Twitter direct messages and a thriving selection of apps in the App Store. Independently those options work fine, but the user experience is not optimal, because users must remember what service to use for contacting a specific person. iMessage should help significantly reduce this confusion, and has potential to be even more significant if Apple plays its cards right.

One shouldn’t discount the fact that the iPod touch also gets iMessage, making the device even more useful - particularly for older children and young teens who can now communicate with each other without parents worrying about giving their kids a phone and all the associated text messaging costs, when perhaps they don’t really need one yet. 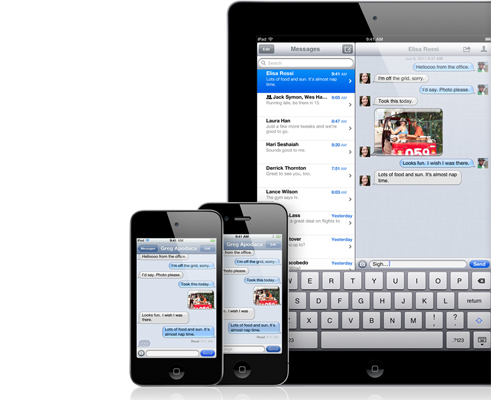 Unlike the similar service of Blackberry Messenger (BBM), there is no separate app or division between your collection of text messages sent through your carrier and those messages sent using iMessage. All your messages live on inside the Messages app that has existed since iOS 1.0. This transparency is one of iMessage’s strongest virtues; average users probably won’t even really notice a difference and because iMessage requires virtually no user interaction to set-up, millions of people will start to use iMessage within days. This fast take-up is vital to the success of iMessage, because the best benefits only start once most of your contacts use iMessage. Incredibly, it could be an iPhone owner’s phone bill where an average consumer first actually notices the presence of iMessage, with a reduced number of text messages and (if their carrier charges per text message) a reduced bill.

I’ve described above the transparency through which iMessage integrates with the Messages app, although there is a small exception. When sending messages through iMessage, your text will now be encased in a blue bubble - rather than the traditional green bubble. It’s a distinct difference between sending through the two different services but it is purely a visual indicator that does not impinge on the user experience. The only other distinction that Apple has employed is the mention of “iMessage” in the text box - another visual indicator.

iMessage also helps spread the iOS 5 theme of “iCloud is the truth” - no matter what iOS device you are using, all your iMessages will be in sync. It’s incredibly satisfying to receive an iMessage whilst using your iPad and not having to search around for your iPhone (which could be in another room or charging) and read it straight away and even respond right there and then. Some might call it lazy, but in reality it is just getting rid of yet another time-wasting problem that we should be glad to get rid of.

A source of potential annoyance

As explained earlier, messages sent through iMessage will appear on any and all of your iOS devices that are associated with your Apple ID. As more and more of the people you contact upgrade to iOS 5 and start using iMessage, this will mean most of the messages you receive will go to all your devices. But for those that don’t upgrade or don’t use an iPhone, Messages will automatically revert back to the standard text messaging protocol - which isn’t an issue, except for the fact that those messages can only be sent and received on an iPhone. This doesn’t make iMessage useless, but it is an annoyance in that some messages will go to your iPad whilst some won’t - it means you could never rely solely on the iPad to get all your messages.

The annoyance I have described above is a problem that I am afraid will never go away. Because iMessage is a completely closed system (unlike email or text messaging), it will likely only ever be integrated into Apple devices - I doubt Apple would even bother developing Android or Windows Phone 7 apps that can use iMessage (despite Google and Microsoft developing apps for iOS). At the moment iMessage tries to make messaging a simpler experience by integrating it onto all of your iOS devices, but it fails in reaching its full potential because the reality is that not everyone is going to use an iOS device. Unlike some other features, this means that even those who do use iOS devices lose-out because they can’t use iMessage to contact their friends who don’t have an iOS device.

I don’t hold out much hope for Apple opening up iMessage though, as I think it is unlikely Apple would make one of its core features of iOS 5 an open platform and take away a point of differentiation - they probably feel it accomplishes enough in its current state and would point to the 250 million plus iOS devices out there in the world. FaceTime perhaps proves this is the most likely outcome, because when it was launched in June last year, Apple originally said it was going to be an open standard, but 15 months later they haven’t said a word. Nonetheless, Apple has used FaceTime as a big selling point for the iPhone 4 and featured it in widespread ad campaigns. With that said, Apple has shown signs of opening up platforms and services both in the past and with iOS 5, some examples include iTunes, Safari and Photo Stream - all of which are available on Windows.

At the very least though, I would like to see a Mac client of iMessage sometime soon.