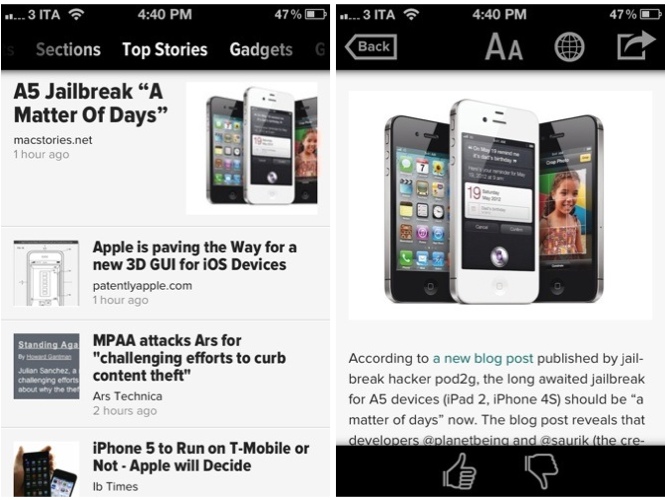 Often overlooked by iOS geeks in favor of Apple’s iPad app of 2010, Flipboard, Zite is a great “personalized news service” that I had ignored too, but started using a lot more recently. It has become an essential piece in my daily news consumption and discovery worlkflow, even more so than Flipboard which, unfortunately, is still largely based (at least on the iPad) on presenting content from your social streams in a new way, not necessarily making new content surface. That’s where Zite “clicked” for me.

Last year, one of the biggest trends of the App Store and software developers was that of launching “social magazines” and “personalized newspaper-like experiences” that leveraged social networks and your online friends to display content (articles, videos) in a new format. After Flipboard came out on the iPad and quickly captured the tech press’ hearts and eyeballs with a beautiful design and fresh approach to Twitter and Facebook, dozens of more or less similar services popped out promising to offer a better experience than Flipboard. Among them was Zite – at least I thought – and I easily dismissed the app as yet another take on the category that Flipboard created. Sometimes it’s good to be wrong, and I surely was.

Zite looks great both on the iPhone and iPad (I think it looks even better on the iPhone; I’ll let the screenshots talk for themselves), and it has a minimal learning curve. You log in with your Twitter, Google Reader or Read It Later accounts and the app starts learning about the things you read and the articles you like. These social networks serve as a foundation for the recommendation engine of Zite; over time, Zite will combine articles from your social streams with the ones from your friends on those networks and again with other links the service has captured and analyzed from the relationship with you, your friends and other Zite users to create a highly personalized “social magazine” that’s different for everyone.

On the surface, Zite’s recommendation system seems pretty simple and clever. The design of the app encourages tapping around and discovering articles, giving a “thumbs up” or “thumbs down” to certain types of articles, authors, or categories. Don’t like a post about Apple rumors? Give it a thumbs down. Like a post from Shawn? Choose to see more articles from Shawn Blanc within Zite. How about selecting iPad, iOS and App Store as recurring sections in your daily publication? You can do that, too, by adding new tags to Zite’s “Sections”. 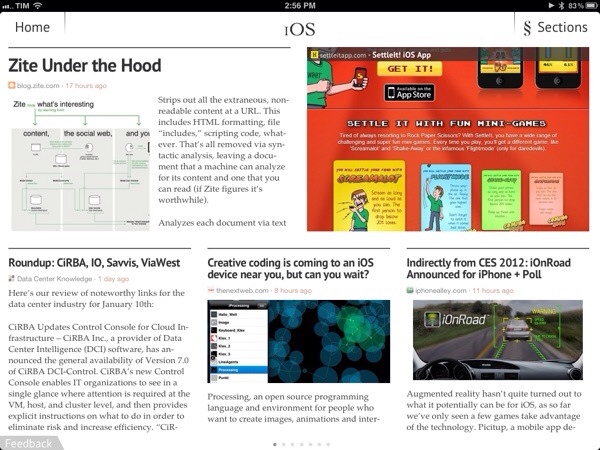 Zite’s developers (now part of CNN) surely did their homework when it comes to iOS interactions and trends: users can save articles to a variety of online services including Evernote and Instapaper; the app can switch from Reader view to a classic web view mode; the iPhone app, released in December 2011, presents a radically different interface based on swipes and scrolling gestures, rather than taps.

But it all gets a lot cooler when you understand how, exactly, Zite manages to give you content you’re actually interested in, getting better every day in finding material you’re likely to read, like, and share.

In a blog post published yesterday, the Zite developers have illustrated some of the basic concepts behind the service’s engine. Here’s what Zite does to URLs:

Once the URLs are parsed, analyzed and collected within the service, the developers say “the more you interact with it, the smarter Zite gets about you”. How do articles I like jump from the service’s servers to my iPad? Through a couple of interesting tricks: 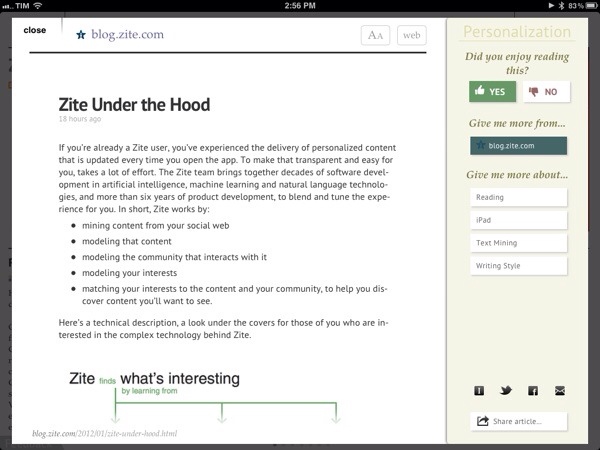 I’d love to really get into the technical details and ask the Zite folks what kind of software they’re using server-side and how they’ve managed to scale everything in the past year, but I guess what really matters for the end user is that Zite’s recommendation engine ultimately works. In the past weeks that I’ve had more time to read and catch up on many things I had put aside, I’ve deeply enjoyed letting Zite bring content to me – not just content, but articles I like and have used as inspiration or linked posts for MacStories.

Recommendation and natural language support are complex technologies. Zite is pretty good at it already, but I’m thinking about how it could get even better in the future – imagine an app able to understand your weekly reading patterns and give you articles about gaming in the weekends and politics ahead of your state’s elections. Or a system that can track reactions to a specific event and display threaded conversations from around the web about a particular topic (example: CES, Samsung’s press conference, John Biggs’ article, my response).

When you start imagining the future of personal recommendation engines for news and social streams the line gets blurry between facts and fiction; the most incredible thing is that we’ll get there soon thanks to the work of talented developers that are using today’s devices to build personalized experiences tailored to our tastes, like Zite.

Zite is smart and free on the App Store.