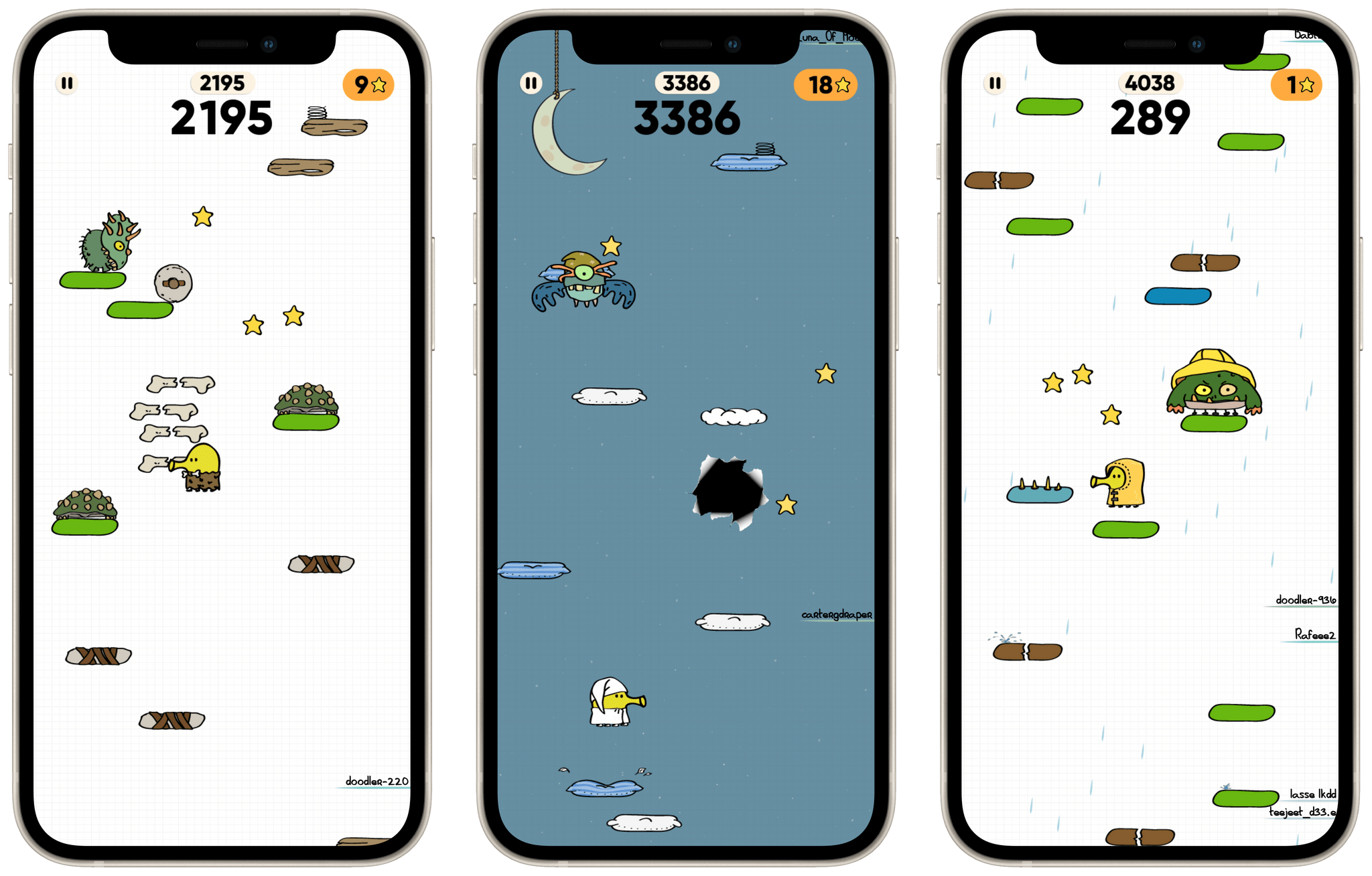 As I wrote in a recent issue of MacStories Weekly, the original Doodle Jump is one of my all-time favorite iOS games. This classic features an adorable doodle (officially dubbed “The Doodler”) bouncing its way up what appears to be a sheet of notebook paper. The beautifully simple controls consist of tilting your device to maneuver The Doodler and tapping your screen to fire projectiles at the monsters and UFOs that are trying to put an end to your adventure. The game is, at its core, an infinite runner. The higher you jump, the higher you score, and that’s Doodle Jump.

Doodle Jump’s initial release was in 2009 — an astounding 12 years ago this April. With so much time having passed since the original, I never really expected to see a sequel. This felt especially true to me since the original Doodle Jump absolutely still holds up after all this time. As it turns out though, Lima Sky — the development studio behind the game — wasn’t done with ideas for the Doodle Jump world. Last month, Doodle Jump 2 was released, and fans of the old game will not be disappointed.

Doodle Jump 2 is instantly familiar to anyone who has played the original. The controls haven’t changed at all, nor has the core idea of The Doodler bouncing its way to ever-increasing heights. However, the game’s art and animations have been completely revamped, with tremendous results.

Upon first opening Doodle Jump 2, you’re greeted with an intro screen full of static platforms with a single adorable monster wiggling around at the top of them. The monster even gets a “wiggle wiggle” note to add to its endearing nature. At the bottom of the screen you’ll find The Doodler, or more specifically a horizontally scrolling list of Doodlers. The list is numbered from 1 through 8, representing Doodle Jump 2’s eight levels — each with its own intro screen and wiggling monsters. 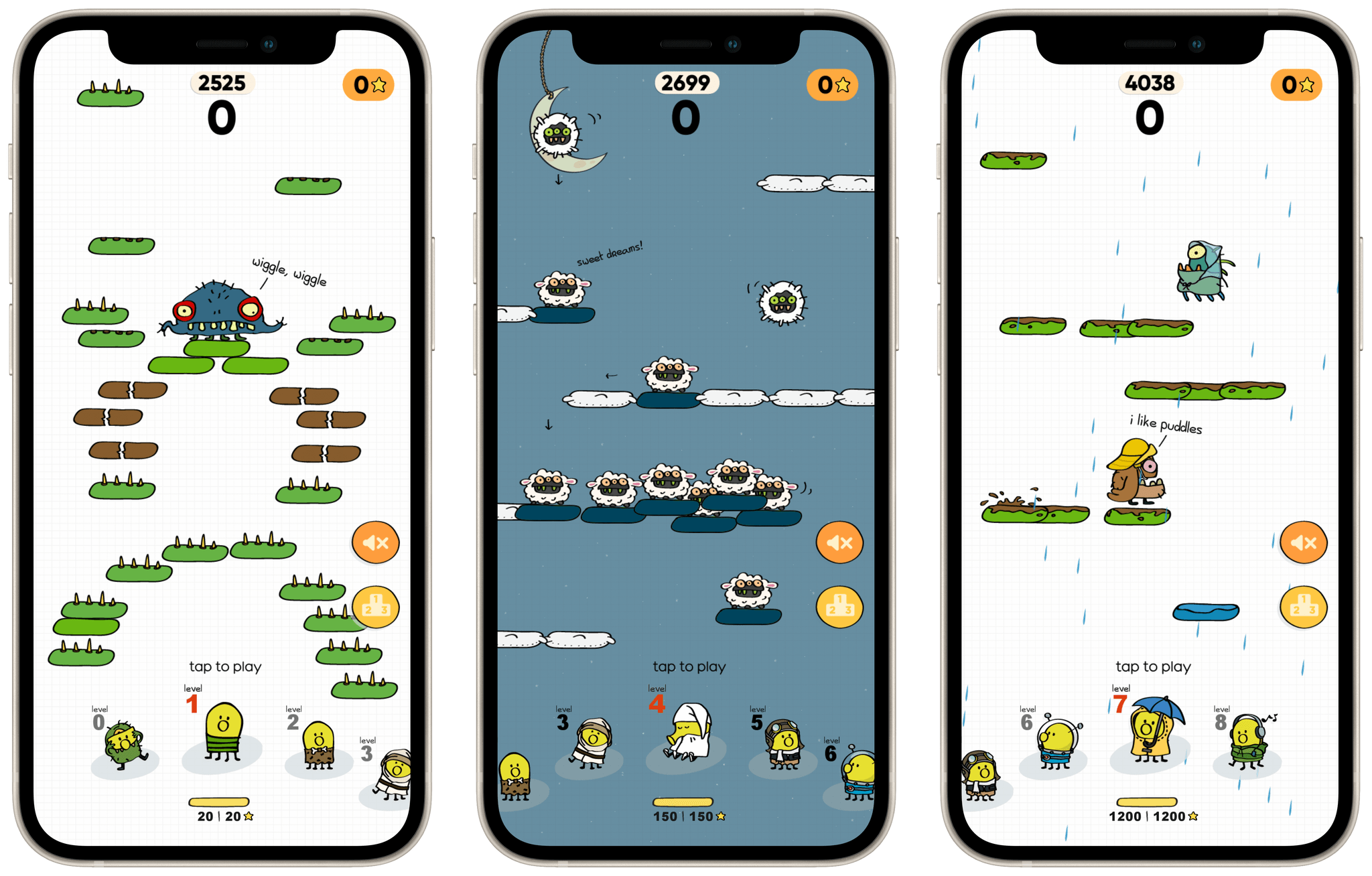 This game is chock full of hilarious and adorable animation touches. The level list contains one in the form of a “level 0” Doodler which, if you try to scroll to it, reveals itself as a monster disguised as The Doodler. This isn’t a playable level, just a cute Easter egg that sets a light and fun tone that the whole game follows.

Each of Doodle Jump 2’s eight levels (except the first one) require unlocking, which is done by acquiring stars in the preceding level. Stars are a new component that are scattered throughout the game, and whose sole purpose is to unlock levels. Your total star count persists across plays, and once you’ve collected enough stars to access the next level, it automatically becomes available. Notably, the stars continue to exist in the previous level despite no longer serving any purpose whatsoever. I wouldn’t mind this if the overall star total for the level kept going up (that way I could at least have an ever-increasing count to enjoy), but sadly the count freezes once you’ve achieved the target number to unlock the next level.

Gameplay itself is very similar to the original Doodle Jump, but all of the animations have been luxuriously smoothed out. The whole game feels more alive: platforms subtly sink beneath The Doodler’s weight when it jumps on them, pieces of broken platform ricochet off of lower platforms that they land on, and every monster has a personalized wiggle. Each time you lose, instead of the game just cutting you off, you get a brief animation of your Doodler careening down through the air. You can tilt your device during this time (it only lasts two seconds) to move the falling character around. If you watch closely, you’ll see The Doodler twist its head to face you. Its eyes stare deep into your soul, quietly judging your failure as it plummets stoically into the depths. 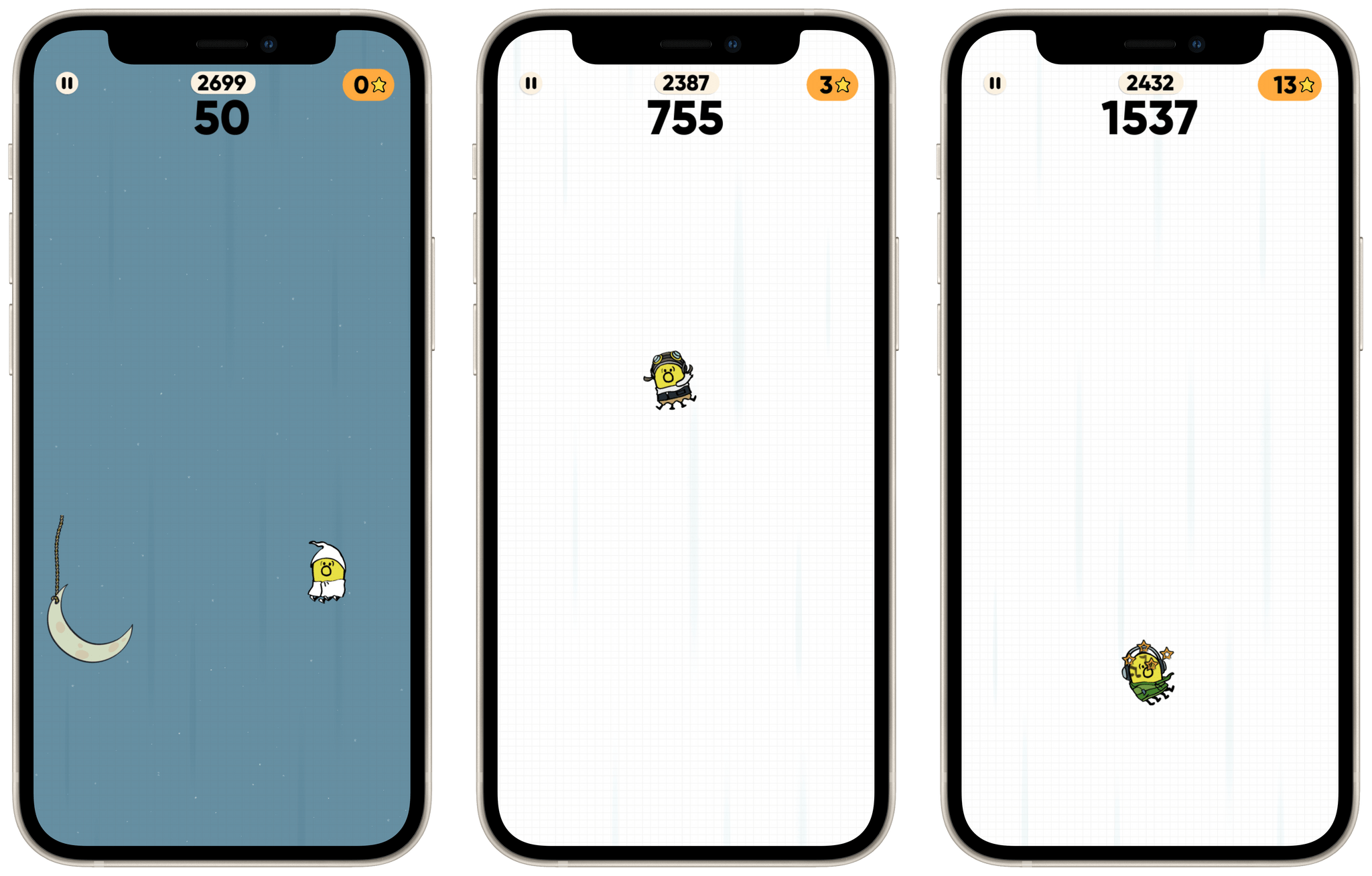 Each level in Doodle Jump 2 features an entirely unique theme, character design, and soundscape. While the first level is very similar to the classic Doodle Jump, they diverge significantly from there. Themes include prehistoric, desert, dream, aeronaut, space, rainy day, and music. The Doodler is dressed differently for each, and while the obstacles and monster types are generally similar, most of the levels include some unique challenges.

In the desert theme, for instance, all platforms are made of quicksand and they disintegrate after a single-use. This is an interesting mechanic that speeds up the pace of the game since you can rarely hover in one spot while planning your next move. The desert also includes an incredible genie monster which, given the opportunity, casts a spell to turn you into a carrot (or one of several other fun transformations). When in carrot form, you can continue to play but your projectile launching is disabled, making you a bit more vulnerable. The spell wears off after a while if you can survive long enough. I have so much fun watching the transformations that I always make sure to let the genie get its spell cast off before I shoot it down. 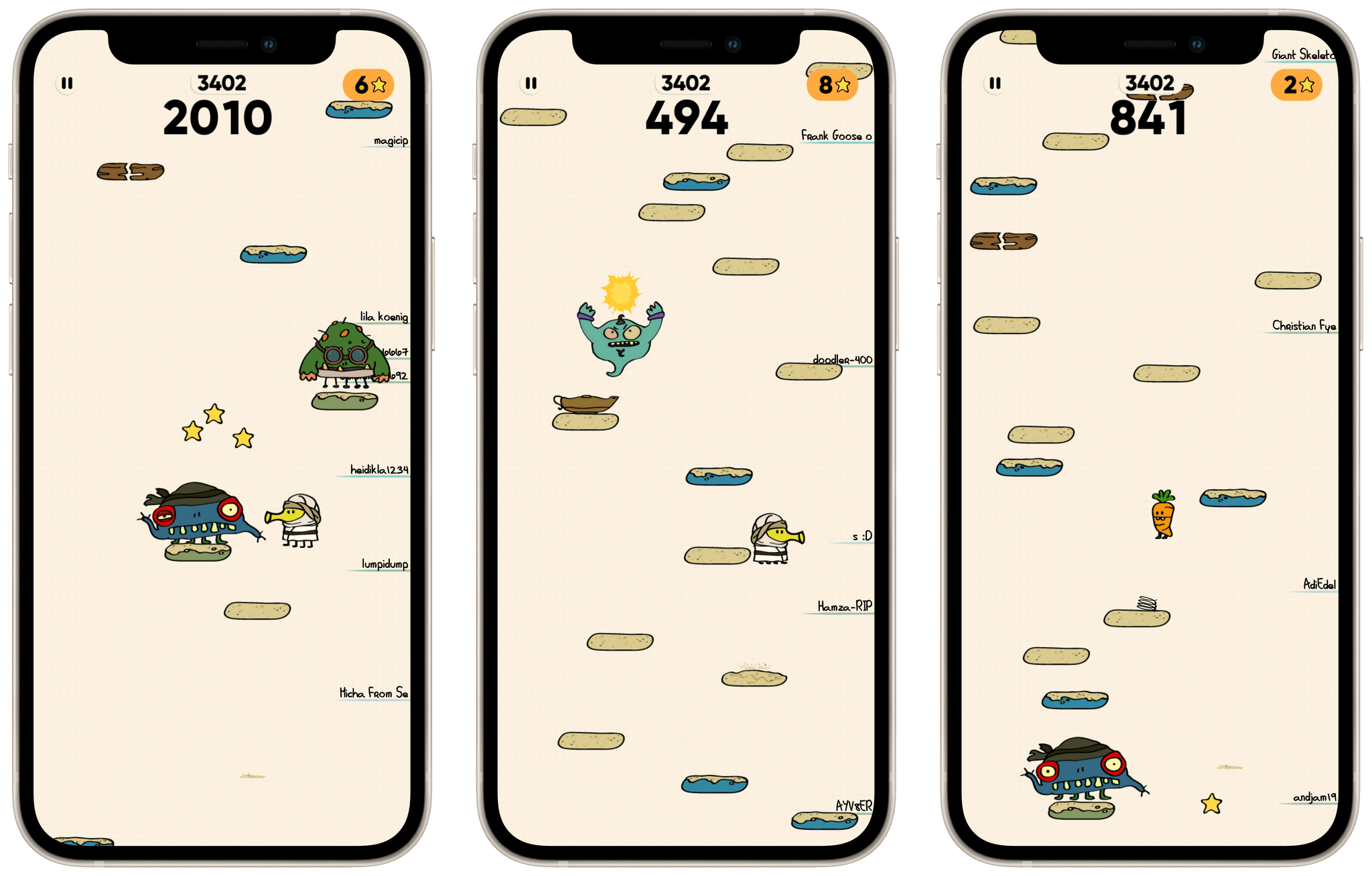 The dream theme is another of my favorites. It features a gorgeous blue background color and a moon hanging from a string in the top corner. The Doodler wears a nightcap and gown, and when he falls the moon’s cord gets cut so that it falls alongside him. Platforms here are fluffy pillows, and periodically you’ll encounter a bunch of charming sheep to count in your sleep by blasting them. 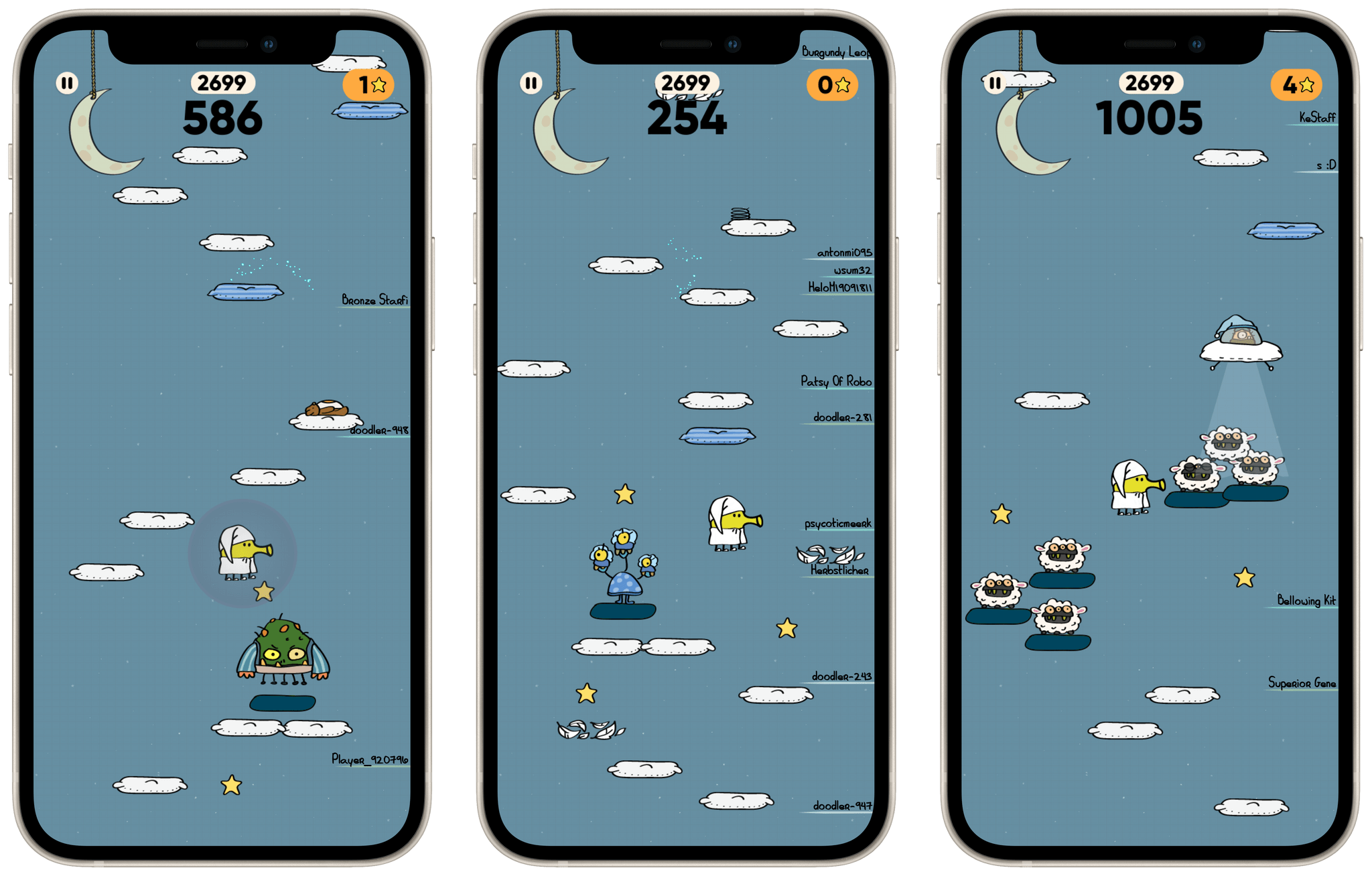 The last one I’ll highlight is the space theme, which also has a nice blue background. In space, asteroids will constantly rain down from above. These don’t hurt you, but when they hit a platform it cracks and the whole screen jiggles just so in an animation that perfectly captures the feeling that everything shook from the impact. This theme also includes a unique space alien that rides a UFO and actively shoots and destroys platforms that you are angling to jump on. If you don’t move quickly enough then this monster can destroy the platforms that you need to make it any higher. 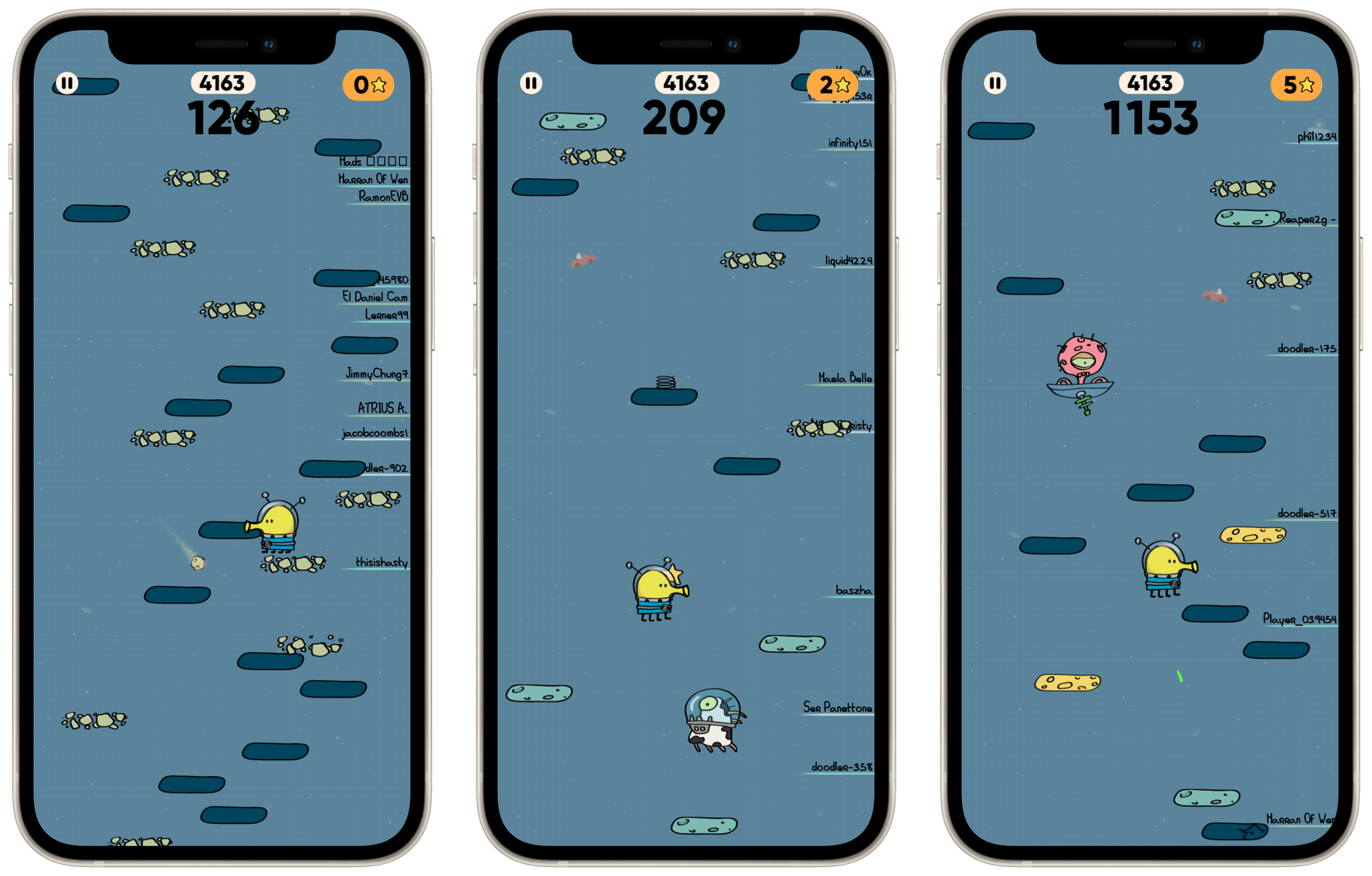 My only real gripe about Doodle Jump 2 is that the game animates platforms out of frame a little too slowly. This comes into play mostly when I’m using a high bounce like a spring or a trampoline. If I’m angling to land on a platform that’s going to be close to the bottom of the screen, it’s extremely hard to judge whether or not that platform will animate out of frame by the time I start to come down. I’ve died quite a few times because of how difficult this judgment is. By the time I realize the platform is going away, it’s usually too late to pick a different one to land on. All things considered, this is a minor concern, but I’d love to see a future update that tweaks the game to grant a bit more clarity in such situations.

Doodle Jump 2 had enormous shoes to fill, and I am delighted by how well it has done so. Almost entirely through animation, the game manages to feel completely distinct from its predecessor, yet it also maintains the familiarity of what made the original Doodle Jump so great. If you enjoyed Doodle Jump back in the day then you should absolutely spend some time with Doodle Jump 2. Even if you didn’t like the original, I’d still recommend checking out the sequel just to get a feel for the care and skill which went into the new animation design.

Doodle Jump 2 is available for free on the App Store. You can disable ads in the game for a one-time in-app purchase of $4.99.