Anniversaries are a good time to look a back and reflect on the past. I’m a relative late-comer to Apple products, but at the same time, Apple has been in my peripheral vision since before the introduction of the very first Mac in 1984. My relationship with Apple is the story that has taken a long time to unfold, but in recent years has made a big dent in my universe.

My earliest memory of Apple is the one Apple II that my school had when I was in middle school. It was the late 70s and like most kids then, I didn’t have a computer at home – VCRs were barely a thing. I took a computer class in 8th grade and learned a little BASIC on Radio Shack TRS-80s, saving my work to audio cassettes, but that was it until about 1983 when my parents bought an IBM PC. I don’t recall if our PC had 16 or 64 kB of RAM, but it had no hard drive. Instead it had two 5 1/4” floppy drives – one for MS-DOS, and the other for programs (what the kids these days call apps) and data.

Then on January 22, 1984, I saw something that struck me. Apple’s 1984 commercial aired during the third quarter of the Super Bowl. The ad itself was different and exciting. The Mac was coming.

The more I learned about the Mac, the more excited I became. But here’s the thing – my timing was bad. I went off to college later that year where unless you were studying engineering, you really had no need for, or much access to, computers. That didn’t change much when I went to law school, although I did have a Toshiba laptop with dual 3.5” floppy drives that weighed a ton and still, no hard drive.

After I left school I entered a Windows world at work. I was keenly interested in gadgets and tech, but computers served a mostly utilitarian work-related role for me. Apple was mostly off my radar until the late 90s when it was days away from bankruptcy. You see, I’m also a corporate bankruptcy lawyer and remember the very real speculation that Apple would file for bankruptcy. That never happened, which is exceedingly rare in circumstances like the ones Apple faced. When a company comes as close to insolvency as Apple did, it’s no longer really in control of its own fate. I suspect that all it would have taken to end Apple at the time was a nervous banker or two. It’s remarkable that Apple was able to step back from that ledge and not only survive, but thrive.

I’ve often thought about what that experience must have been like for those at Apple in 1997. You can’t go through an experience like that and not be changed. It’s the corporate equivalent of a near death experience and I think that in many ways, it has shaped the Apple we know today, acting as a quiet source of strength. Nearly running out of cash teaches you to do more with less. Is it any wonder that Apple operates with small teams and has a huge rainy-day cash reserve? I think that frugality has served Apple well, though I wonder sometimes whether those lessons will be lost over time as fewer and fewer people who were there at the time remain with the company.

When Steve Jobs returned to Apple, my interest was rekindled. I loved the colorful iMacs and titanium PowerBooks, but continued to use Windows PCs mostly because of work. What finally hooked me, after years of appreciation from afar, was the 4th generation iPod that I bought in 2004. I still synced it with a PC using MusicMatch like an animal, but things had been set in motion that couldn’t be stopped if I wanted.

I finally bought my first Mac in 2007 – the first Intel-based white iMac. I could list all the Apple hardware I’ve used over the years, but that’s not really the point of this reminiscence. Those are just the tools I use. The best tools as far as I’m concerned, but still just tools – which, as an aside, is why find the endless arguments over whether iOS or a Mac is better to get ‘work’ done silly and pointless.

What Apple has meant to me and what I think is worth reflecting back on today as the company celebrates its 40th anniversary, is where those tools have taken me and my family since 2007.

Around the same time as we got our first Mac, my oldest son, Owen, who coincidentally was born the same year Apple nearly failed, decided he wanted to learn to program. I had always had an interest in programming, going back to those early days learning BASIC on TRS-80s, but I had taken a different path and never seriously pursued it until recently. Like any dad, though, I wanted to nurture my son’s interest, so I started researching.

Owen started with Scratch and similar beginner languages, which were a good start, but he wanted more. There was something missing from the experience. About the same time, Apple opened up the iPhone to third-party developers. We all know where that went, but one of the under-appreciated aspects of that story is how financially accessible Apple made development when it created what is now the iOS developer program.

It used to cost hundreds of dollars to be an Apple developer. Even WWDC videos, which are now free, cost hundreds of dollars. With the introduction of the iPhone, Apple dropped the price of entry to $99, which you didn’t need to pay until you wanted to publish to the App Store, and gave away the developer tools for free. Suddenly, I could let Owen loose with Xcode and see what happened without pouring a lot of money into something that could have been a passing fancy.

But as I suspected at the time, it wasn’t a phase at all. In 2008, Owen published his first of several apps to the App Store. And there was something different about the experience. Suddenly, what Owen made could be downloaded by almost anyone in the world. He was helping younger kids learn math with a flash card app – that was mind-blowing for a kid his age. Owen is 18 now and heading off to college in the Fall to study computer science in no small measure as a result of his experience as an iOS developer.

A funny thing happened on the way to helping Owen learn to program and set up an iOS business. I got hooked too. I got to know a lot of people in the Apple community as I looked for resources for Owen. Then in 2013, Owen got a scholarship to attend WWDC. That trip more than anything sealed the deal for both of us.

For Owen, the trip was a revelation. After several years of working on apps by himself, he realized that there was this whole community of developers who made a living making apps. For me, I met many of the people whose apps, writing, and podcasts I had consumed for years. Suddenly, I got the bug to make things too. I had the tools. I just needed to make the time to turn my ideas into something concrete that I could share with others. 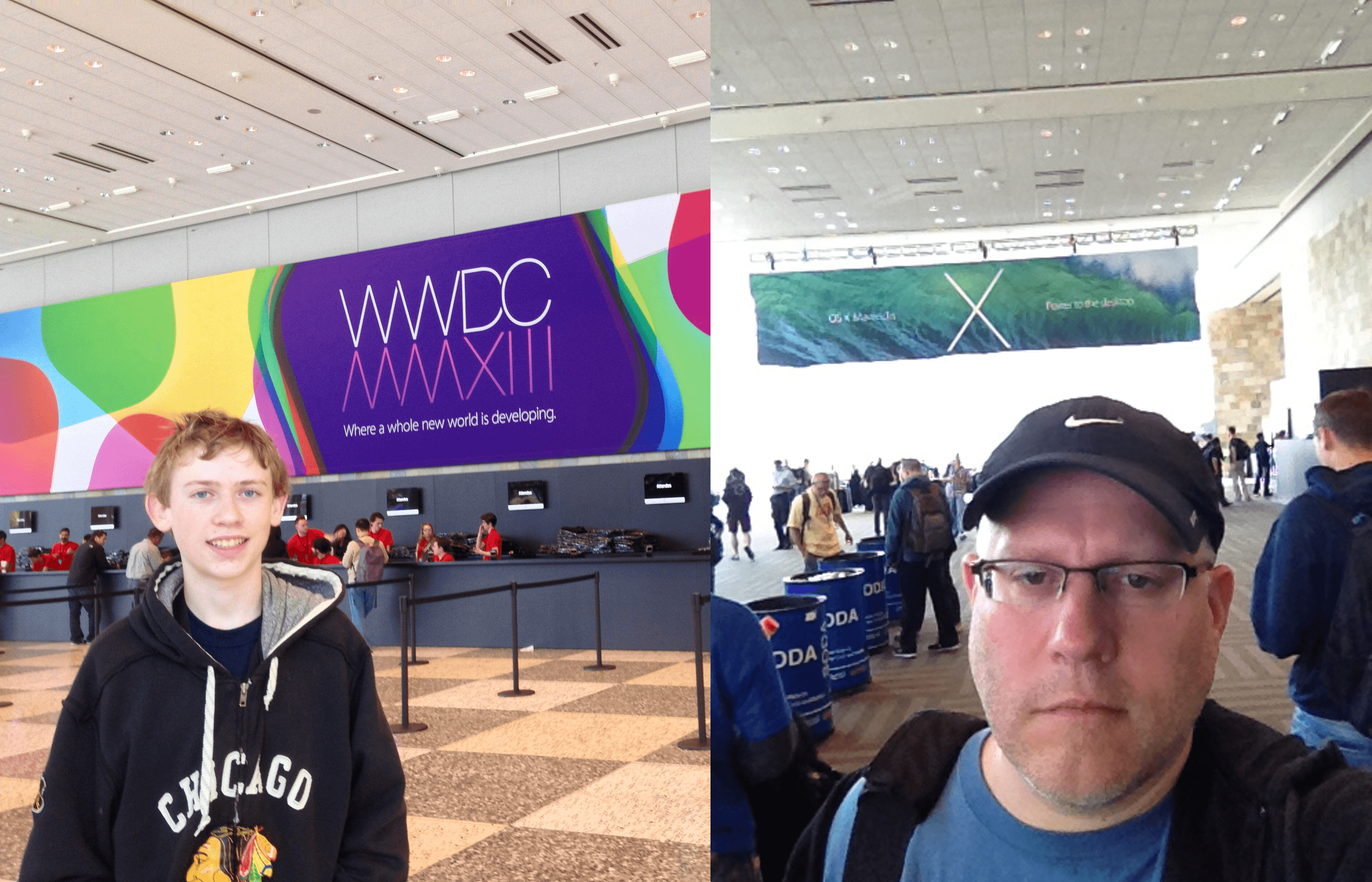 Forty years in, Apple is a strong, vibrant company making tools for people from all walks of life and inspiring new generations to create. My hope for Apple in the next 40 years and beyond is that its people remember the lessons of the past and keep thinking different, even while Apple evolves to meet the challenges of the present.