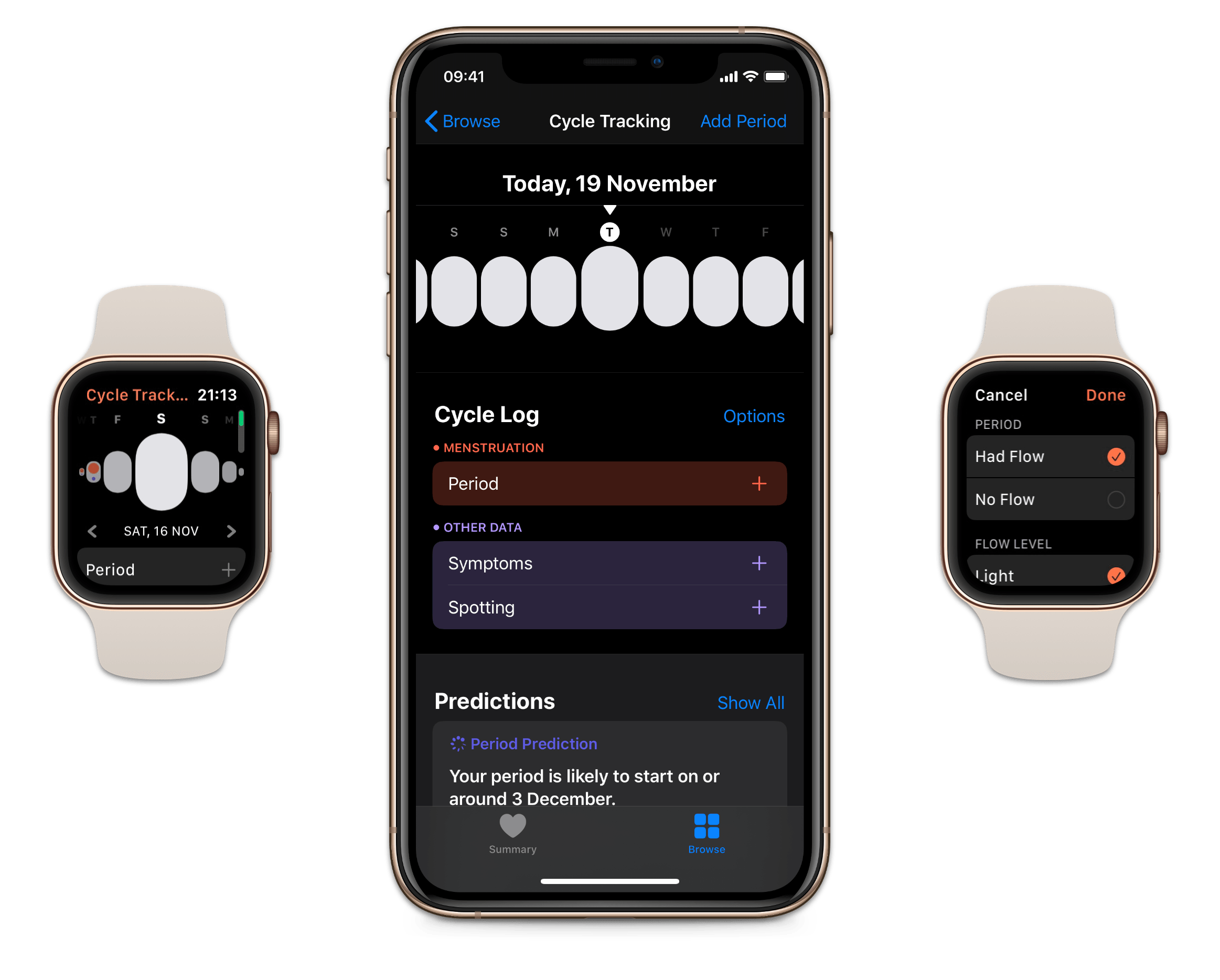 The Cycle Tracking app on watchOS and inside Health on iOS.

Menstruation is often forgotten or overlooked – ironic considering that 50% of the population experiences it. This applied to health tracking on Apple Watch and iPhone too, which for the first year offered nothing related to menstruation, but this year Apple Watch received a dedicated Cycle Tracking app, and symptom tracking in the Health app which includes fertility tracking as well. The previous absence of this feature was notable, primarily because other competing health trackers like Fitbit offered it a long time ago.

Everyone who menstruates has different needs when it comes to tracking cycles – if you should track birth control, sexual activity, fertility, and more. What I like most about Apple’s implementation of this feature is that you can turn off elements which aren’t useful for you; I’m sure many others will do the same as me and turn off the vast majority of the options. I personally get the impression that a lot of the features are targeting people trying to conceive, and honestly, that’s not me. That said, I’ve spent a few months evaluating this setup, and comparing it to previous systems I’ve tried, and now I’m ready to talk about it.

What Can You Track?

Tracking on the Apple Watch.

Cycle Tracking combines both tracking and prediction, which in many cases go hand in hand. There’s a comprehensive range of features too, so let’s see how they do.

First of all, you have the actual flow tracking. This is something that almost everyone who menstruates needs. You can provide boolean information, such as logging that there was flow or no flow, and also get more detailed by specifying low, medium, or heavy. Personally, I’ve always struggled to decide which measurement to use on a given day, but ultimately it’s entirely subjective so that’s fine; while my historical tracking may appear all over the place when I look back, it reflects how I judged things in the moment, which is what’s most important. Unfortunately, this information can only be specified once per day, so if your bleeding starts in the evening this isn’t something you can see when reviewing the information.

I’m personally a little envious of anyone who has zero symptoms to go alongside their periods, but very pleased that Apple’s system allows logging symptoms without logging flow. This is most important for the symptoms which let you know menstruation is ready to start, but also useful for those who experience ovulation cramps, letting you log throughout the approximately monthly cycle. My favourite part of this feature is that it puts your three most recent symptoms at the top, allowing you to easily access them. Unfortunately, that is limited to just three, and there’s no prediction here suggesting appropriate symptoms (based on historical tracking or otherwise) at the appropriate part of your cycle.

The sexual activity part of cycle tracking is limited. There’s simply the option to log “had sex”, and whether or not protection was used; there are no options to log which kind(s) of protection, or to log more than once in a day – the latter omission seems odd considering that the following three tracking items are focused on fertility.

The fertility tracking features, like everything else in Cycle Tracking, can be turned off – which is good for those who aren’t trying to have children, and means that anyone who has had fertility difficulties can turn off what could be a painful reminder. The three features are Ovulation Test Results, Cervical Mucus Quality, and Basal Body Temperature. Only fertility tests are actually used as part of the fertility prediction feature, but all of these features can be used if you are trying to conceive.

Spotting is perhaps one of the most useful features. For those starting to menstruate they can track this data early on, which can help give them a feeling of control or awareness regarding their body. Some people also spot when they ovulate, or for a few days before their period starts, making this an important piece of information to track if it is relevant.

Cycle Tracking offers two kinds of predictions, both of which can be enabled or disabled independently of one another: period tracking and fertility tracking.

A notification of an upcoming period - the cycle and period lengths weren’t specified in the app, leading it to make its best, vague, guess.

Period tracking works off of the data you give it about your last period. The less data it has, the more vague it gets – the example notification above is as vague as I managed to get from it: I set my cycle length and period length to undefined, and removed all data except that of my last period. While saying that my period will start sometime in the next two weeks is far from precise, it was working with a poor data set and did make a guess at least. If your menstruation is regular you can set the length of your overall cycle, and that of your period, in the options. This naturally increases the accuracy of predictions. Fertility is predicted based on the expected date of your period (13 days before it starts), and any ovulation tests you take.

Shortcuts has support for most, but not all, health data types, and as far as menstruation goes it is only missing symptoms (which I and I’m sure many others have filed feedback on), though I should highlight that it’s also missing several other new health data types which were added recently, such as tooth brushing.

With the data available in Shortcuts though, it’s possible to log nearly everything you could wish from within a shortcut. I even built one which I can include in my night time shutdown shortcut: it checks when my last period was, and if it was within the last few days, or is expected to start, allows me to log any flow directly, and then opens Health on my iPhone to let me log any symptoms. I have found this the least intrusive way of logging data, because aside from the period predictions, I’ve not found that Health or Cycle Tracking has prompted me to log data during the actual periods, so this is the most practical workaround I’ve found. 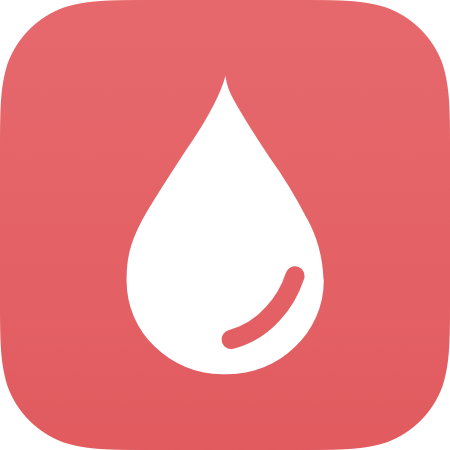 I am disappointed that Shortcuts doesn’t have support for symptom tracking out of the gate, but considering that other recent additions to health data like dental care haven’t been added, I hope we’ll get all of these in an update in the not too distant future.

Over the years I’ve had issues with my cycles and periods, and have tried tracking them on paper, and with various apps. With apps there’s always a concern – what are they doing with this data? Are they offering this purely out of the goodness of their hearts, or if there’s an ulterior motive behind it? Fortunately, I know I don’t need to worry about this with Apple, so I’m pleased to see that I have an option to track this information in a way that’s convenient to me, without needing to worry about how my data is being used. Some apps have even branched out into fertility products, which can be extremely off-putting.

Let’s start with the good: Apple’s system works, the predictions have been accurate, and the ability to quickly log data through the Apple Watch app means that when I am lying in bed at the end of the day and realize I forgot to log data, I can do it without reaching for my iPhone. The top symptoms are also useful as I (un?)fortunately tend to log the same ones again and again – though I would like to be able to prioritize some consistently.

I sincerely wish Apple offered an optional extra iPhone and iPad app which integrated with Health to display this information, both to promote the feature in the App Store, as well as to display the information differently. If you search for Cycle Tracking in the App Store, among the first results are Flo, Clue, and Ovia (Apple you can buy ads in the App Store, maybe promote your own apps every once in a while?). For me the current horizontal scrolling calendar is lacking – while it eliminates the mental calculation required when you try to map a cycle that doesn’t divide equally by 7 onto a standard calendar (a reality for many women), life means that we are familiar with it. You can sort of see a regular calendar by scrolling down to period predictions, but this only works if you have period predictions turned on. Additionally, there is no calendar format for historical data, and you can’t see anything in a calendar format without these predictions.

The lack of prompts to log information really bugs me – these apps are only as accurate as the data we put in them, so it seems like Apple missed a big opportunity to help users improve accuracy and track data. They do prompt you at the start and end of your period, but they’re missing the opportunity to get data during your actual period - something we often forget or will misremember after the fact. There are apps that keep prompting you constantly, and that can be aggravating or even overbearing or insensitive at times, but a simple “Log Cycle Data” prompt that each user could enable or disable would be useful and hopefully strike a good balance for users.

I’ve been using the cycle tracking feature since I installed the iOS 13 betas, and over time I’m finding that it works really well for me. I’ve disabled most of the options to just leave the ones I care about, which fortunately syncs over to the Apple Watch. I personally haven’t yet found any utility for the Watch complication – it’s a relatively discreet icon which doesn’t change (at least I haven’t seen it change), meaning that I went numb to it in a few days and ignored it before replacing it with something more useful.

A Note on Gender Targeting

I was pleased to see that Apple didn’t make cycle tracking and menstruation tracking into a “ladies only” event, though their keynote announcement could have done a better job acknowledging that this is for everyone who menstruates, not just those who identify as female – but the watchOS app is decidedly gender-neutral, and the Health app as a whole is not targeted at any gender. This is in stark contrast to a number of apps out there which, to my mind, do not handle this deeply personal topic with any sensitivity whatsoever.

Apple didn’t miss the mark on cycle tracking, but they got to the game late and frankly didn’t pull out the marketing guns they could have to properly promote this feature and make it a success. For me the feature works well, but as everyone has different needs I can only hope it serves a good portion of the population. My verdict: give it a try. It probably has data from any other apps you’ve been using, which will give you a head start, and if you don’t like it you can switch back to the app you’re used to. 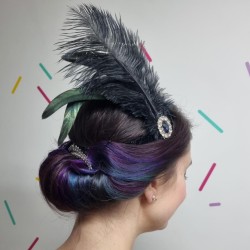 Rosemary works as a programmer by day creating web applications. When she’s not working you’ll frequently find her at a keyboard working on an automation or productivity-related article. When she’s not doing that she’s often busy hosting Automators or Nested Folders.