What a day! Apple has not only exceeded our expectations for an iPad 2, but has introduced a whole slew of new apps that bring iLife to the touchscreen. Are we completely blown away? Shocked? I think all of us are going to have a hard time coming off of this one, at least until we get the iPad 2 (in black or white) in our own hands. If you’re looking for the summary of all things iPad 2, you’ll find it right here.

So what’s new and awesome?

The new iPad is thinner than the iPhone 4. I can’t even believe those words, but the iPad 2 is 33 percent thinner than its predecessor at a depth of 8.8 mm. The iPad 2 has also shaved some weight, weighing in at 1.33 lbs for the WiFi version, with the AT&T and Verizon iPad 2s weighing slightly more at 1.35 and 1.34 pounds respectively.

The new iPad is flatter, sexier, and has that ported grill you may have seen earlier on Gizmodo or Engadget. There’s no new buttons or ports, but the mute switch can be reconfigured with an orientation lock in iOS 4.3. The 3G models have a Micro-SIM card tray (I remember that was a request in our live comments). The iPad 2 now comes in white or black: both look stunning and we can’t decide which we like better at the MacStories HQ. Fortunately fingerprints will remain at a minimum on either model, thanks to fingerprint-resistant oleophobic coating. Powering the new iPad is Apple’s dual-core A5 chip running at 1 GHz. With up to 9x faster graphics, expect lots of games to get a huge boost this year. If we’re counting 3G models, there’s technically 18 different models of the same iPad.

It was obvious that the iPad would be getting front and rear facing cameras, but we’re not sure what kind of camera is in the iPad 2.  You can record 720p up to 30 frames per second, and while still resolution photos can be captured there’s no mention on megapixels (this leads me to believe it’s the iPod touch camera - yuck). The front facing camera is VGA, and on screen controls can control exposure for video and stills. On the top of the iPad, there’s a small microphone port that created some when interesting rumors when iPad 2 cases were leaked.

The battery life remains insane at 10 hours of surfing the web and watching video, with 9 hours touted for 3G models. With this great battery life, you might be inclined to use Apple’s new HDMI adapter with your HDTV for video out, with video mirroring and video out support for 1080p content (576p and 480p with Apple’s Component AV Cable - and 576i and 580i with the Composite AV Cable).

Apple’s got all the tech specs you need right here as well. 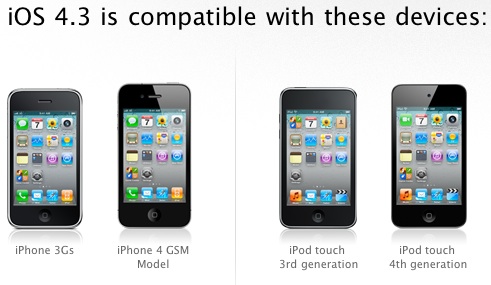 Update: What about iOS 4.3? With the Nitro Engine in place for Javascript on Safari, AirPlay everywhere, and Personal Hotspot features for the 3G iPads, you’d think all is fair game right? Not so fast. Engadget & MacRumors point out that the CDMA iPhone 4 wont’ be getting iOS 4.3 (at least initially), which leaves us wondering what the hold-up is. Too, what’s the reasoning for fragmenting your newest audience?

The iPad gets more colorful than black or white thanks to Apple’s new iPad Smart Cover. Why detract from the beauty of an iPad when you can have a magnetic cover that folds over the iPad, and is configurable for multiple positions? Magnets hold the cover to the frame - it’s essentially half of the first iPad case that comes in ten colors, and your choice between polyurethane and leather covers. A (PRODUCT)RED cover is a notable available option.

The magnets appear as a metal binder that latch on to the left side of the iPad. With four pads and three creases, the cover can roll up to position the iPad as a movie stand, or a typing stand. It’s actually quite a genius idea: Apple strongly believe that their iPad is too beautiful to remain covered, and the Smart Cover is an extension of Apple’s product philosophies. Plus, Apple is making the iPad more personal with the additional options of colors and textures (the iPod nano-ization of the iPad).

There’s so many crazy apps for the iPad that we won’t cover them in depth here, but Apple has essentially brought iLife to the touchscreen. FaceTime, Photo Booth, GarageBand, and iMovie all make an appearance, turning the iPad into the ultimate creative mobile device. Photo Booth and FaceTime are the iPad’s prominent advertised apps, with GarageBand and iMovie retailing for $4.99 each in the App Store.

Update: GarageBand will also be compatible with the first generation iPad, while iMovie is reserved solely for the iPad 2. That’s fair.

With FaceTime, you can call any mobile device such as the iPod touch, the iPhone 4, or someone using a Mac over WiFi. You can switch video between the front and rear cameras too; it’s the same FaceTime you know and love made bigger. 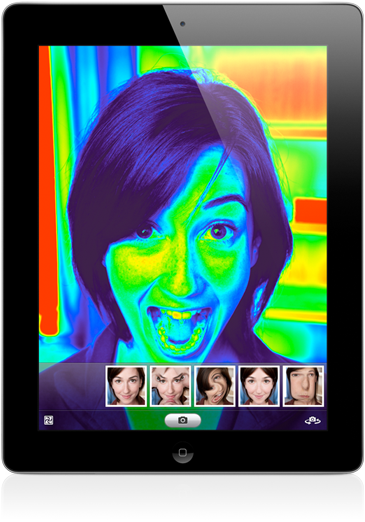 But Photo Booth might be the talk of the town, as you can mess up your face in a myriad of different ways and share the results with your friends. It’s the same intimate picture taking tool that allows you and your friends to get goofy and let your imaginations run wild.

The focus is all on screen.

One thing is clear. Apple is trying to blur the lines between the device and what’s actually happening on the display. The iPad has gotten thinner, but with a camera ultimately becomes much more intimate as you share conversations and video with friends and family. Combine this with iMovie and Garageband (both of which feature extensive toolsets), and you’ve got yourself a re-imagination of the typical PC. If you were waiting to buy the iPad, the iPad 2 is the one to buy.

The Apple Store page is up, but you can’t order just yet. We’ll keep updating this post with info if anything nifty comes along. Thanks again to all of our live coverage followers today!