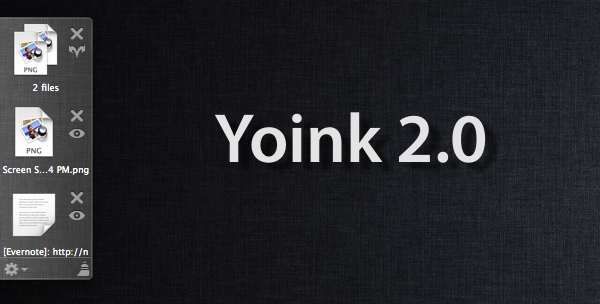 Back in September I reviewed the first version of Yoink, a utility by Eternal Storms Software that greatly enhanced Lion’s drag & drop support by adding a virtual “shelf” to the side of your screen to store temporary files you needed to move elsewhere. From my review:

Yoink is a drag & drop assistant for Lion, in that it provides you with a virtual “safe zone” to temporarily store files — or rather, links to them — you want to move from one location (say your desktop) to another space or full-screen app. Yoink doesn’t “copy” a file, or multiple ones, to its shelf: it only acts as a bridge between the original file, and the destination of the drop.

In its first version, Yoink was primarily meant to provide a better way to move files from the Finder to full-screen apps – that is the reason the app was built with Lion APIs from the ground up. Yoink 1.0 undoubtedly offered a quick and elegant way to move files around apps and desktops in an intuitive manner; Yoink 2.0, released today, is a huge step forward that now allows the app to accept almost any kind of input from OS X, from text to images and web clippings from any app.

In accessing content from apps, Yoink has become more than a simple tool to temporarily store files that need to be moved around full-screen apps – think of  Yoink 2.0 as a secondary, visual clipboard that can accept almost any kind of file you throw at it. In my tests, besides dropping content from apps into Yoink’s shelf, I’ve copied links, text and images from Safari and Chrome, and successfully watched Yoink create text clippings and full copies of the images ready to be pasted anywhere on my Mac, both in the Finder and other apps. Rich text from a web browser is converted to .textclipping once imported in Yoink, and you can easily re-export everything to the Finder, or into another app that accepts text, such as TextEdit or Twitter’s compose window. Want to tweet a famous quote by The Beatles? Drag text into Yoink’s shelf, open your client of choice, and drop your previously copied text. How about quoting someone else’s words on your blog (and this is something I’ve been looking forward to)? Drag text into Yoink, fire up your blog’s editor window, drop text.

Yoink’s new drag & drop system works with almost any app  and any kind of content – you won’t be able to preserve the exact formatting of a rich text document when copying, but it surely works very well as a lightweight solution to quickly save plain text files.

Yoink 2.0 brings a couple more interesting additions besides improved drag & drop. The interface has been redesigned to have more linen and the app can be assigned a keyboard shortcut; more positions for Yoink’s window have been added and files shouldn’t be lost anymore if they’re moved from their original location. One issue I had (and already reported to the developer) was with an alias I moved from Dropbox to my Desktop, which didn’t resolve correctly in Yoink and displayed a permission error. The error is likely happening because of some restrictions from Apple’s sandboxing technology or the fact that the alias came from Dropbox – Yoink 2.0 is capable of resolving aliases and, in fact, it worked fine with a file that was originally stored on my Desktop. 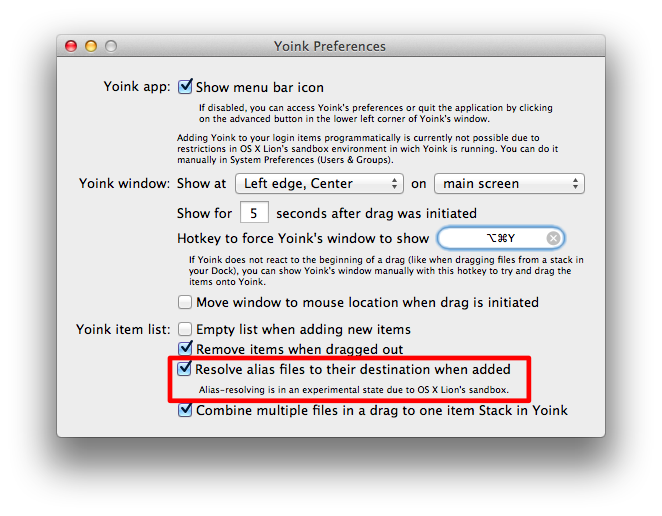 Last, Yoink now comes with File Stacks, a neat way to drag and drop multiple files into Yoink’s window and have the app combine them into one item in the shelf. This can be very handy if you’re dealing with multiple images and PDFs and you want to get them quickly out of the way.

At $2.99 on the Mac App Store, Yoink remains a fantastic way to enhance Lion’s drag & drop with an app that acts as a temporary scratchpad/visual clipboard for content that you want to copy, move elsewhere, or simple save for later. Highly recommended, you can get Yoink here.