Vox is a simple and powerful drag and drop media player for the Mac, letting you drag in folders and individual tracks to create custom playlists. The app supports just about any media format, from FLAC to AAC to WAV, and has a built in equalizer so you can dial in the perfect sound. Vox has been around since 2007, and I’m amazed that it continues to be free.

I mentioned it briefly in the footnotes when I talked about GoodReader’s iOS 7 design, but there’s so much music out there that’s not in iTunes. Upcoming artists are putting demos and downloadable Mixtapes on SoundCloud, Bandcamp has become an avenue for independent game makers to sell soundtracks, and Amazon’s willing to send you the digital equivalent when you buy physical albums. If you love supporting your favorite artists, iTunes also ignores common perks that you get when preordering music direct, including exclusive tracks, different masters, custom artwork, and swag. A lot of music ends up in my Downloads folder, and instead of waiting on iTunes, I just drag my folders of newly acquired tunes into Vox. 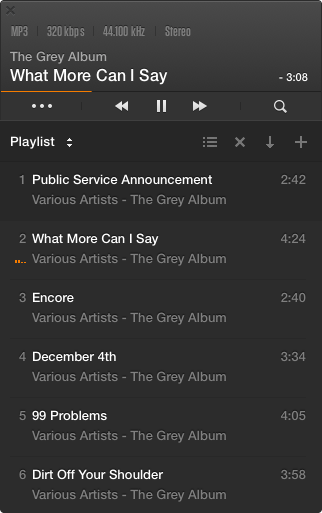 The only thing I really don’t like about Vox is how playlists are saved — the app should just ask you for a name without asking you to save an XSPF file somewhere. The app needs to handle that stuff for you.

But that minor quibble is otherwise overshadowed by what’s just a great media player. Vox 2.0 completely refreshes the mini-player, and it’s downright smart. Collapsing the playlists and taking focus off of Vox shows scrolling artwork behind artist, album, and song info. Hovering over the player brings up a set of new controls for continuous play, shuffling music, and setting the volume. The volume scrubber is scrollable with the trackpad when the cursor is over it, a nice touch if not a tad too sensitive. A drop down equalizer has also received a makeover, and contains usual presets such as Rock, Hip-Hop, Full Bass, and more. 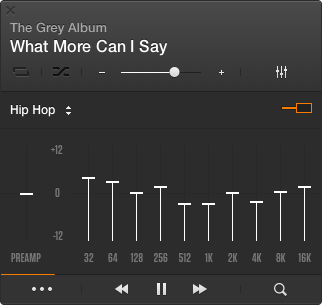 My favorite thing — and if I built a music player it would work just like this — is that when you drag music onto the app, it asks if you want to clear the playlist first or if you just want to add all the new music. And the app just starts playing it if you choose the former. It’s gratifying.

The meat of the application really lies in its preferences, which I don’t really dabble with too much since the default options more than meet my needs. Vox gives you a lot of control over its behavior, such as keeping it pinned on top of other windows, if play position is saved, when artwork in the mini-player is shown, etc. It’s also where you can enable settings like Gapless PLayback, crossfading, and “watched folders” via an autoload option. Vox even asks you if you want it to be the default music player for any file formats iTunes doesn’t accept when you load up the app for the first time. In the preferences you can also connect to things your Last.FM account.

Vox lets you disable notifications, which I like because I really don’t see the point of having the last five or so tracks in the Notification Center. I’m looking at you iTunes.

Provided Vox becomes your primary player, you can set hotkeys for Play, Pause, and Volume, or download an extension that integrates the app with your MacBook’s or Apple keyboard’s media keys. Because the app is sold in the Mac App Store, Apple’s rules prevent this functionality from being built-in.

A relatively big but hidden feature in Vox is its Radio function. A $2.99 in-app purchase unlocks the ability to listen to online radio stations. I prefer Radium (and more recently TuneIn on anything that’s not a Mac or iOS device) for listening to tunes around the world, but the functionality is certainly there if you want an all-in-one solution.

If you download a lot of music outside of traditional avenues, Vox is worth downloading. The app is free to download from the Mac App Store, and can run on Macs running OS X 10.7 or later.