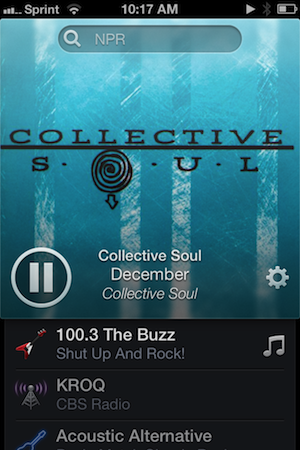 Perhaps uniquely to me, radio is a social gathering, since the radio and not the television is the thing my family and I always convene around instead of the television. We’ll listen to terrible singles and complain through them, and we’ll joke about how every artist feels like they have to fill in dead air by shouting a repetitive string of “yeahs” or “oohs” or other provocative exclamations. Then the next night there’ll be a string of great songs, and maybe it’ll get a little quieter at the table as we listen in.

As a consequence I’m used to radio becoming the thing I have on in the background. You get to know all the songs, the loops they run on, the voices of the DJs and reporters, and it just becomes this sort of comforting noise machine. Why go to Starbucks and soak in the ambient noise[1] when you can turn on the radio?

Sometime in college, I happened across Radium, and I had this instantaneous attraction to it. Imagine my excitement when I discovered I could actually bring that comforting noise machine to my desktop! At the time it didn’t play what was locally airing over FM, but it did bring Internet radio to the desktop through a simple search bar and drop down menu. What made it stick for me was that instead of browsing by station, Radium let you browse by what you were into. It surfaced relevant stations that fit any number of queries from “90’s acoustic” or “covers.” And you’d actually find stations that fit those descriptions.

By the time I got an iPhone, I figured Radium would have made it onto iOS with a big shiny yellow icon, matching the style that pervaded it on the desktop. Not yet.

That was a couple years ago. Today, Radium has arrived on iOS, not with the classic radio I imagined it would be identified by, but by a chocolate drop that’s become Radium’s unusual characteristic since the launch of their updated Mac app earlier this year. 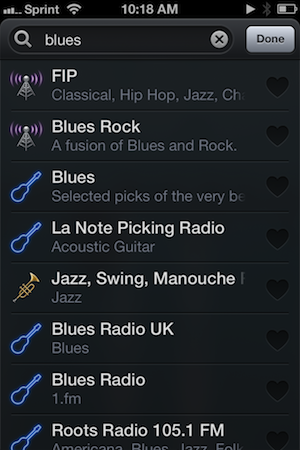 One might wonder how a menu bar app dependent on search would translate to the iPhone, yet CatPig Studios have pulled it off, drawing your attention to all the right places and making what should feel like a sparse list of radio stations feel like a traditional music player, alive and full of personality. It becomes immediately obvious that you should play something, with instructions limited to a lack of artwork and example queries that flash in the search bar. As you begin to search, cover art falls away, and the app searches and updates stations in realtime as you enter your query.

What you can listen to is virtually unlimited as far as Internet radio goes. Radium claims to support over 8,000 stations, which includes NPR and BBC radio. It supports ClearChannel stations, meaning that I can conveniently listen to a local radio stream without having to go through a Flash player on the web or download the iHeartRadio[2] app. If you’re a Sirius XM listener, you can plug in your account info and stream satellite radio straight to your iPhone over an Internet connection. The app also supports other providers such as CalmRadio for classical music and Digitally Imported for electronic music. It’s absolutely convenient and a hallmark of what made Radium such a great app on the Mac. 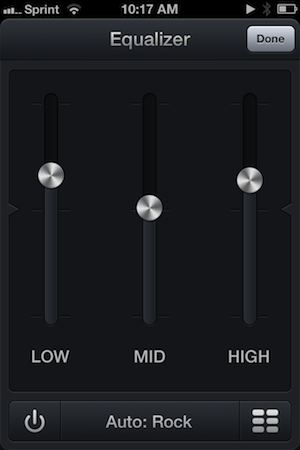 All of the great features that are found in the Mac app can also be found in the iOS app. Tapping on album artwork, provided there’s song data, lets you add the song to a wish list or view it on iTunes to purchase. There’s also a sharing button for copying track data or the station link so others can listen-in. And if you have a Last.fm account, you can plug in your account so you can scrobble and love tracks as you play them. The equalizer is also present, automatically choosing a preset based on what’s currently playing, which you can turn on or off by pressing the inconspicuous power button. Each station is accompanied by a glyph describing what kind of music it plays, and you can change that by tapping on the icon in your list. 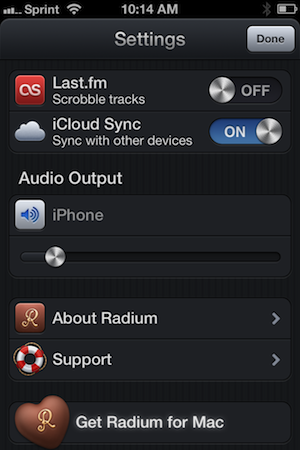 The big difference between the iOS and Mac apps is that the iOS app is even more delicious.

There’s something gratifying about tugging at the artwork, pulling it down towards the bottom of the display and watching it snap back into place. On cue, the pause button quietly reappears with artist and track info, unwilling to wait for the animation to complete its preprogrammed bounces. Then you’ll flick the other direction and watch the artwork similarly bounce into place above the station listing, the pause button becoming the deciding anchor for the height of the now playing information at the top of the display. It’s possibly rubber band scrolling at its finest and it’s a detail only an app on the iPhone could pull off.

With iOS 7 on the horizon, one might wonder whether Radium is relevant given iTunes Radio, and the possible but unconfirmed inclusion of traditional Internet radio stations currently found in iTunes’ directory. My gut feeling says that Radium and iTunes aren’t competing on the same turf, with Radium’s obvious advantage being the Sirius XM and the ability to play back radio stations traditionally locked to particular content providers or apps. CatPig Studios are in the business of letting you tune-in to the rest of the world, while iTunes and others are in the business of generating personalized playlists labeled as radio.

Radium has been one of the apps I’ve always thought would be a good fit for the iPhone, and it’s finally here. It’s the same Radium you know and love, adapted to iOS and imbued with charming details that make themselves evident as you scroll, flick, and swipe across the interface. It’s Internet radio in your pocket, and it’s impressively inexpensive, regularly costing only $3.99 on the App Store. Until September 3rd, however, you can pick up the app for only $1.99 as part of an introductory promotion.