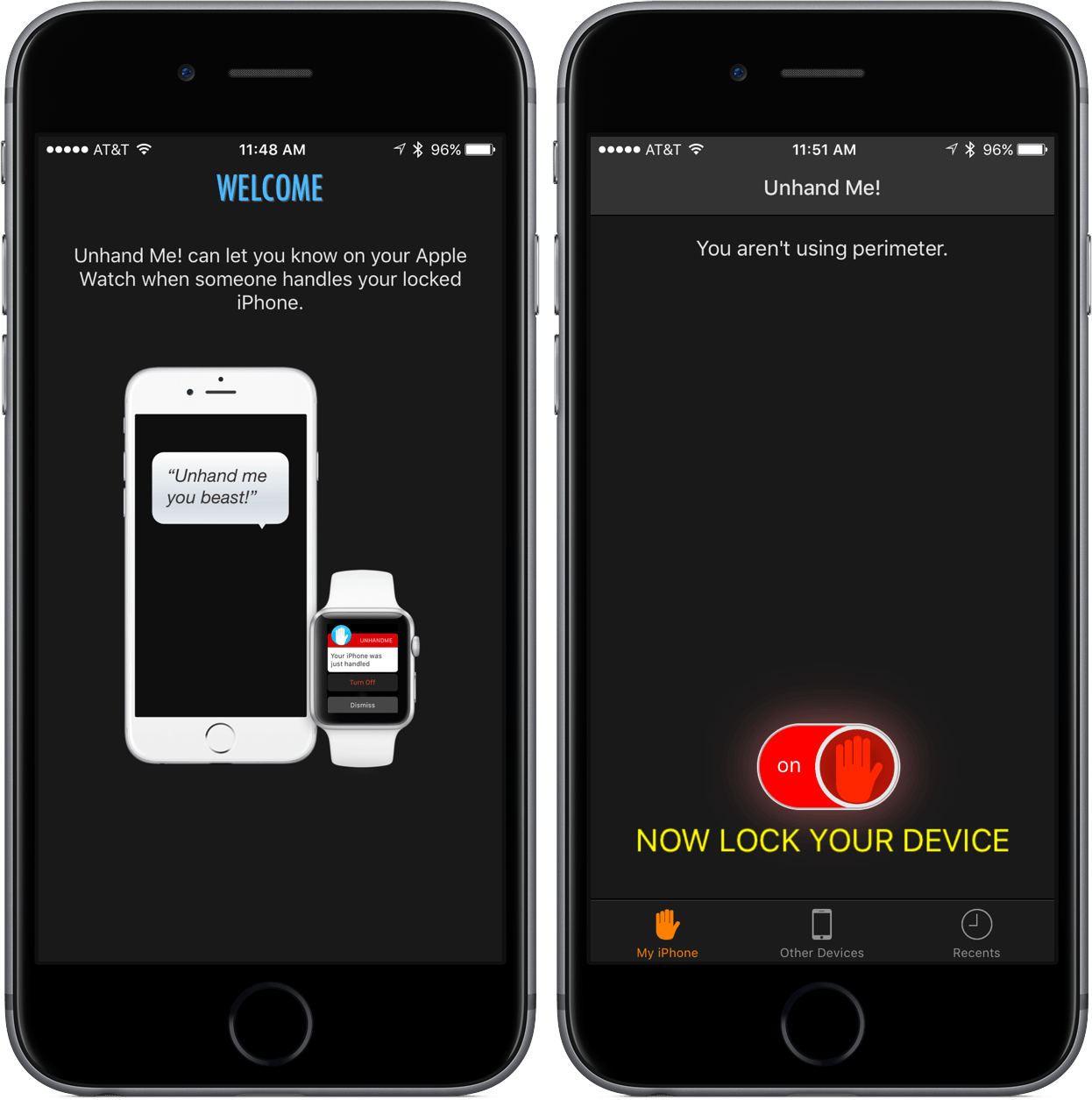 Unhand Me! comes at a time of Apple Watch app confusion. Some developers have chosen to create apps that keep most of their functionality for the Watch; other Watch apps are smaller versions of iOS apps with some added features.

Unhand Me!, which is an app that notifies you when your iOS device has been handled, is an attempt at the latter. Through actionable notifications or the Watch app, Unhand Me! can be a must-have for those who own an Apple Watch. But even for the smartwatch skeptics, this app is one to strongly consider downloading for the safety of both your hardware and data on your iPhone and iPad. 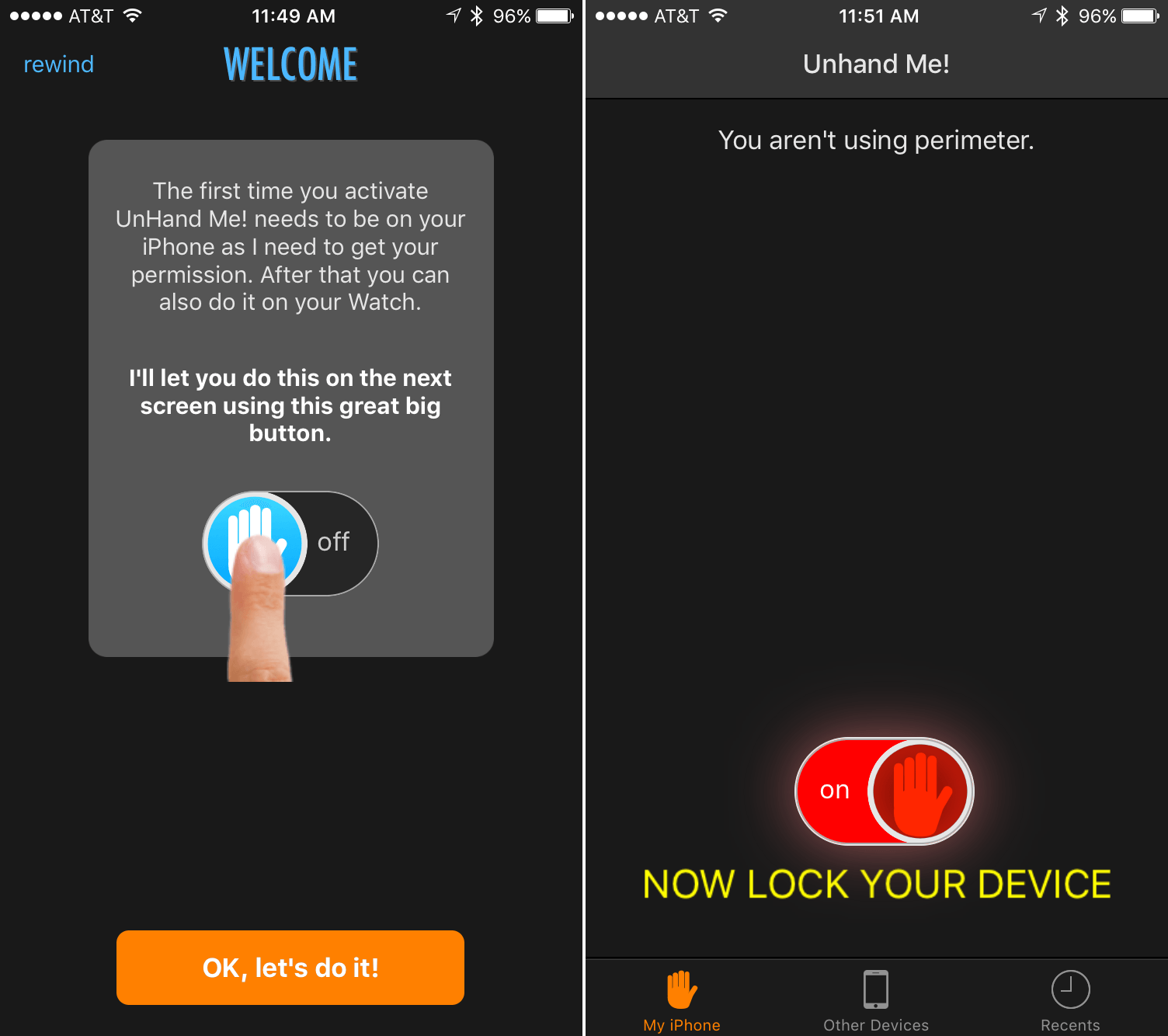 First, a warning: when setting up Unhand Me!, do not try it in a public place unless you are absolutely fine with the app talking to you through your speakers. Within the first few seconds, a very audible “Welcome!” is unexpectedly played and caught me off-guard immediately. It would seem like the developers were looking to demonstrate the voice feature early, but it’s an unnecessary step.

Unhand Me! aims to deter thieves by using voice and sound to draw attention to your iPhone or iPad once picked up. In addition to the very obvious audio, the app also pushes a notification to a specified device. From here, you can turn off the alarm or take the necessary action.

It works - and that basically confirms it as an instant purchase for a lot of people, including me. Whether through a notification or the sound coming from the device, you’ll have enough time to know that someone is attempting to tamper with your property. Pairing with another piece of iOS hardware through an in-app generated QR code is an easy process and lets you receive different notifications for different devices.

Getting it to work is as easy as flipping a big switch on the home page of the app on the iPhone, iPad, or Apple Watch. On the Watch, Unhand Me! can also be launched through a complication. Once turned on through the Watch, your phone will provide verification with an audio cue. In the settings menu that I’ll discuss later, you can eliminate these sounds at the risk of trusting the Watch. This isn’t ideal and in future updates, I’d like to see an option to change to a simple text notification on the Home or Lock screens.

Perimeter and the Changing of Sounds 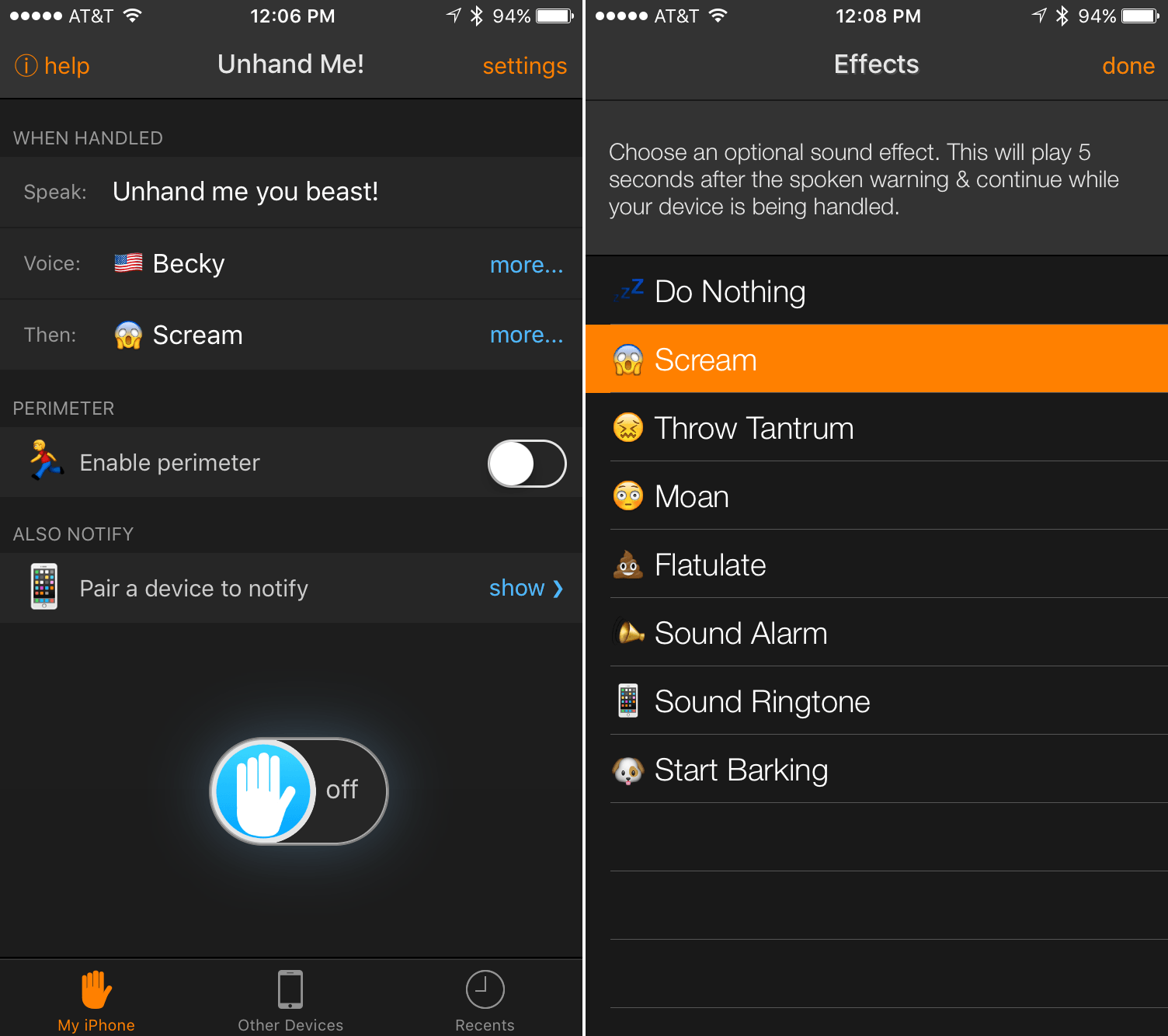 One other feature worth noting, even though it’s off by default: Perimeter. When activated, the handled property will send notifications to other devices and tweet its nearest location using your Twitter account. Notifications can be turned on without tweeting, however. By default, these two actions will take place after the iPhone/iPad is taken 328 feet from where Perimeter was initially activated.

Unhand Me! also offers a variety of options that gives you the opportunity to change the voice, saying, and effects when the device is handled. There are dozens of voice options in many different accents, but the sounds are limited. Some, like “moan” and “flatulate” will make carrying a stolen phone more awkward; I tended to stay with “sound ringtone” because of its high-pitched nature. You can also tell your voice of choice to say anything, so you’re free to make it as sensible or strange as you wish. 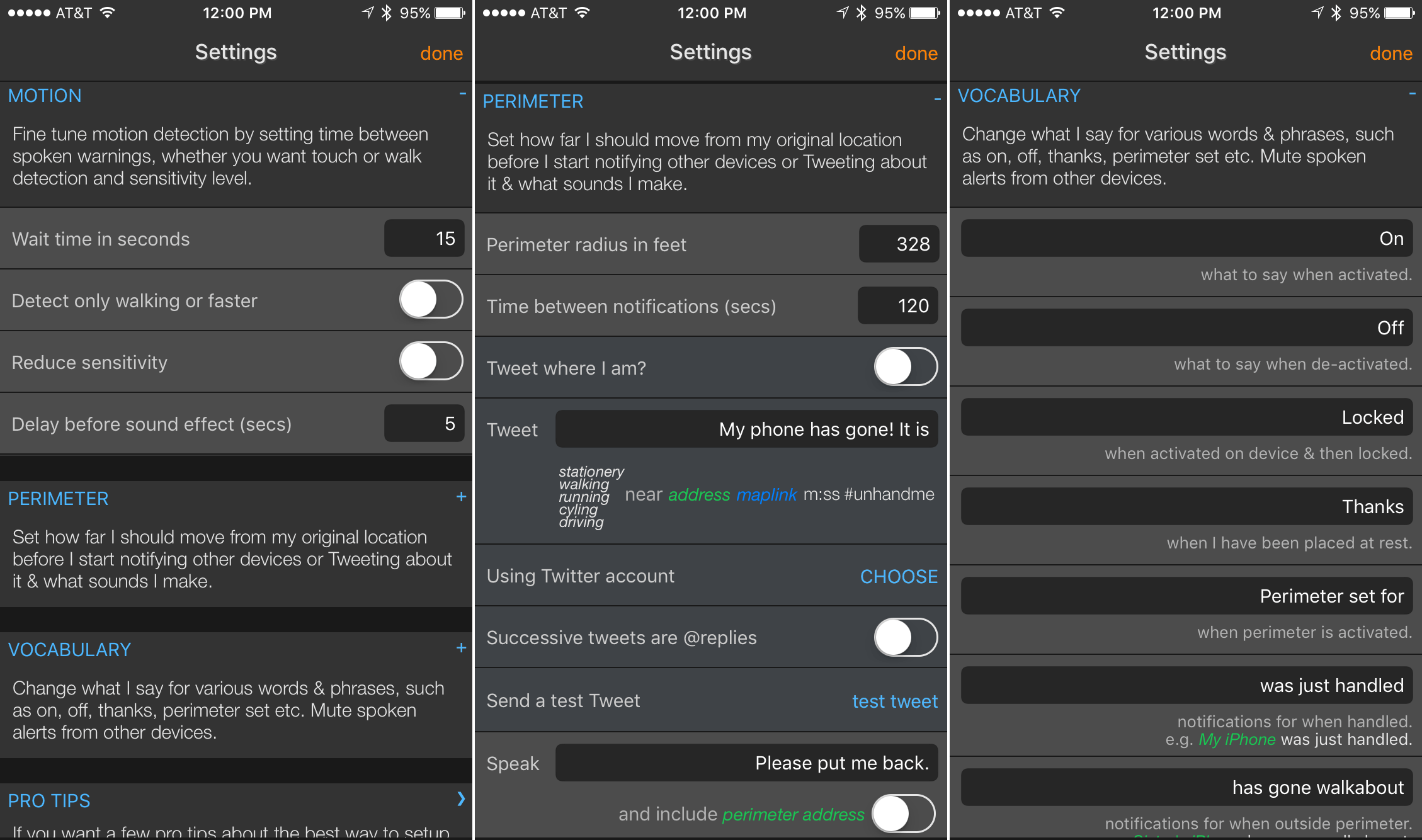 In order to make Unhand Me! work at its best, developer Tantsissa has provided settings that allow for rich customization. Located at the top right of the screen, tapping into settings shows drop-down menus for categories like Motion, Perimeter, and Vocabulary.

From here, you can change the time between notifications or to sound the alarms only when the device is walked with. Want to change the distance the phone or tablet can go before setting off the perimeter alert? You can do that. Need to change what the voice says when doing a specific action? Simply tap on “Vocabulary”.

On the same screen, you can also find some tips and contact information, Twitter accounts, and other miscellaneous options.

An App You’ll Use, Whether on Apple Watch, iPhone, or iPad

For most Apple Watch owners, third-party apps are more hassle than they are worth. However, using Unhand Me! on the Watch is a simple and pleasant experience that will provide piece of mind. But even without the Apple Watch, using Unhand Me! between multiple iOS devices will give you an extra step in the case of tampering.

There are some improvements to make, such as the disruptive audio messages when first opening and using the app. Furthermore, Unhand Me!’s voices sound robotic - a nitpick, but a change that would make for a better experience.

With Unhand Me!, I’ve found an app that I may not use on a daily basis, but one that will be nice to have when I need it. Whether you’re looking for hardware or privacy protection, UnHand Me! can be found in the App Store as a Universal app for $1.99.