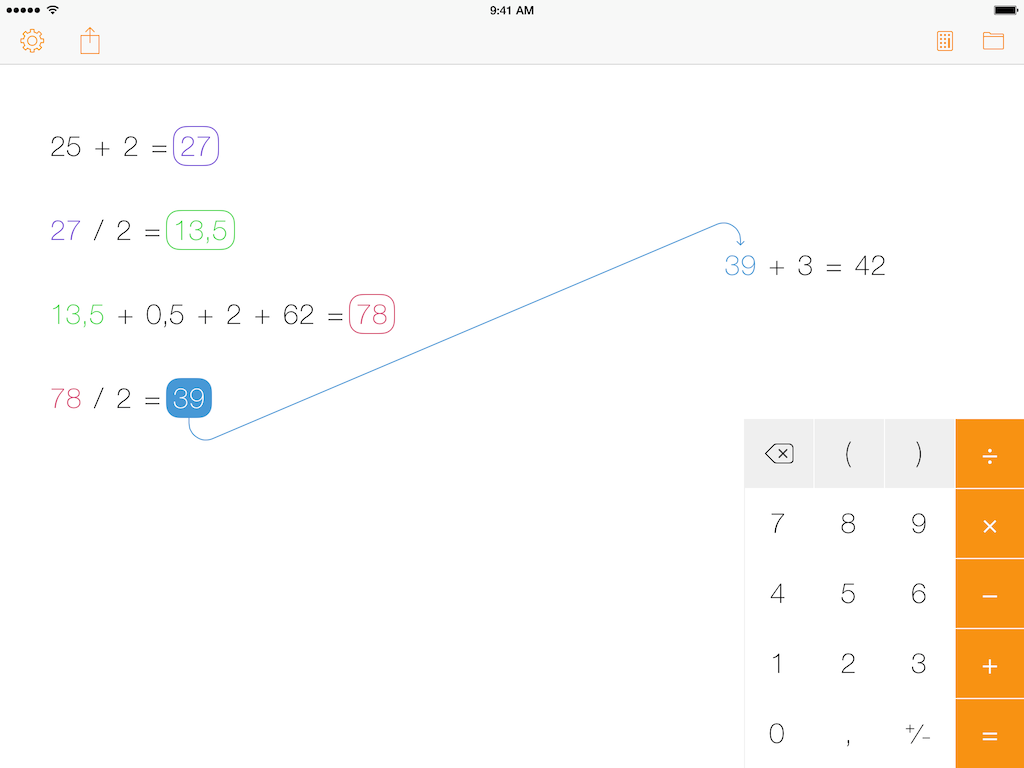 Developed by Andreas Karlsson, Tydlig wants to reimagine how a calculator should work in the modern age of iOS devices and multitouch screens. Rather than mimicking every aspect of old physical calculators in the transition to pixels, Tydlig eschews conventions by turning an iPhone or iPad’s screen into a canvas where numbers can be placed anywhere, linked together, and rearranged. The result is a breath of fresh air into the landscape of iOS calculators, but it also takes a while to get used to it and it likely won’t appease purists.

Tydlig is a revolutionary new kind of calculator for iPad and iPhone that sheds the legacy limitations of old devices, for a truly modern experience.

Why do most iOS calculators look like someone taped an old plastic calculator to the screen? How come calculator apps still have buttons like MC/MR/M+/M- when there is enough room on modern devices to store all numbers you could ever think of?

And to get a better idea of how Tydlig works, here’s the app’s official promo video:

I bought Tydlig on the App Store two weeks ago, shortly after version 1.0 was released, and since then the app was updated to 1.1, which added an iPhone version and made the app Universal. I’ve been using Tydlig to perform simple calculations as I’m not an advanced user with complex needs; keep this in mind as Tydlig is partially oriented towards the power user who needs functions and graphs and I wasn’t able to test or take advantage of those features.

Tydlig is a free-form calculator with a number pad that doesn’t take up the entire screen and that comes with support for drag & drop for numbers and results. Think of MindNode, only for numbers and without Smart Layout or the concept of “main” nodes: Tydlig lets you treat operations as individual branches that, however, can be linked together with results updating throughout the sheet as you make changes. 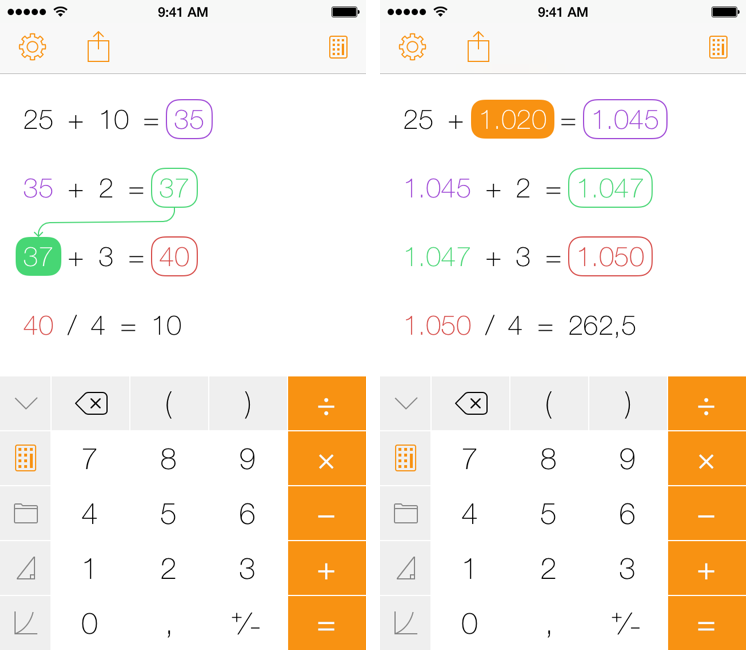 On the iPhone, keys are displayed in the bottom half of the screen with operations highlighted in orange and switches on the left to access functions, graphs, and dismiss the pad; to quickly clear a document, you can swipe over the backspace key and it’ll turn red, allowing you to start from scratch with an empty document. On the iPad, where Tydlig was initially released, the calculator is most surprising as it isn’t blown up and placed in the middle of the canvas: instead, there’s a sidebar on the right and a button in the top right corner to switch between numbers and more functions. On both platforms, tapping the screen will hide/show the pad; on the tablet, tapping any number in the document will bring up just the basic keys as a floating widget in the bottom right.

The app’s main idea is that you can type anywhere and perform calculations. As you type, results are highlighted after you hit the equal sign and continuining an operation after getting a result will automatically use the result as the first value on a new line, linking it to the operation above it with a colored line. 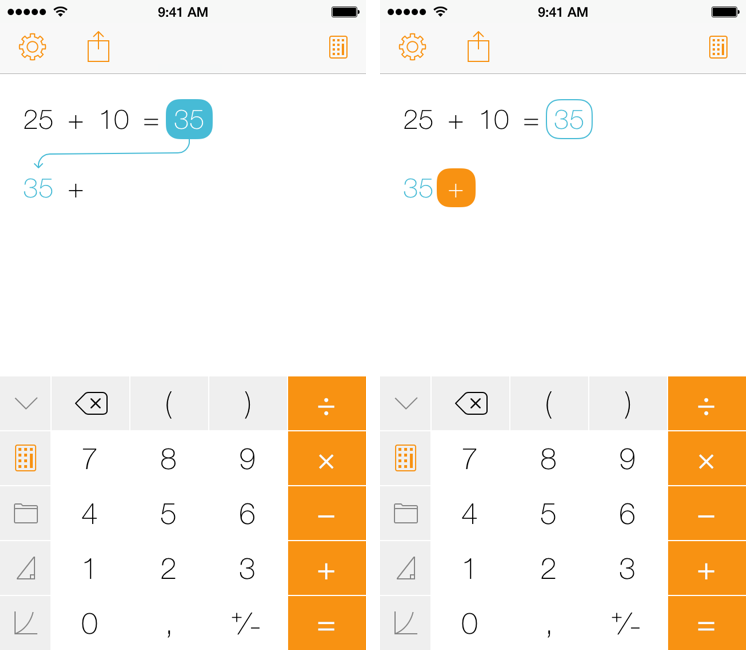 To me, Tydlig’s most impressive feature is how its mindmap-like approach makes calculations more visual when combined with responsive results and linked numbers. Let’s say you’ve run a series of additions or subtractions and their results are all linked together, but then you realize that one of the initial values were wrong and you need to tweak it. In a traditional calculator, you’d have to start from scratch; in a traditional calculator app, you could see the stack of operations (and perhaps copy it) if the app has a History feature; in a spreadsheet, formulas update automatically but you’d have to use something like Numbers or Excel, which can be a chore for many people. In Tydlig, simply selecting a number anywhere in a “tree” of operations will update subsequent items in real-time, as you type. It’s reminiscent of apps like Soulver and Calca, but with less typing. 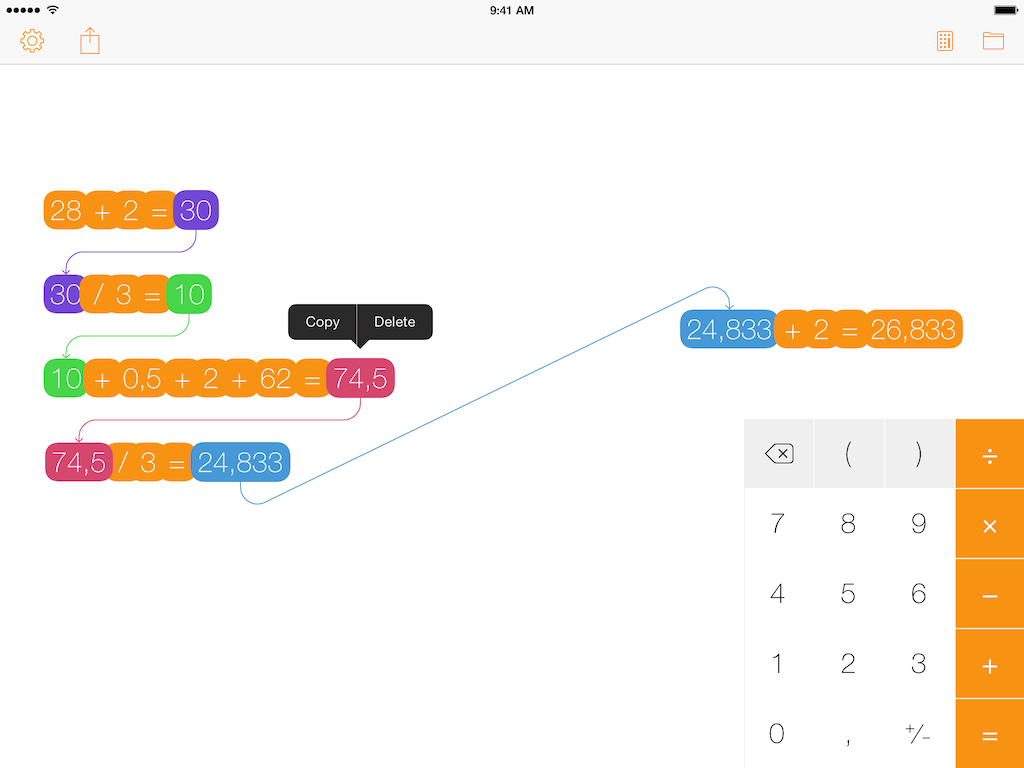 Tapping & holding on the screen gives you different shortcuts depending on the gesture’s activation area: if you tap on the document, you’ll get a popup to quickly add a new number of graph; if you tap on numbers, the same menu will let you select an entire group, select all numbers in the canvas, or, for linked numbers, unlink from the parent item. Numbers can be dragged around, placed inside existing operations, and you can keep typing without worrying about the “end” of a the page because Tydlig’s canvas will keep on expanding, again, like a typical mindmapping app.

Tydlig is fun, it looks great on iOS 7, and it can be a powerful tool in the right hands. I like how numbers and operations are given visual hierarchy and context without adhering to a rigid layout and structure, and I’m impressed by responsive results with links between numbers.

Because of its different approach, however, Tydlig won’t be praised, understandably, by people who rely on classic calculators: I’m not sure whether for scientists, engineers, and other people working in professional environments Tydlig can become a serious tool or remain an intriguing experiment. Some aspects of the app’s multitouch interactions are questionable even by someone like me: the lack of a smart layout snap functionality forces you to constantly pan around in large documents, sometimes hiding lines until you swipe – which is especially annoying on the iPhone’s smaller screen. When using drag & drop to place numbers elsewhere in a document, the app will replace previous items (such as results that don’t know where they come from anymore) with a question mark without telling you why the error is there. I’m really curious to read other people’s reviews of Tydlig.

Like any new innovative approach to an existing segment of software products, Tydlig will find critics and fans. For my limited use case, I think that Tydlig shows how old ideas can be rethought and improved thanks to new technology – the app’s UI will be particularly interesting in schools for younger kids in my opinion. Tydlig works well and has a lot of potential – there are several features that could be improved or added without necessarily making the app more complex. Tydlig is $4.99 on the App Store.